The “Clean Eating Challenge” was taken on by my husband and I two weeks ago. I found it online here: Crazy-Ass Challenge
This seemed manageable and actually realistic, since it contained actually meals, not just liquid. We also made a deal that if one of us bailed, we owed the other $100 for each week we didn’t complete. That, and the fact we spent a ton on groceries, kept me in line. But, let me be honest—this was fucking HARD!

We went into this not because we wanted to lose weight, but because we wanted to clean out our systems of some unhealthy habits. Both Dan and I are pretty addicted to beer. Ok, addicted sounds bad, but it is a known fact that we love our craft beer. We usually have at least one beer a day. For two weeks, we had no beer. I crave my salty snacks, especially my Mrs. Renfros green salsa and tortilla chips. Dan craves ice cream and candy. We gave that up for two weeks of clean eating.

How much did this cost? Well, we estimate we spent $600 for the two weeks of food. Yes….that’s a lot of cash. Especially up front. But yesterday, we sort of ran the numbers, and it seemed alright….so, $300 a person for two weeks of meals. $300 divided by 14 days is $21.43 a day. We also have some leftover food. Some of the perishables will have to be composted, but the frozen fish is fine. Also, since we did not eat out at all, that makes this $600 ok for us. Dan and I go out usually once a week, and after all is said and done with meals and drinks, we usually drop $100 each time. Easy.

The one killer about this diet is on the site it claims you will FEEL GREAT! Have SO MUCH ENERGY! Yeah. About that. LIES. Dan and I were exhausted every damn night. I went to bed around 9 pm almost every night the second week. This diet did not take into account our activity level, so we were definitely malnourished. Some would say we were starving ourselves. Dan does intense labour as a landscaper and arborist during the day. I had just started my marathon training and did 30 miles and 35 miles each week, respectively. In that first week I did the Millarville Half Marathon and was so lethargic. Yesterday I did a 14 mile training run and I wanted to curl into fetal position. My body cannot wait to start consuming gluten again. It needs it.

My mind is starting to thaw after this brainwashing two weeks, so my thoughts are a bit scattered today. Here’s a list, in no particular order, of things Dan and I liked, hated, enjoyed, dreaded, etc about the last two weeks. (we made this last last night while we enjoyed our “last supper.” I admit, we drank a beer with it. We deserved it.) 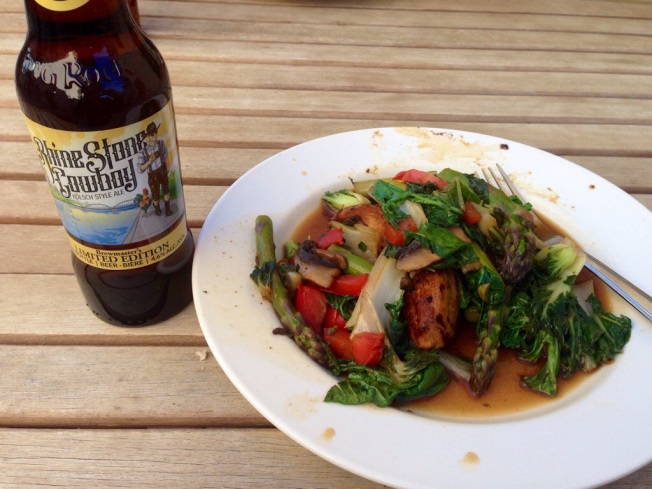 -Tamari, Hummus and veggies and Baked fish were great additions to our cooking and diet that we will include. We also will try to make more of our own dressings.
-Dan says “Olive oil is the bomb. Your omelets are so much better”
-We buy free range meat (chicken, beef, turkey) and it’s expensive, but I caved for the first time in about three years and bought some shitty chicken breasts by the package at Safeway. I immediately felt guilty.
-Hardest time for Dan was rain days when he was laying on the couch staring at the kitchen. Mine was 4:00 pm. I wanted Cheetos.
-Thought we would be gassier. We weren’t! Yay!
-Vegetarian chili was “fucking terrible”
-I Still don’t care for kale-can handle it in smoothies
-Got better with cooking and multitasking. We had to cook every damn meal in the kitchen and by us tag-teaming the meals, we pumped them out fast.
-With that in mind, this challenge did bring us together more as a couple during mealtimes and immediately after.
-Andrea became a royal bitch by 9 pm. Dan was “touchy with his feelings” but he said I got more out of line

Final number results? Well, it’s no surprise we lost weight. Dan weighed 155.6 pounds when we started. I weighed in at 131. Neither of us had an issue with our weight. But we knew with the limited calories in the diet we would lose some. Just didn’t know how much. Yesterday, Dan weighed in a final time at 147.3 pounds. I was laughing my ass off on the couch because he couldn’t believe he was under 150. A total weight loss of 8.3 pounds. I weighed in at 125.9 pounds-a weight loss of 5.1 pounds. I even put on my wedding dress last night, solely because I could zip it up again!

I am now enroute to Albuquerque for a conference, and I think I am gaining that weight back as I type this at the crappy airport bar in Great falls, Montana, while I enjoy my Bloody Mary. 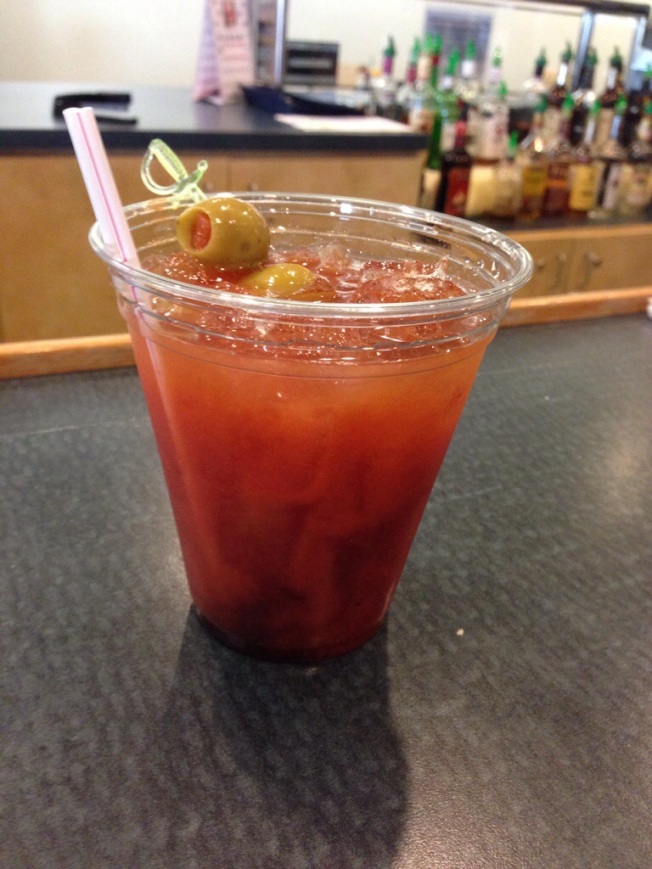 We both laugh though because as we bitched for two weeks about being hungry, Dan always finished with a sarcastic “…but we look so good!” He also said yesterday he should start taking mirror selfies stat because it’s the best he will ever look. And now I look back at a post I did last year, and me writing this post today is almost ironic and counter productive. I want everyone to still know that I stand by what I said here last year. A lot of you haven’t read this, because you didn’t read my blog until recently, so here’s what I am talking about: My thighs will always touch

And with that. I leave you this picture from my bachelorette party in the Bahamas. Yes. I am wearing a mumu. And yes, that drink is an impossibly blue color. But that cheese sauce…I could have a whole boat of that right about now. Cheers!

This is not a diet blog. This is not a food blog. I will not be telling you how YOU can lose weight and look better. I will not be preaching on how YOU must eat.  I am not trained in those areas and do not have the proper knowledge that makes me a professional in the field.  I do have my own personal experience.  So, I may reflect on past experiences that made me feel better, or worse, and why.  You can take it as food for thought.

As part of the marathon club through Runners Soul, I had the chance to try the “Bod Pod Composition System” at the Sports Science Institute in Lethbridge, Alberta.  It is basically one of the most accurate ways to measure your BMI and all that jazz.  I now am the proud owner of a printout that lists my percent fat, percent fat-free mass, fat mass in pounds, fat-free mass in pounds, body mass, body volume, body density, and my estimated resting metabolic rate.  There is no silly water submerging or caliper pinching. Just sit in the “Bod Pod” for 50 seconds, twice, and its all measured.

I was anxious in the pod, not knowing what to expect.  I really despise weighing myself, as I do not think that number accurately depicts my body.   Like most young women, body appearance and numbers have always been a stressful point. You want to look and feel perfect.  I realize now that since I workout, I gain muscle, and this weighs more than fat. When I was a more intense high school athletic participant, and hadn’t gone through any body maturity, this didn’t go through my thick head.  We had pom pon practice four days a week for three hours a day in the summer.  Track season started with captains practices in February.  Why was I never skinny?  Why did my thighs still touch?  I was solid, lean, muscle, working out more than most kids my age, but I didn’t feel ‘thin.’  I’ll admit-I tried to change it.  From November 2002-February 2003 of my senior year I went on a unhealhty mission.  I didn’t see it as a bad thing.  I just intensified my workouts, limited my food intake, and cut out foods which I had no need to ignore.  I got addicted.  I saw results.  But i put my body and my well-being at danger.  In late January I distinctly remember feeling so weak at the WACPC State Pom championships.  I had lost weight, but in the process lost that muscle which kept me strong and going.  Thankfully, people close to me intervened and got me on track.

I realized that if I tried to change and alter my body type, it would have to be under extreme and unhealthy measures.  I have always lead a healthy active lifestyle.  I generally eat healthy, always eating breakfast to start off my day.  But…I’m 5’3″.  I have a mixture of my mom and dad’s build. There’s no way I would ever be a stick.  I have come to accept that.  Throughout the years, the number on the scale sometimes still gets me down.  But I remember back to my 18-year-old self at my lowest adult weight.  That number can mean so many things, and at that point it meant weakness.

What does my typical week day look like, food consumption wise?  Well, I have a cup or two of coffee and either a bowl of oatmeal or a cereal like Cheerios.  I pack a lunch for work, and it usually includes a sandwich with free-range ham, cheese, onions, and lettuce.  Oh, and hot sauce.  I LOVE hot sauce.  I also have fruit and veggies.  I drink as much water as possible during the school day, but not too much, since the staff bathroom is inconveniently located what feels like MILES away from my classroom down in skid row.  I’ll snack on triscuits or tostitos after school (tortilla chips are my downfall).  Dinner is something usually homemade with free-range beef, a starch and veggies.  I have a beer or two or a glass of wine each night.  I feel like I eat healthy, but allow vices in moderation.  And this is important.  I recognize the effects too much cheese has on your body.  It’s bad for me!!!!  But, I’m from Wisconsin and if I was lactose intolerant, I might cry.  I am trying to cut back-cheese is my drug.  But, will I ever cut it out completely?  NO.  Moderation….mod-er-a-tion.  Craft beers and wine tasting are a pastime and hobby for my husband and I.  Yes, my body would overall be healthier if I cut these out completely.  That dreaded weight number would possibly decrease.  But it’s something we enjoy.  With proper moderation and exercise, my body can still be healthy while enjoying these things.

Back to the Bod Pod.  What did it say?  I’ll admit the key details all right here:

Do I feel 140?  No.  Do I feel like I look 140?  I don’t think so.  I was surprised this was the result.  I’ll admit that this ‘weight number’ hit me like a rock.  It always does.  But, I took a step back and breathed.  This isn’t the end of the world.  I am older than I was when I was 18 (duh).  My body has changed.  And all my clothes still fit.  If I tried to make myself any less than 140 it would have to be under extreme measures.  And is this worth it?  Hell no.  As long as I keep running and doing what I do in the kitchen, and even enjoy my pints of beer, I have accepted that it’s OK if my thighs touch.

Lead an active, healthy lifestyle and be proud of who YOU are.