The weather was perfect for running on race morning!  Minimal icy spots on the paved course, and a nice brisk winter air.  I was one of the only fools wearing shorts, but I did have layered long sleeve shirts and my tall compression socks, so really there was not much skin being hit with the elements.  I made sure to arrive early enough to allow for a proper warmup.  My husband came to cheer me on (I sort of forced him because of my nerves).  Race began at 9 am, with the 10km and 5km runners heading out together.

For the first loop, all the runners were together.  This allowed us to be near other runners, but you have to be careful….those 5km runners are potentially going at a faster pace than you would for a 10km (I mean, they should be) so I didn’t want to get wrapped up with trying to stay ahead of people near me….they may be doing the 5km!  I was able to check race bibs, as the different colours signified which event you were in.  I was able to determine by mile 1.5 I was the 3rd female in the 10km.  It was around mile 2 and 3 that my mind started playing games with me, and I didn’t know if I could hold pace.  Was I going to fall apart?

Photo Credit to Shay, who was volunteering on the course! 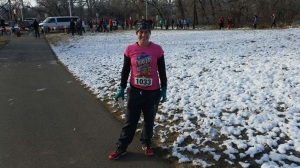 Post race-got my sweatpants on and a water, so I’m good!

Takeaway on my splits….I ran my first mile like I was going to run a sub 43 minute 10km.  I want to get to that point again, really I do!  But that obviously hurt me in the miles after.  What would have been ideal is if I could have hit consistent 7:30 splits, but I can’t go back and change that.  I am happy, however, that I was able to reach my goal of being faster than 48 minutes.  I also was able to have a faster pace per mile at this event than I did back a month prior at the Bare Bones 9km.  A farther distance and a faster pace; I’ll take that!  My foot felt strong during the race, and I didn’t have too much pain afterward.  My cardio (and confidence) is what needs to come back.  And it will in time.  I was definitely feeling the ‘race pains’ then next day, but I couldn’t lay around….I had a 15 mile training run for the Goofy Challenge to do, and honestly….it went better than expected!  Countdown to Goofy is beginning NOW! 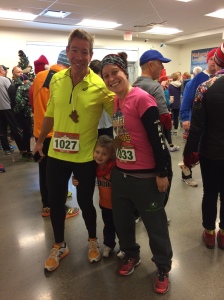 After awards with Bob and his daughter Abby

…But nothing to do with politics!

It’s been a couple weeks since my last post, which was about my last race.  In those weeks since, I have been trying to stay away from Twitter, Facebook and the likes….because it always just gets me in trouble.  I was really good up until the night of the election and then I just ugly cried into my beer.  Then I pounded another beer.  And then I believe I made some Facebook comments angrily…..mature.

I had been avoiding Twitter even more, because I was sick of seeing anything election related leading up to the election.  For about the last month I honestly did not tweet as much as I used to.  I get too aggravated seeing things that upset me at my core, and I can’t deal with my anger well.  So, I just cut Twitter off pretty much.

I know I said this wasn’t a post about politics.  It isn’t.  Trust me.  Because I’m done talking about it.  What I said above was necessary, though, because in my absence of Twitter I didn’t connect with the #runchat community as much.  I am not necessarily a huge contributor to the community, but a lot of the people I follow on Twitter are through Runchat.  Many of these people I have never met.  I joined Twitter initially to help spread the word about this blog.  To connect with other runners.  To read more about running.  To find out more information about RunDisney events.  To commiserate with others when I failed to qualify for Boston.  Twice.  To celebrate with others when I finally did qualify!  To be able to be part of #BQChat, and to spread the joy and recount my trip to the 120th Boston Marathon.  I joined Twitter for running.  Not for politics.  It’s just a shame that it had to overtake my Twitter feed for the past bit that it bothered me so much that I needed to just not open it for some time.

I love talking about running.  About other people and their running experiences.  About my own experiences.  About goals, plans, dreams.  But most of the time, I like to just run alone.  I know a lot of people need a group or a running partner when they go on a long run, but I still yearn for those long runs when I am by myself.  Today, I ran 14 miles in the Lethbridge River Bottom.  It is November 13th.  And it is ridiculously gorgeous out.  I wore shorts and a short-sleeved shirt.  And sunglasses.  I headed out at roughly 10 am.  Down to the river valley I went.  I looped through the paved paths of Indian Battle Park, down past the Helen Schuler Nature Centre, to the Elizabeth Hall Wetlands, back past the Baroness Picnic Shelter, over to Whoop-Up Drive, onto the shale and dirt filled path that takes one right underneath the iconic high-level bridge….I took breaks during this run.  I took some pictures.  I took my time.  I eventually made my way back home and took my shoes off to find new blisters on my left foot.  My right foot, the surgery foot, felt good though.  It is worth noting, though, that during this solo run I never felt alone.  I ran past tons of couples, friends, families….all out enjoying the beautiful November Sunday.  Some people I passed two times.  I ran into other runners, who as we crossed paths we gave the little head nod to acknowledge the other.  I had my mind entwined in all the crazy things I have been thinking about the past while.  And when I returned from my run, while those crazy things weren’t gone….they weren’t driving me absolutely mad. 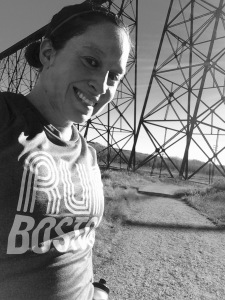 These things were all released from the simple act of going on a run.

These things were all gained from the simple act of going on a run.

I know running can’t solve all the worlds’ problems, but I know it helps a lot of us deal with them a little bit better.