Back in January, I wrote and shared the following post:

The Sourest of Lemons

If you didn’t see it originally, you can read through it.  The general gist of it is talking about the experience I had with my miscarriage in January.  My husband and I found out I had experienced an Anembryonic Pregnancy (blighted ovum).  We found out when I was thought to be around 13 weeks.  I had a D&C surgery a few days after, and really had no clue what the next months ahead would be like.  Was getting pregnant going to be easy, hard, or somewhere in between?  Would this just happen again?

Beginning of March, I take two positive pregnancy tests.  Call my OB/GYN because I was concerned that perhaps these were false positives; hormones still floating around in my body from the first pregnancy perhaps?  I had three blood tests to see if the HCG hormone levels were rising properly.  They were.  I had an ultrasound at what was guessed to be 5.5 weeks.  Couldn’t see much, but the tech did capture a video clip that showed a little blip of some kind.  Came back the following week and the tech could confirm that YES, an embryo and fetal pole had developed.  We saw a heart beat.  This was all new to us, since we never saw this the first pregnancy. 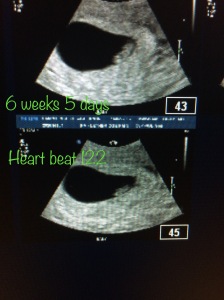 I was an anxious mess the following weeks, as we had to wait until after Easter holidays for the First Trimester Screen test.  This was the test where we found out the sad news in January.  Even though we saw the heartbeat at 6.5 weeks, and even though I was gaining some weight and having other pregnancy symptoms…I still didn’t believe this was real.  We drove to Calgary on April 24th for the appointment.  Once the ultrasound wand hit my belly BOOM-Baby.  Baby moving around.  Stretching out.  Fist pumping.  Yawning.  There was a baby! 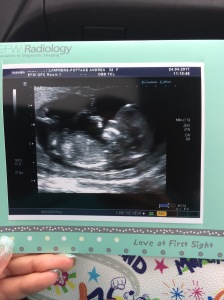 I measured at 13 weeks 5 days, and baby was about 6.4 cm long.  While some of our close family and friends knew what was happening (and various others who I couldn’t keep my mouth shut around) we had not made it public knowledge yet.  While I wanted to go home and announce it that very night, we waited until the following day.

This is a day that since April 25th, 2004, I have dreaded.  It was the day my dad passed away.  While in the past few years I have been able to handle the exact day better, the days leading up to it and around it are always tough.  There’s usually a breakdown of some kind.  It has generally been a sad day since 2004.

I know my dad has been watching over me all these years.  There have been lots of moments where he’s been a proud, beaming father.  There have been other moments where I can guarantee he was swearing at me for being a f&$king idiot.  I know that on this day, April 25th, 2017, he was excited and sharing it with everyone—proud that his baby would be having a baby. 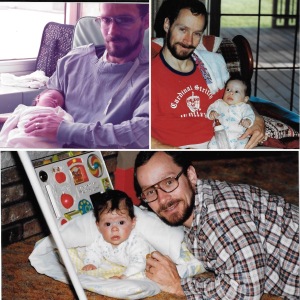 I think about you every day dad.  I am so lucky to have had a dad like you.

On Saturday, April 8th, my husband and I participated in Lethbridge’s oldest running event-The 10 Mile Road Race.  This event was celebrating it’s 44th birthday this year!  I have ran in the 10 mile race 3 different times, with my best finish being last year with a 1:12.59-good enough for 2nd female overall and I walked away with some spending cash for Boston!  My husband has only done the 10 mile race one other time, and that was in 2015 when he ran with no training and finished in 1:46.53.  Let’s just say this year was quite a bit different than those two times! 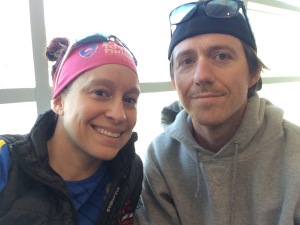 First off, I ran in the 4 mile race for the first time.  It would just have the gentle rolling of Scenic Drive and no major hills.  Dan would be doing the 10 mile again, but he has been training.  He has been participating in the Tuesday night Runners Soul Racing Team which does speed workouts, and he has been running two other days during the week.  It doesn’t sound like much, but for a ‘non-runner’ it’s pretty good! 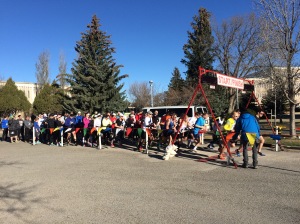 Start of the 10 Mile

It was crazy windy the morning of the race.  Warm, but windy!  Dan started the 10 mile at 9 am, and the 4 mile followed at 9:20 am.  Dan and I talked about a pace goal for himself, and based on his most recent 8 mile training run we figured he could do an 8 minute mile pace.  I was hoping to run under 30 minutes in the 4 mile.

The 4 mile race goes out and back on Scenic Drive.  It is great to be able to see those ahead of you turn around and head back.  You really get a good idea of where you stand in the pack.  I was able to start at 2nd place female and hold on to this position the whole race.  The wind was really getting me at open spots, especially in front of Sugar Bowl.  There are a lot of younger kids out there doing this race too (4 miles is pretty doable!) so it was fun to talk to the kids as they were running and cheer them on.  I was aware of how much was left on the course, so I made sure to tell the little guy next to me that there was only 400 metres left and he should just push it!  Off he went!  I finished with a chip time of 30:57; a bit off my goal of sub 30, but good enough to place 2/102 female runners, 1/26 in age group of 30-39 and 13/155 overall. 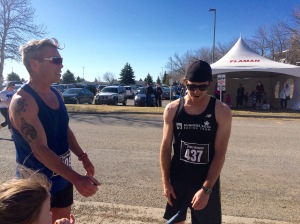 We stuck around for the 4 mile awards, where I received a silver medal for my 2nd place overall, a $75 gift certificate to Runners Soul (which I already spent on leggings) and then a gold age group medal.  It was great to see current and former students I have coached there participating, and many of them also receiving age group awards!  This is a great local race and the two distances (plus the new 1 mile kids race!) offers something for everyone.  Can’t wait for the 45th next year! 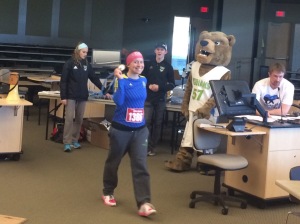 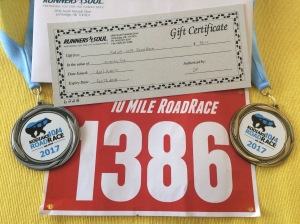