I don’t even know where to begin! So I’ll start with a quote regarding visitor information directly from the race webpage:

“Located off the north west coast of B.C, Haida Gwaii is as far west as you can go in Canada. It is the home and traditional territory of the Haida. It is one of Canada’s undiscovered treasures.” 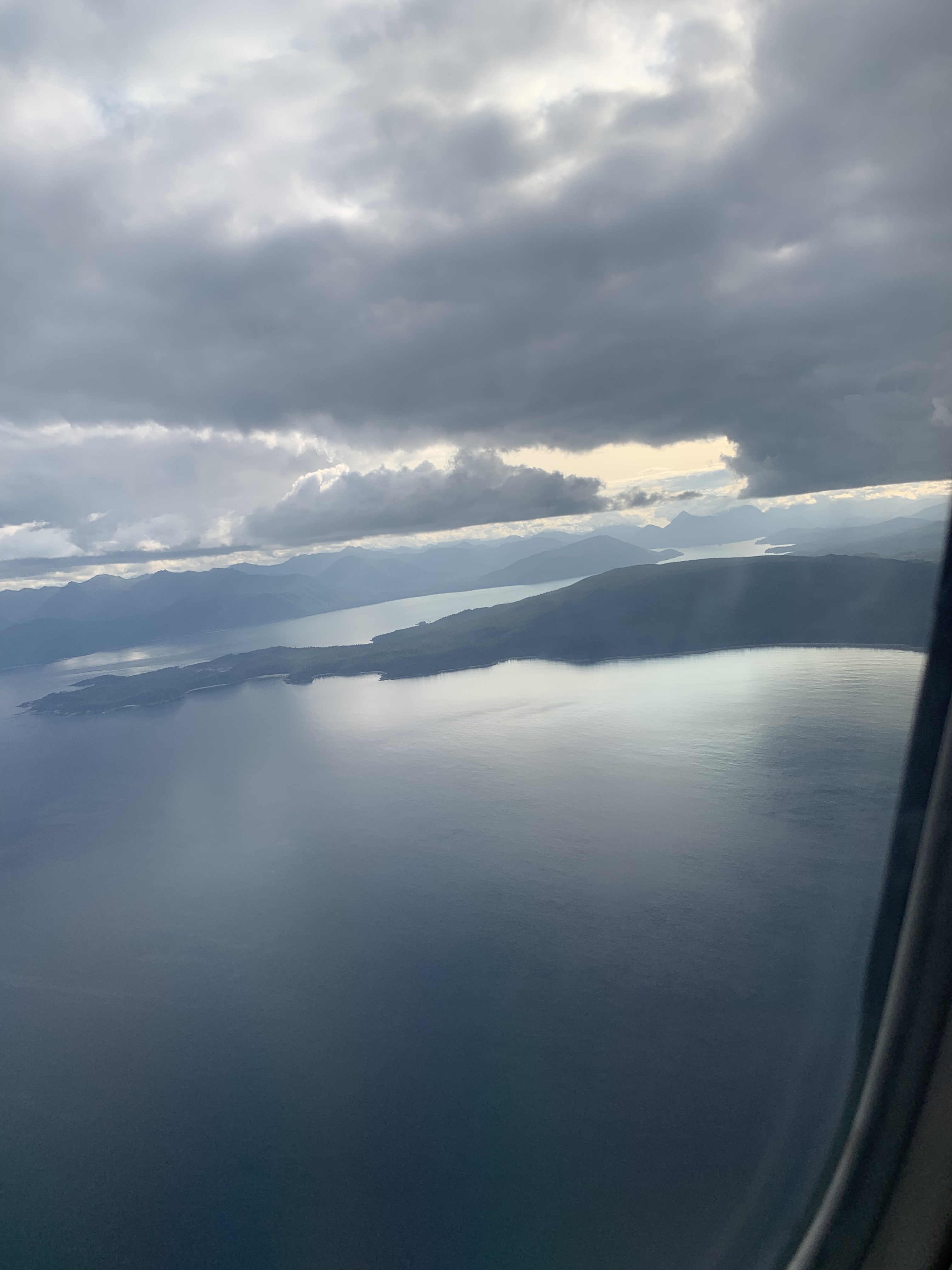 This was a family vacation that we planned around a race. It was able to happen in part that our friends, David & Heidi, live out in Haida Gwaii. We booked the three flights, shuttle and ferry and went out on an adventure! By using our AirMiles (and the fact Andy could fly for free) it cost us $100 per adult ticket for all three flights, return! Flying from Alberta to British Columbia is the lowest AirMiles flight redemption for province to province, so this was a steal considering how much all these little flight segments would have cost.

Riding the moving sidewalk in Vancouver 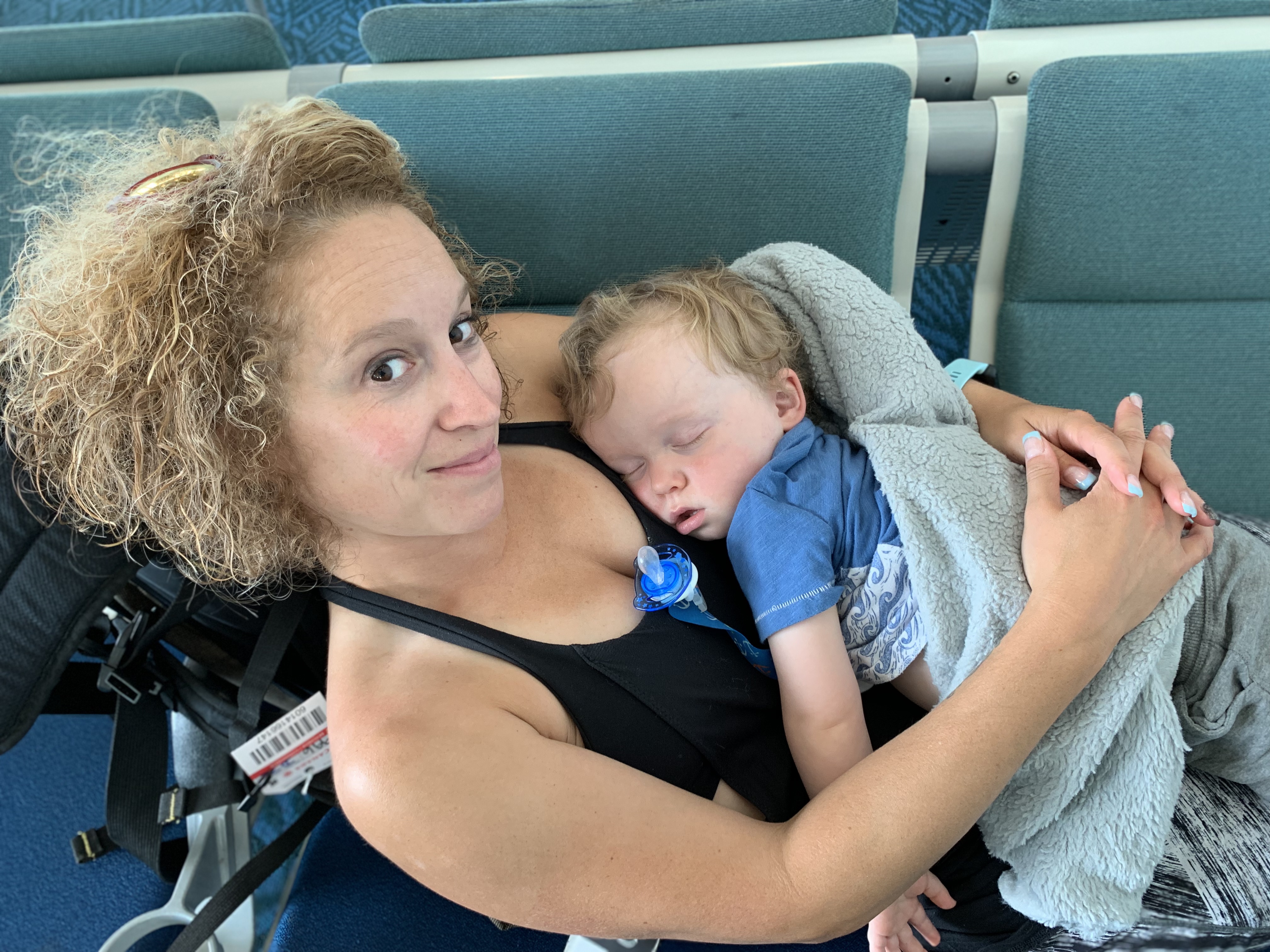 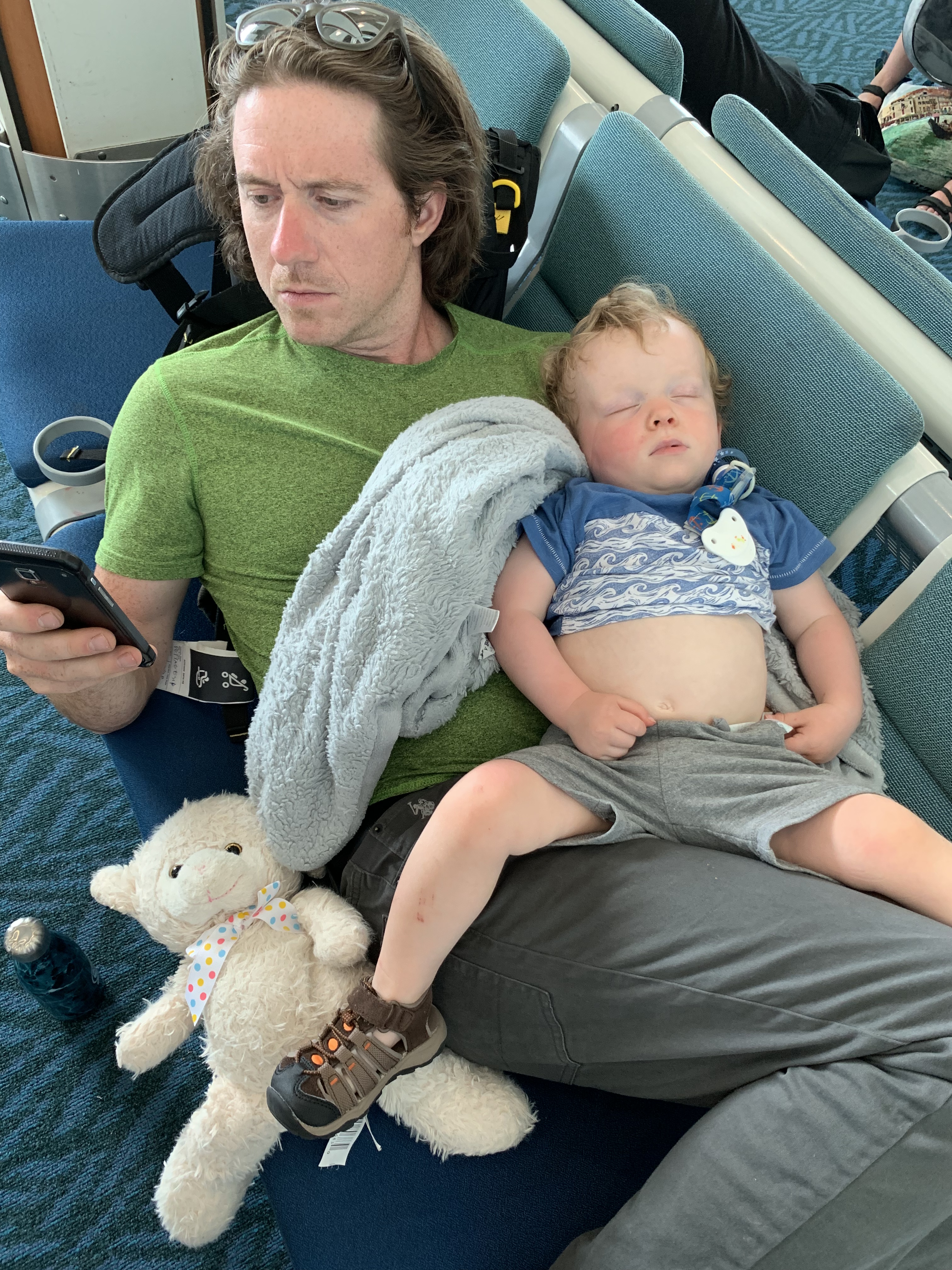 Even slept through a parent transfer!

We arrived in Haida Gwaii on the Thursday. This allowed us to get settled in at our friends’ place and tour a bit the next morning. Flights were delayed out of Vancouver, and we ended up leaving 3 hours late to the island. Andy was a champ throughout this all (more so, I was getting super anxious and I think my husband was getting sick of airports). I was very worried we would be stuck in Sandspit (not where Dave & Heidi live) because technically, the last ferry would have already left. However, BC Ferries ran one more ferry from Moresby Island to Graham Island solely because of the inbound flight coming in. Phew! 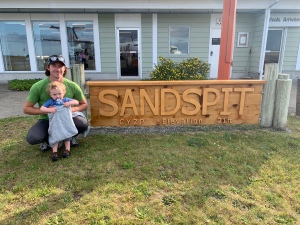 We made it to Sandspit! 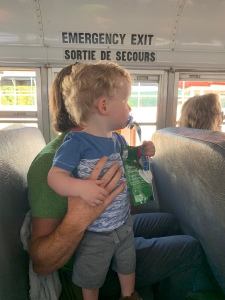 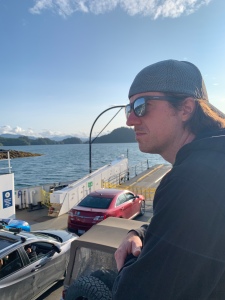 Not loving it on the ferry!

On Friday morning, Dave and Heidi decided to show us how life is out there and we went crabbing. It was a lot of fun. We drove up to Miller Creek (a spot on the race course), parked on the side of the road, then hiked into the beach.(YES we bought our license to crab, which was a whopping $5 per person. You could catch up to six crabs a day per person on that…) We ended up catching a Dungeness crab and a red crab (I forget the name of this kind). The Dungeness was huge! It fed us all lunch that afternoon. 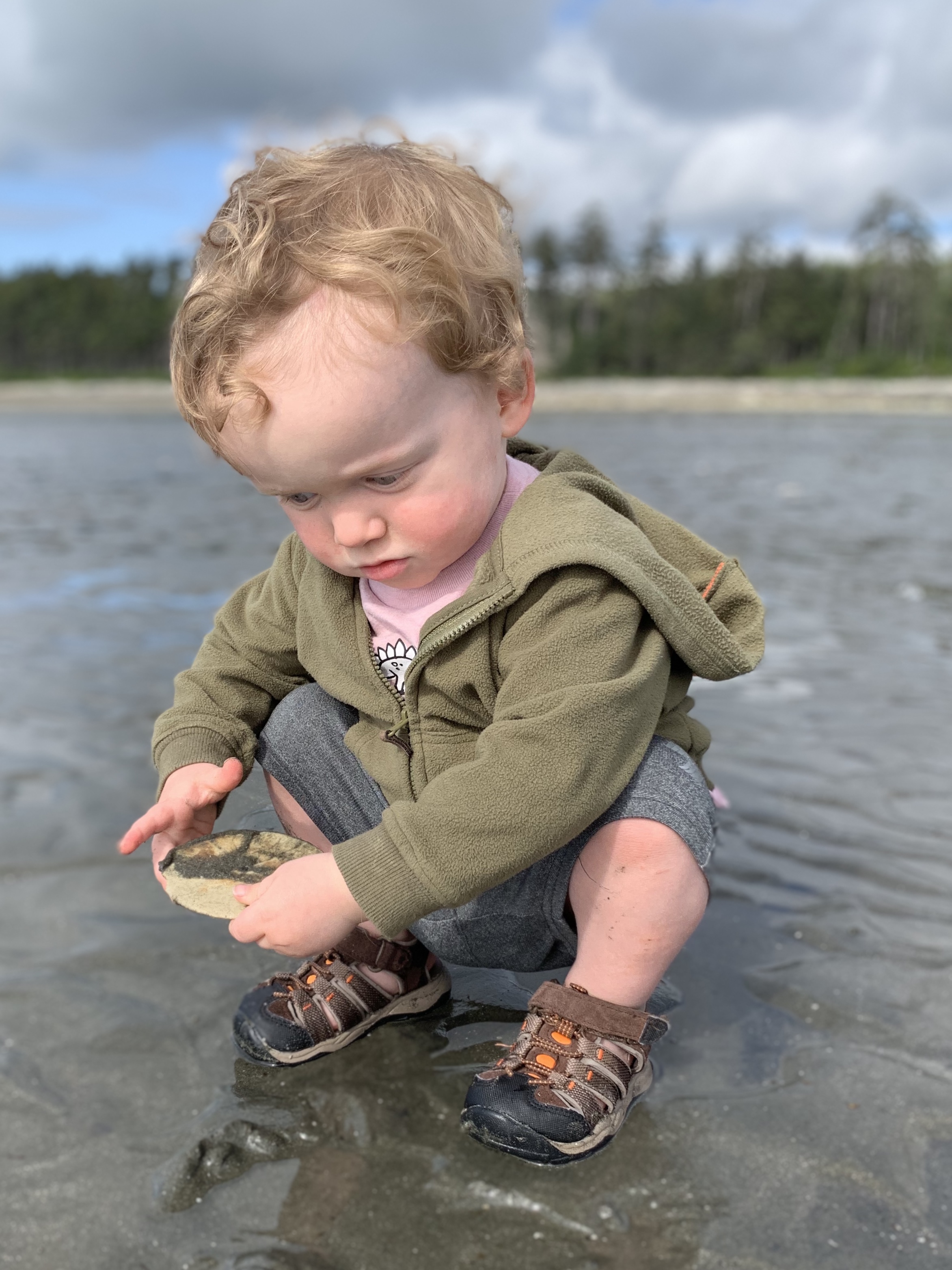 Probably my favourite picture from the trip!  Some serious sand-scooping with a sand dollar is happening. 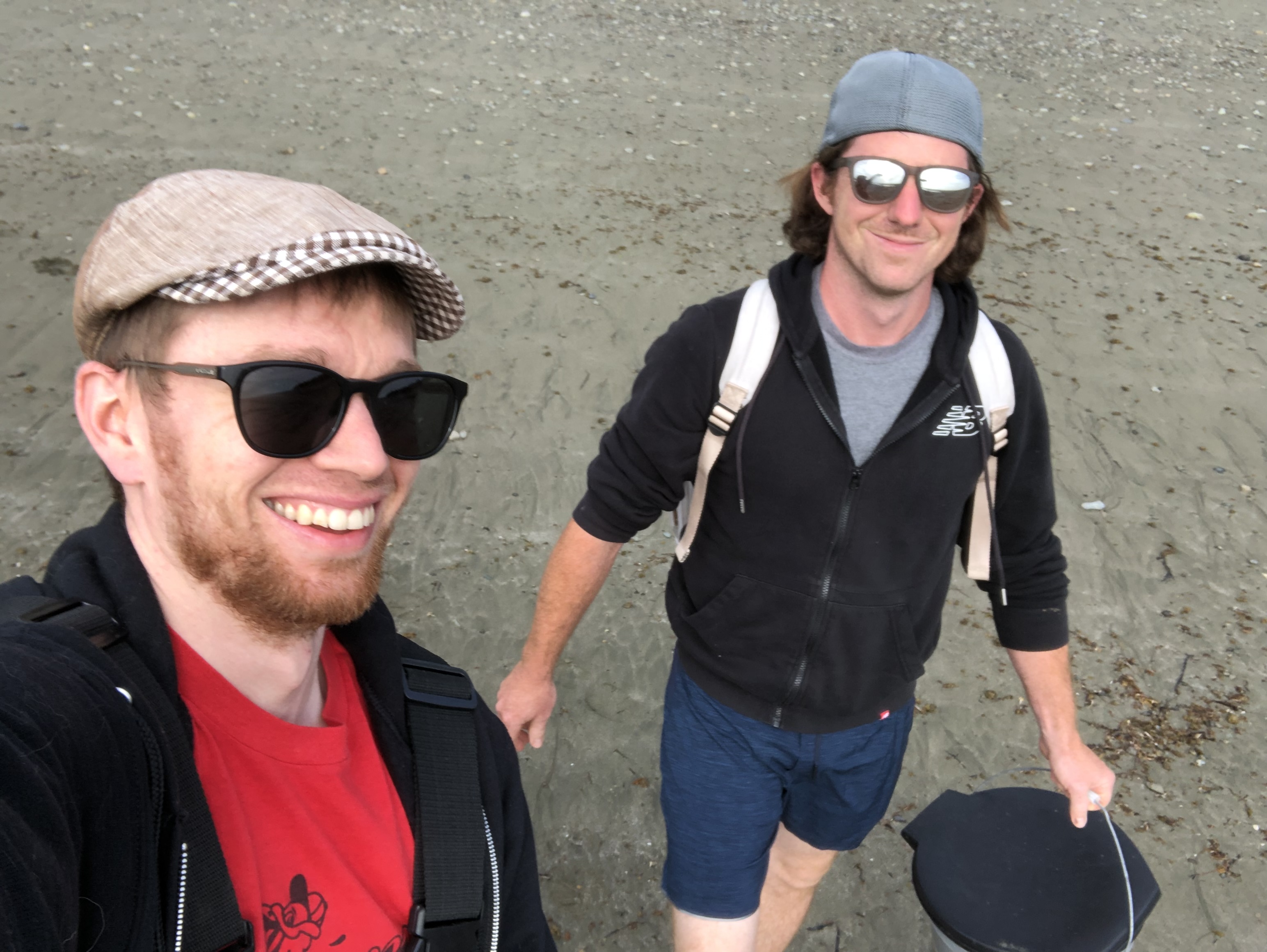 The crew (minus Dave since he was taking the picture)

Later that day, we went to the Skidegate to pick up our race packages, which was located at the Kaay Centre. FUN FACT: This was an official AMAZING RACE CANADA location! Even though it was a small package pickup, you could walk a little bit inside the centre and out on the grounds to admire the totems, canoes, and the view. I was happy with the shirts, as they were the Authentic T-Shirt Company, and from my experience their shirts are not of the best quality….and often, they are only one “gender size”. Since I got a women’s small, it actually fits my proportionals correctly and is not a lost cause. The logo and the shirt design mesh well together and both my husband and I really like the colour! 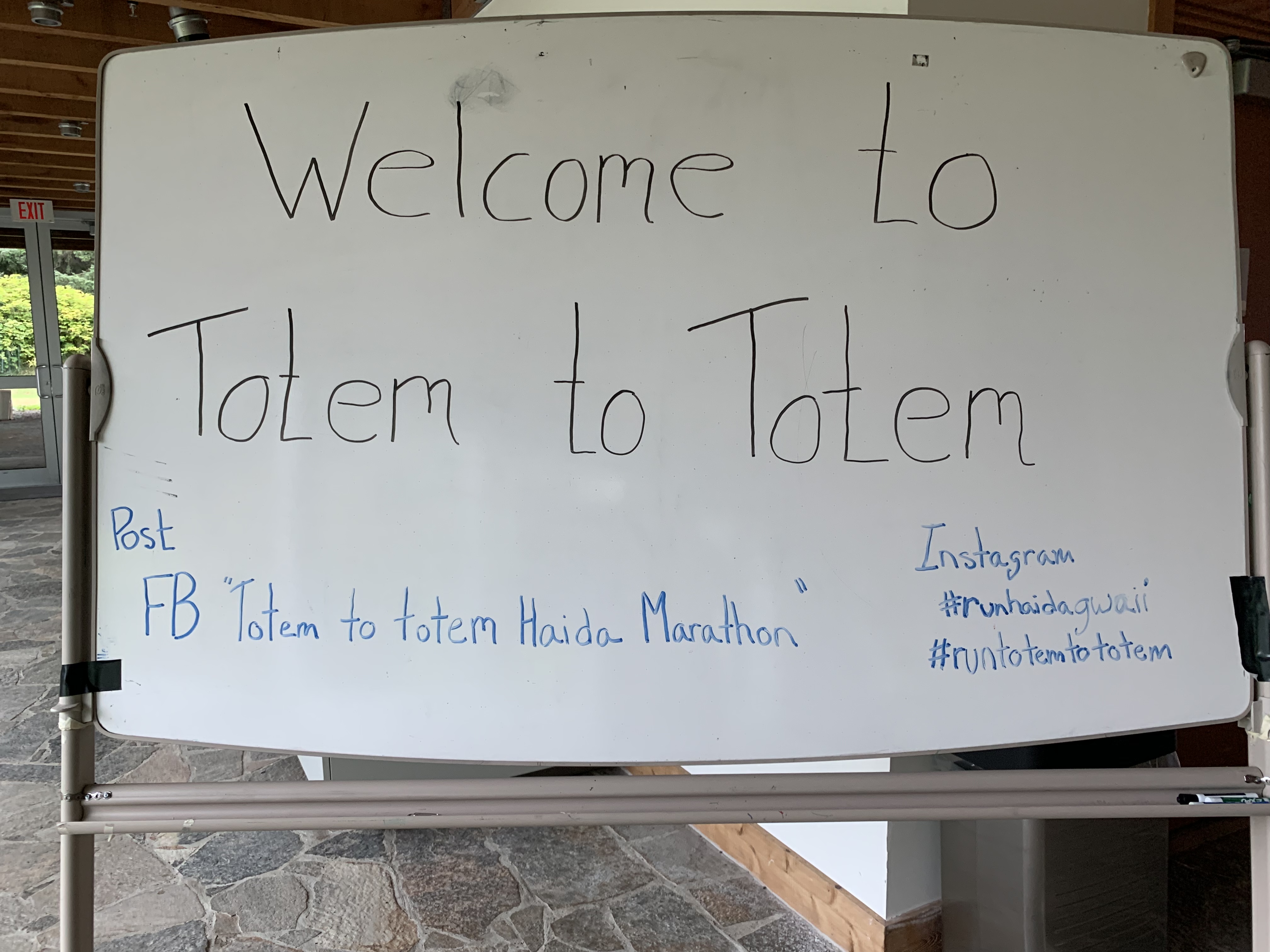 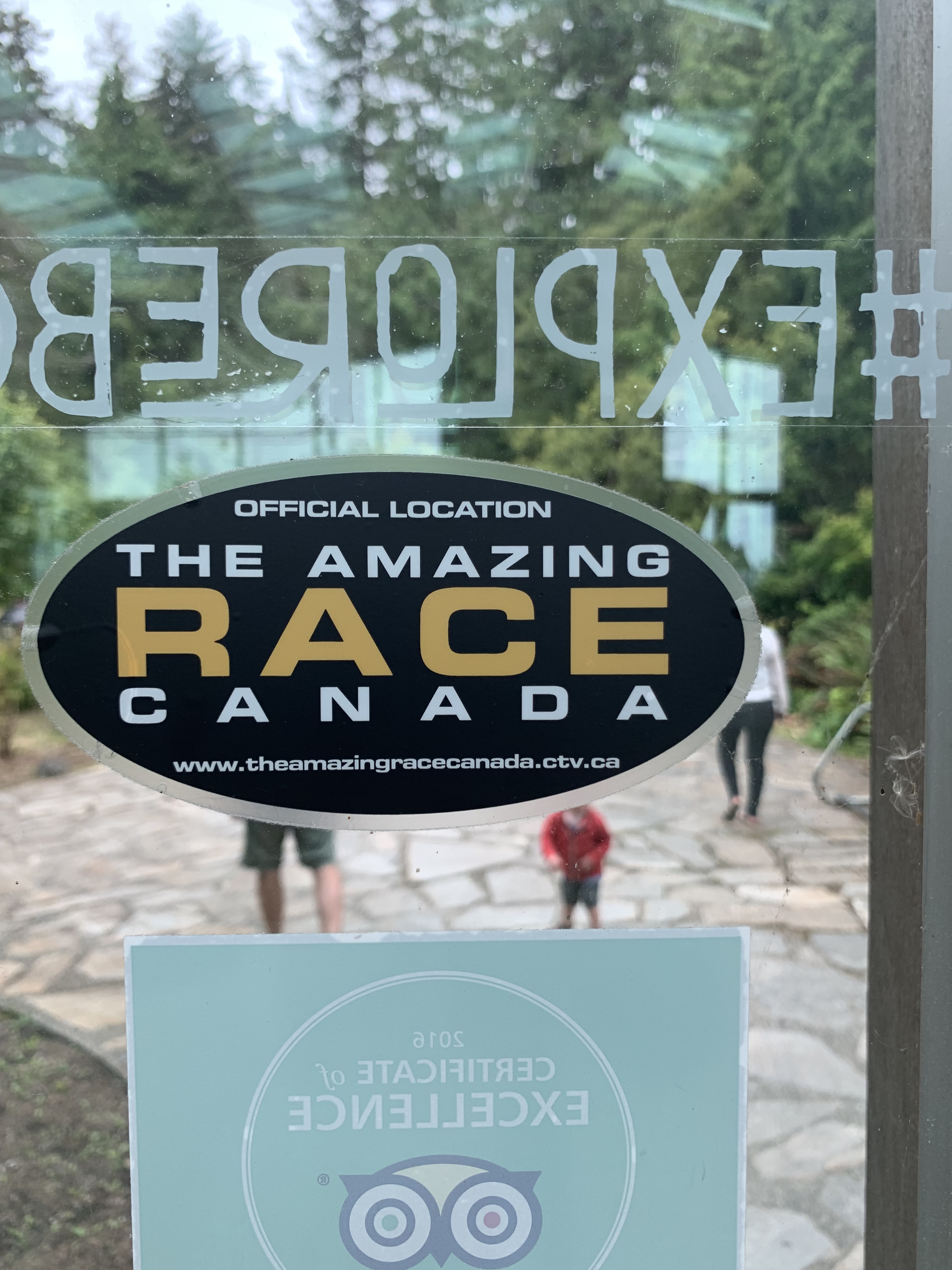 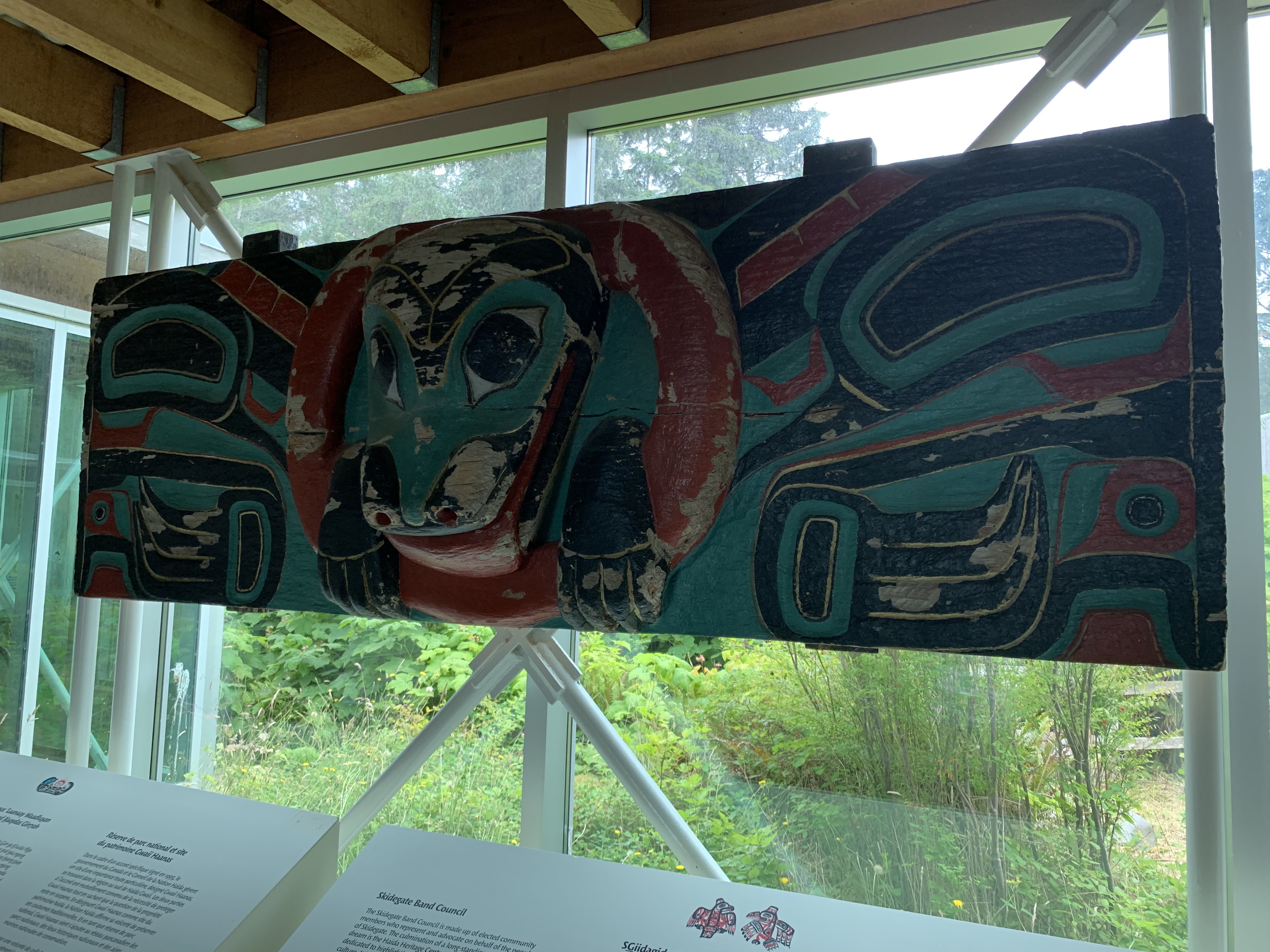 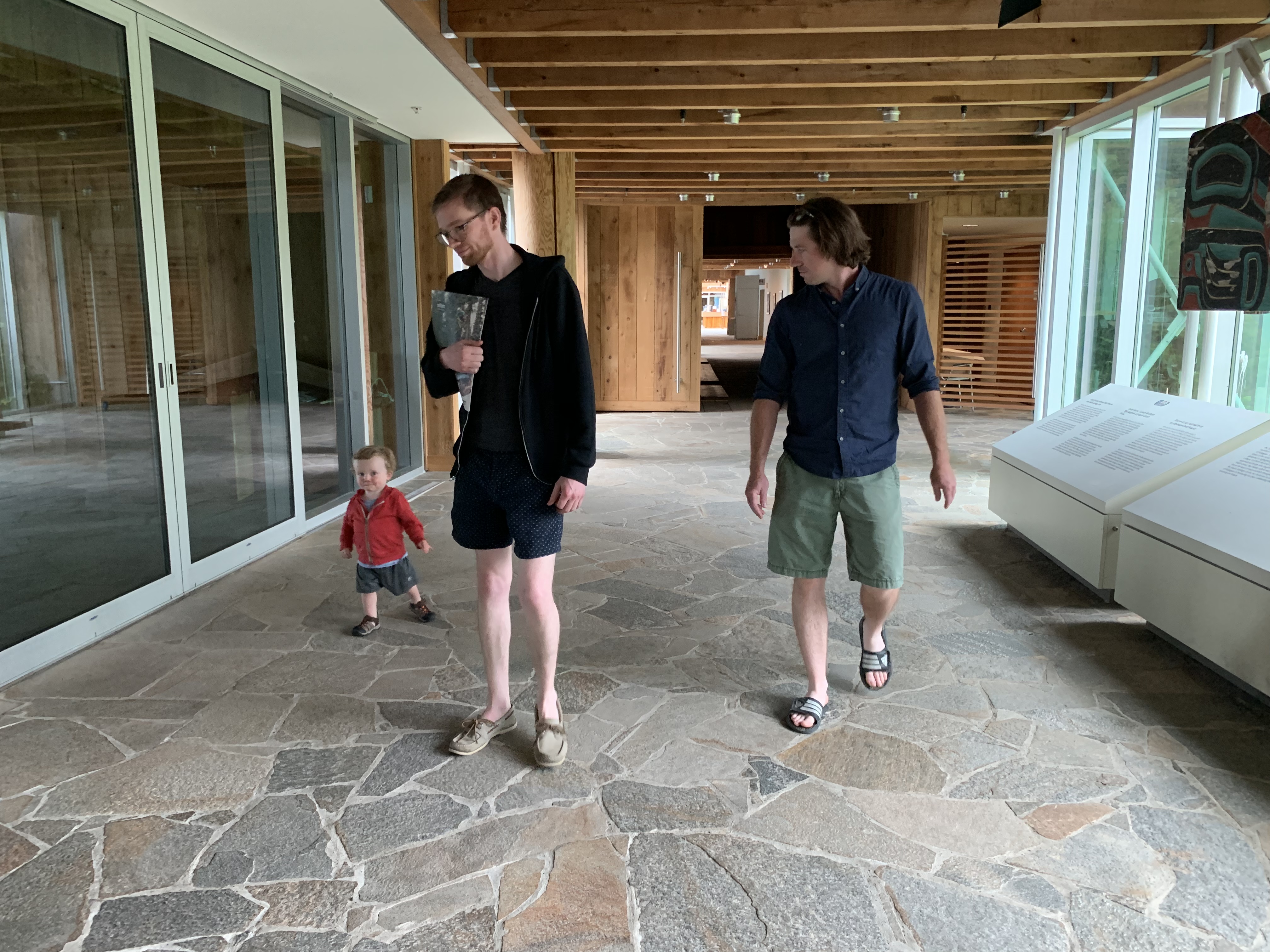 Race started at 8 am. The drive from Dave & Heidi’s place in Queen Charlotte was about 15 minutes. If you are a tourist doing the race, there are quite a few B&B options right in Queen Charlotte too! And I am sure people have Air BnB. There are just none of your typical “Holiday Inn”stuff. And that is fine! We loved the comforts offered here! Race parking was so easy, everyone was so nice. The full and half marathon would be starting at 8, with the 10km following at 8:15. 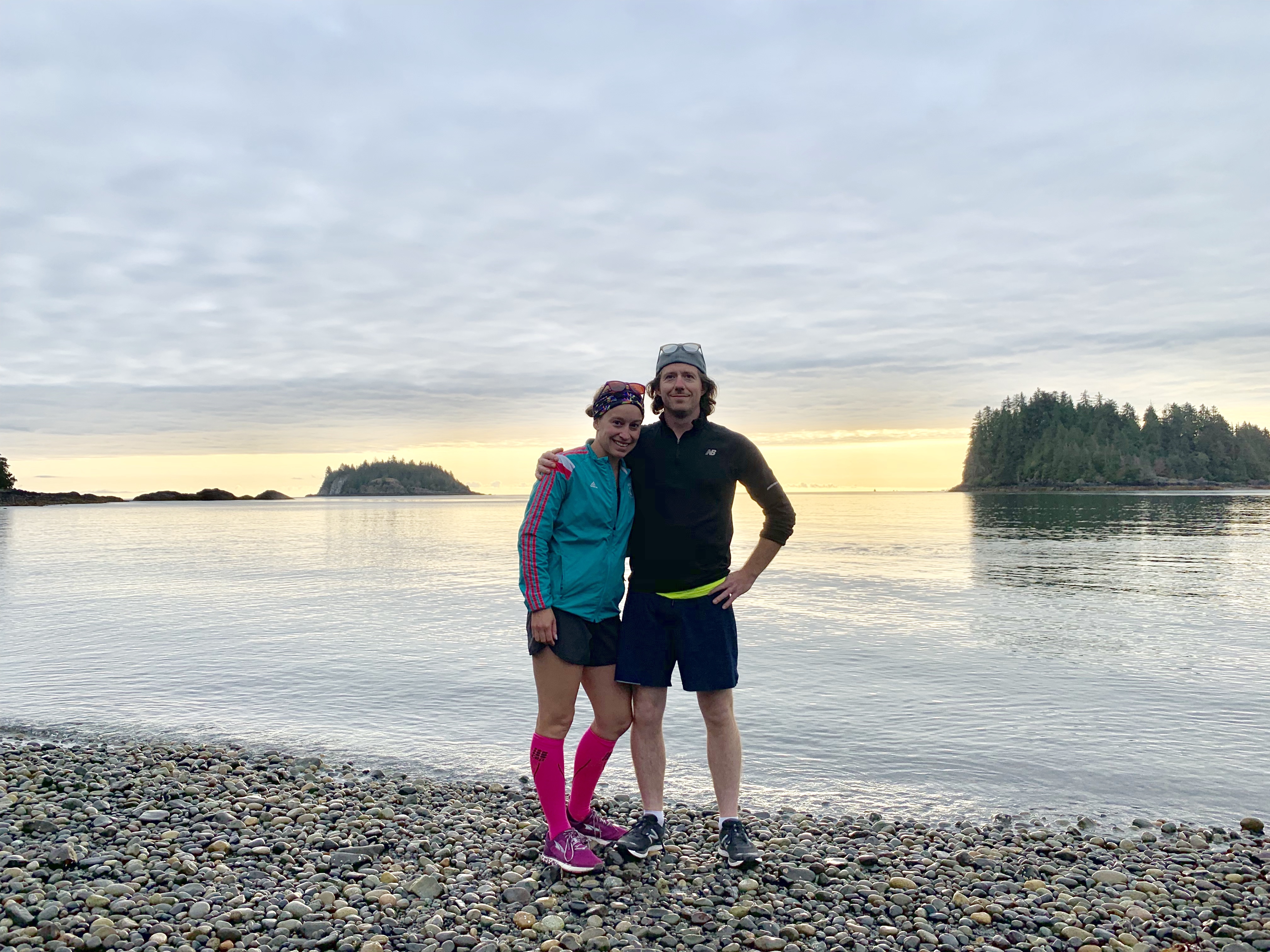 Down on the beach at the Kaay Centre

Getting ready to start

If this race interests you for a full marathon, the first thing I need to make clear is that it is an extremely small field. In the past years of running in general, more and more people take part in 10km and half marathons….full marathons still seem to be a little bit scarier of a task. I knew it would be a small field based on looking at past results. When you look at the 2019 final results, there were 21 total runners in the full marathon, 47 half marathon runners, and 128 runners in the 10km. So, coming from “a city” this is VERY SMALL. THAT IS NOT A BAD THING! For lots of distances, this is great. But I was well aware of how the marathon field would be and how alone I would potentially feel on the course.

The course is “out-and-back” style, where the half marathoners turn around at Dead Tree Point water station. The marathoners would then continue on to St. Mary Spring, then head back to Skidegate. The whole time you are running, you are on the “highway.” It’s the only road there, with one lane each way. They have tall cones on the edge for runners to stay inside of. When cars occasionally pass, most honk and wave. There are water stations approximately every 5km. If you really get frustrated with your race just look to the side and you are literally running alongside the ocean. You’ll forget your worries!

I won’t recap mile by mile, I’ll just post a Garmin screenshot and it’ll tell you how it went. In summary: Started off strong feeling I could get that 3:30.00 but by 7 miles I was so mentally frustrated and alone (since the half marathoners had turned around) I was just in a mood. Lo and behold Meaghan and Benjy from Victoria, BC, come up to me. THANK GOD. They had ran with Dan for a few miles before the marathoners kept going, and Dan must have described me well enough to them that they knew I was his wife. At that point I thought another female runner was ahead of me. Turns out, I was the lead and Meaghan would ultimately win for the women. But without them showing up, and running with me to the turnaround point, I may have just dove into the brush and then found my way to the sand to start crabbing again because I was crabby….

Running with others is fantastic. We met up around mile 7 or 8. We all ran together until the turnaround. Meaghan and Benjy went ahead. I eventually passed Benjy. And then seeing the areas I already had once passed motivated me to keep moving and pick it up. I’m going to say GIRL POWER here because after Meaghan passed me, no other women passed me but I caught up to and passed 3 guys! It felt good! Since I was feeling the pain of the mileage (I hadn’t done a training run longer than 15 miles this season….oops) and I couldn’t see the third place female behind me, I made sure to take my time at the aid stations. They were well stocked, but I will say the first one we hit on our way out from the start was weird because they only have bottled water but no cups or jugs to fill from….so I carried a bottle of water for a while as a shower device! 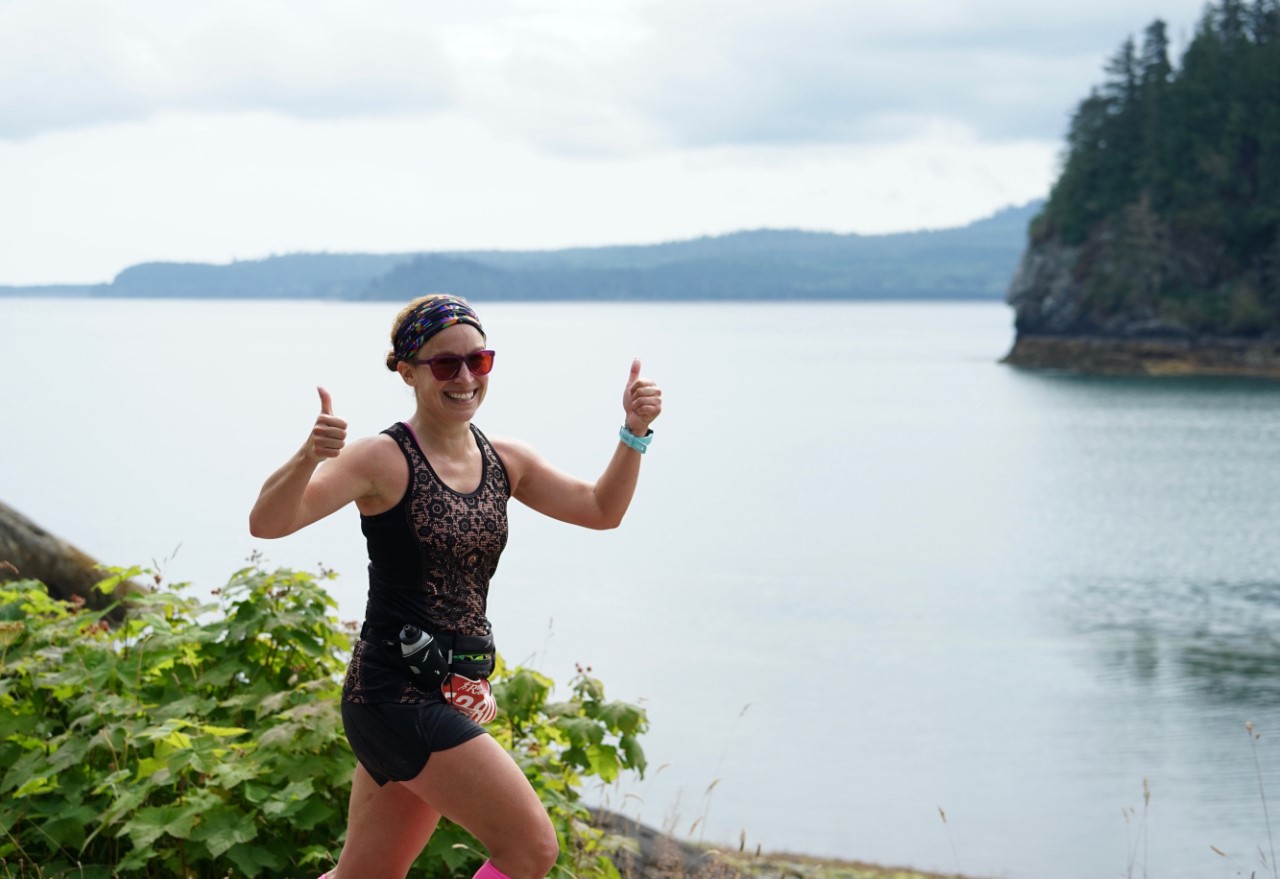 Finish line area was super welcoming and all the runners, spectators and volunteers were genuinely happy when someone came across. We received a beautiful finishers’ medal, the design was new this year by local Haida artist Robert Davidson. Andy was waiting with David & Heidi when both Dan and then I crossed the finish line. They caught video of Dan coming in with Andy clapping, and then when I crossed in I ran and gave him a big hug. 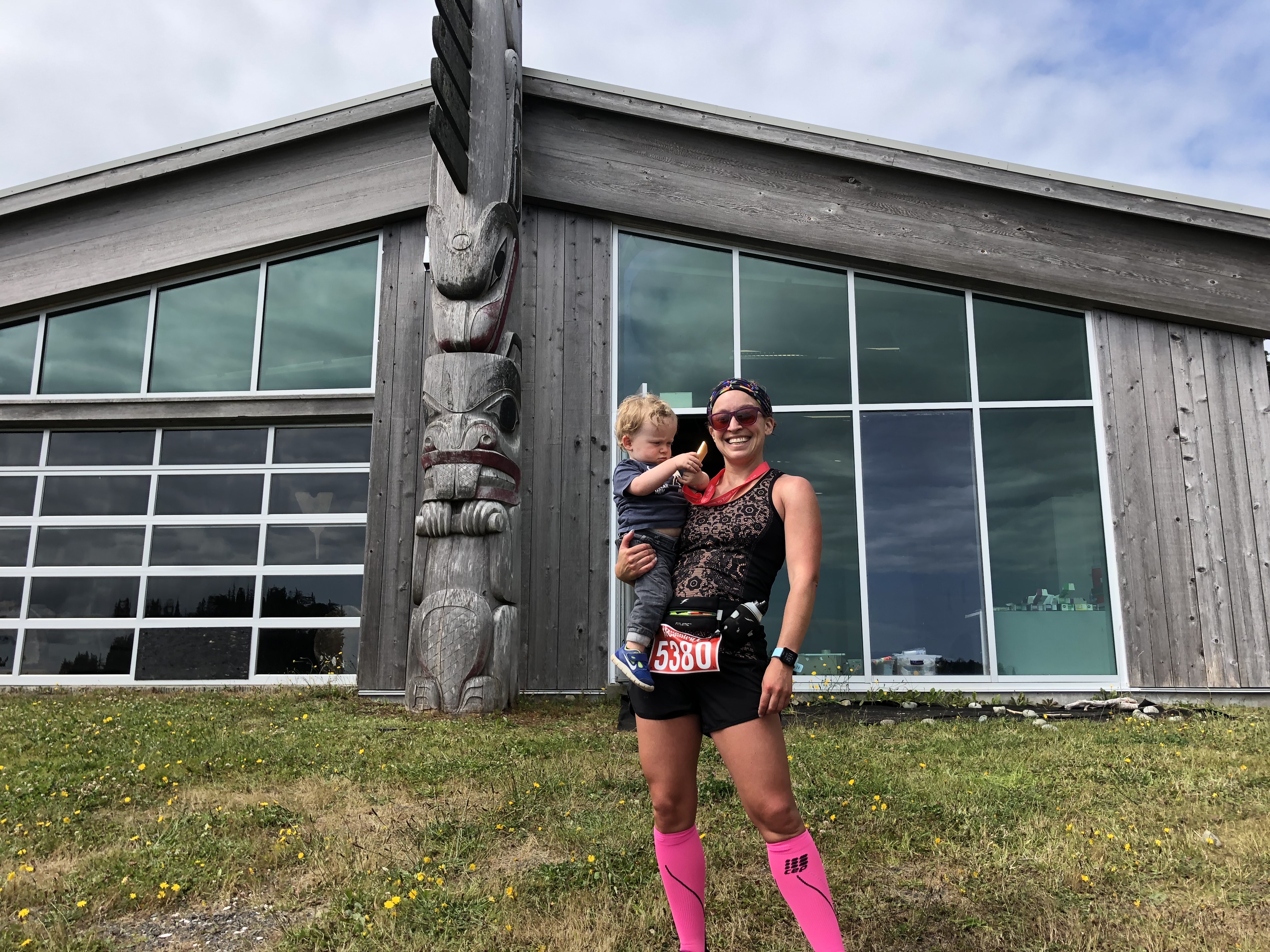 I finished the race in a time of 3:42.35, which is my third fastest full marathon.  This was my 15th marathon.

As a mother runner, coming across the finish line and giving that little monster a big huge is an amazing feeling!

We hung around for a bit, and then we were informed that awards wouldn’t happen until the last finishers came in, so around 2 pm. At standard races,this would not occur. But since this is such a small, community and cultural event, I understand the importance of waiting for everyone to be in attendance to receive their awards. We went back and showered, Andy took a snooze, and we came back at 2 pm. The awards were presented by the totems in behind the Kaay Centre overlooking the water. 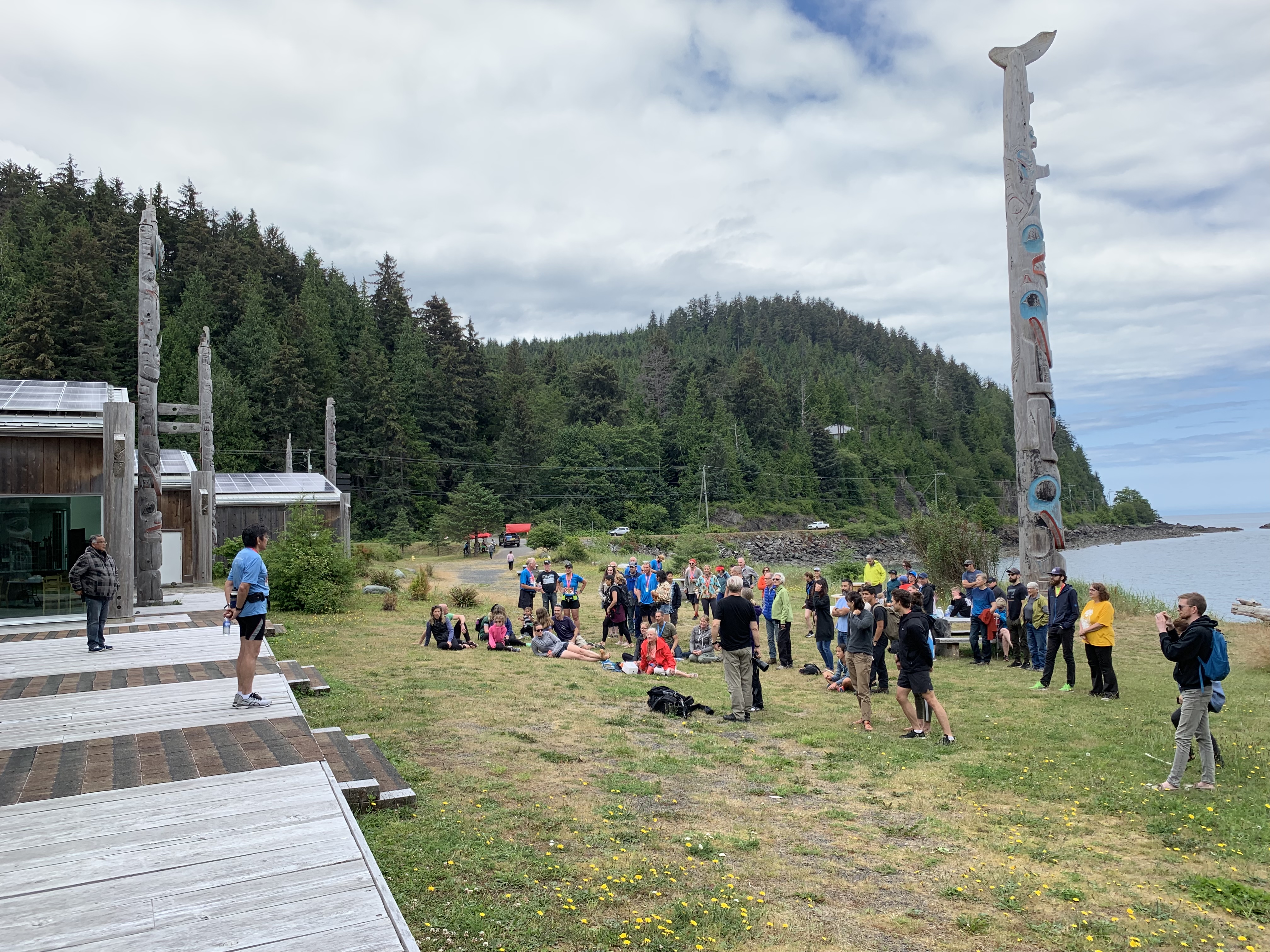 IT WAS PICTURESQUE. I received an award for being 2nd female in the marathon (time of 3:42.35…my third fastest time!) and it is honestly, without a doubt, the best award I’ve ever received in a race. Lots of races just have finishers medals, or if there are not finishers’ medals then they do age group medals. They are pretty generic. Since we are on the edge of the damn country, it’s not like they have access to mass-produced awards….so I was given a necklace carved out of black stone, with the Haida eagle & raven on it, and the Argilllite stone that I am told only Haida are allowed to harvest (made by local artist Tyler York). It’s pretty damn special. 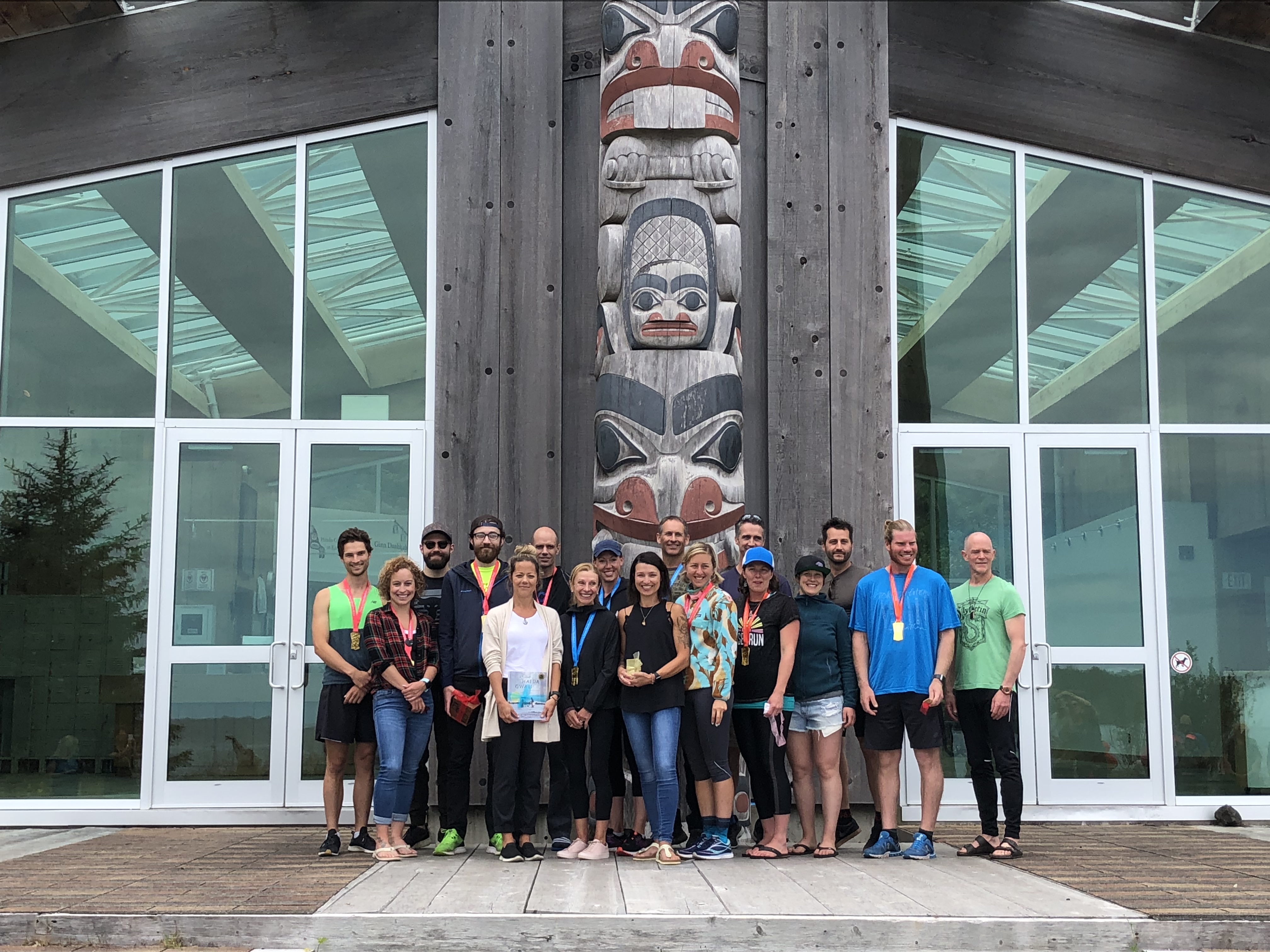 All of the award winners from each event-Marathon, Half Marathon and 10km

After awards, the rest of our trip began. We were only staying three more nights, but we made the most of it and the best we could with a toddler. We walked 400 metres every morning to the playground. And we walked 100 metres from Dave & Heidi’s house to a trail that was a rainforest. We went to a beach, we ate good food, we had a blast! 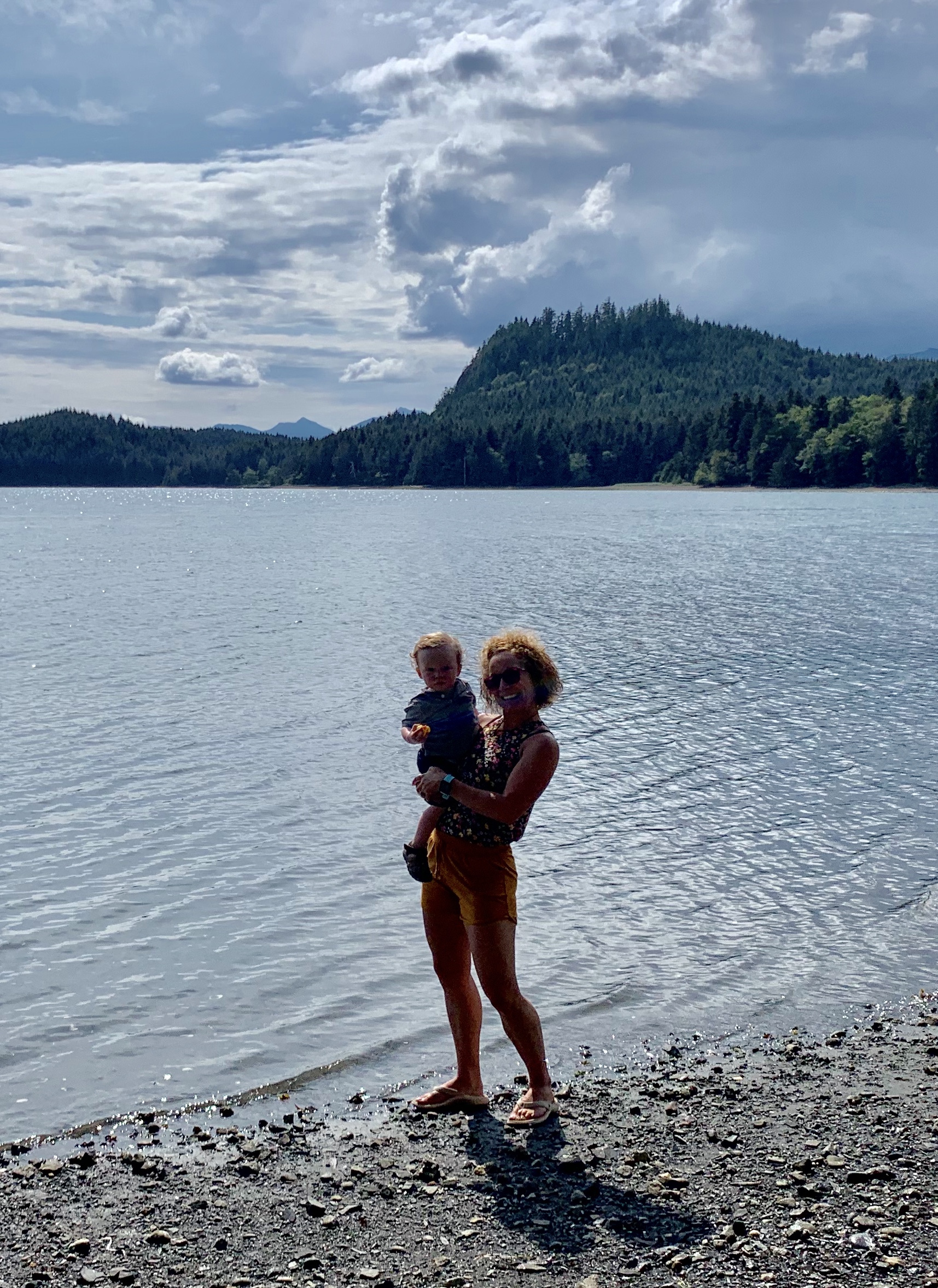 Beach before heading to dinner (Notice the monkey swinging on the rope….)

Dinner at Blacktail in Queen Charlotte 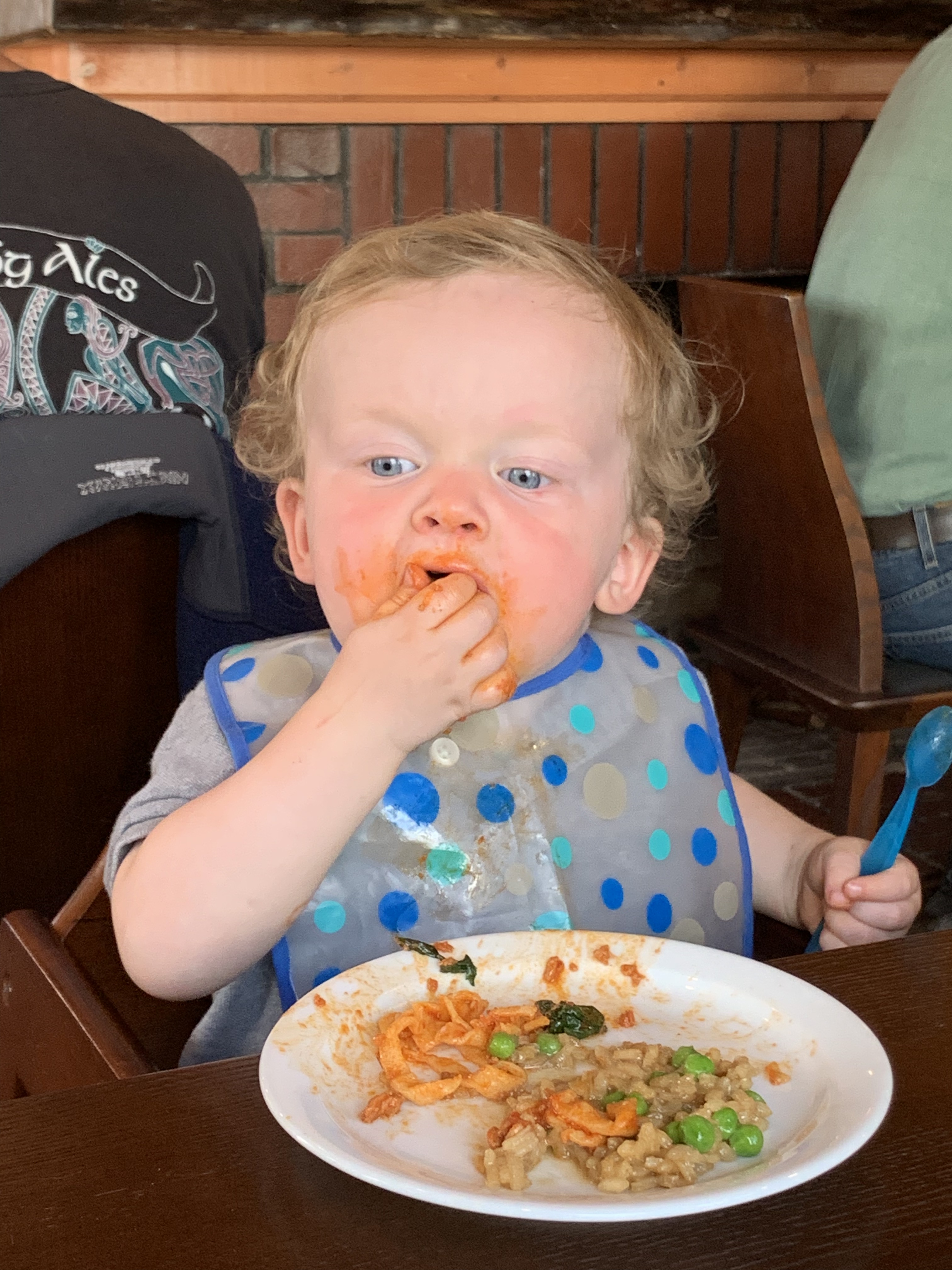 Andy approved of our meals that evening!

Berries are everywhere! Ever heard of THIMBLEBERRIES? Yeah, I hadn’t. Andy LOVES THEM. Find them everywhere! We drove out to see the site of the Golden Spruce (I had never read about this act of eco-terroism, but we found out about it whilebeing here. Well, Dan knew but I did not. It’s super interesting actually!) Wesaw ancient carved Haida canoes, we walked random trails, we did beach walks, we dined on friends’ patios that overlooked the ocean….we did as much as we could. And I know there is more to do.

Golden Spruce Trail is really accessible for all ages

Since I did in fact drink the water at St. Mary Springs on our last day while doing an outing, I know I will “be back”. But even before that,I know I NEED to be back. Our family needs to be back. And if you are interested in travelling to an amazing island in British Columbia, that feels a worlds’ away, you should too. Even if you don’t run. But if you do run, and want to add a bucket-list race, why not run on the Edge of Canada?

Read the sign….I drank the water, so I will return to the Islands someday!

Dinner on our last night at a friends’ house.  THE END!