So, since I’ve been so scattered with my recaps and blog posts, I am not even sure of when the last time I mentioned the fact that I am training for a full marathon.  Not just any marathon, but the Berlin Marathon in Berlin, Germany.  Yes, this is one of the six Abbott World Marathon Major events.  The others are Chicago (completed in 2006), Boston (completed in 2016), Tokyo, London and New York.

I was not planning on running a full marathon this year.  When I was pregnant with Andy, I had told myself that the first year after having him would be just focusing on getting back with running and try to do some decent half marathons.  Fast forward to November 2017, approximately one month after Andy was born.  Dan comes home from race team and tells me that Runners Soul would be doing a travel group to the Berlin Marathon next September and that we should do it.  That’s right—my husband was the one who said we should do it (mind you he hadn’t ran a full marathon yet at this point…)  I would still be on maternity leave, so really…..we couldn’t say no!

I did my winter and spring running, getting my legs back at it and began to feel more confident in my postpartum body.  The training for Berlin would begin a week after the Red Deer Marathon weekend.  I decided to roughly use my same training calendar that I used when I ran Vancouver 2015 and qualified for Boston.

Pushing the running stroller is no joke.  It is definitely helping me with resistance training!  I usually run with the running stroller 3 times a week.  On my speed workout days, I try to wait until Dan gets home from work and then do those runs on my own.  And when we do our long runs on the weekend, Dan and I run together and alternate every mile or two with the stroller.

Berlin is less than 2 months away.  I feel ready, yet I don’t.  The reason why I didn’t want to do a full marathon in my first year postpartum was because I knew I would be hard on myself with the actual result.  Yes, I realize I had a baby less than a year ago, but I don’t want to go out there and be a shell of my former self.  My dream goal is to qualify for Boston again.  The weekend Berlin falls can count for the 2020 Boston Race, and at that race I am 35 and will be up an age group.  So the fact that I get an extra five minutes to my qualifying time makes me think there actually is a sliver of hope that I could do it.

But I also need to mentally prepare myself for if it doesn’t work out.  I can’t let potentially not qualifying ruin the rest of the trip.  I also do need to keep telling myself that YOU JUST HAD A BABY IN THE LAST YEAR and the fact that I am even going out there to do this event is pretty bad ass.  I am just going to keep picking away at my training calendar and hope that all the running I did while pregnant and all the running I am doing pushing Andy in his stroller will help me achieve the dream result-a return to Boston.

From June 30-July 17th, I was back in my hometown visiting family and friends.  During that time, my husband and I were able to participate in a four mile race, and then I was also able to do a 5km race.

Firecracker Four is a 4 mile race held in Hales Corners, Wisconsin.  This is a suburb of Milwaukee, very close to where I grew up.  I had done this race years ago, and was excited to do it again.  It would be an 8 am start on the 4th of July.  I couldn’t think of a better way to start off this holiday!

It was HOT.  that is an understatement, actually…it was HOT AS FUCK.  The humidity was ridiculous.   I believe the “feels like” temp was in the 90s by 7:30 am.  Both Dan and I weren’t sure how we’d do since this felt like a large sauna.

We ran into my college friend Matt before race start, so it was nice to see a familiar face!  He was with his buddy Kevin, who also went to the same college as us.  They grew up in Hales Corners and always do this race every year.  They think it was the biggest turnout this year, with over 1100 people doing the 4 mile run (there was also a walk portion that had people too).  It was also the 40th anniversary of this event so that’s pretty cool. 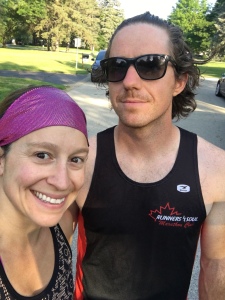 Once the race started, I knew I wanted to just push as hard as I could.  This isn’t my normal race distance, so really I had nothing to lose.  One crazy thing was that before we even ran half a mile an ambulance had to come through.  Dan and I thought it was part of the race, but if you weren’t in the front pack you got stopped to let the ambulance through.

This route went through neighborhoods in Hales Corners.  There were a ton of people in their front yards and driveways cheering us on.  And these kind souls also had sprinklers going and hoses spraying us.  Seriously, I don’t think I would have ran as well as I did if it wasn’t for all the water being sprayed.  They also added a third water stop because of the weather. 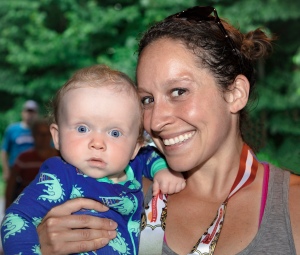 Continuing where we left off at the Firecracker Four…..I did a 5km at one of the Milwaukee County Parks Travelling Beer Gardens.  Oh Milwaukee….you are amazing.  This park is located in South Milwaukee, right along Lake Michigan.  While it was still hot out, it wasn’t nearly as toasty as it was on the 4th.  And being so close to the lake helped because of the breeze.

Take note I had been eating like shit and drinking too much by this point in my trip.   It was July 12th and my body had been going through hell and back.  I really didn’t know how this would go, considering all the damage I’d done to my insides.  This race was a 6:30 pm start, with the “highlight” being that once you finish, you get a ticket for a free pint glass and beer at the beer garden.

I started out strong and felt like with this smaller field I would have a shot at being near the top.  The interesting thing about running races in a location you don’t normally run is that you don’t know your competitors.  When I am in Lethbridge I know who I should be pacing off of and who I am trying to catch.  Here, its a crapshoot.

I ran mile 1 in 6:30.  Alright, this is an epic pace for me.  If I kept this up, I would have a shot at a personal best.  The field had started to thin out, but there was one girl right in front of me.  I decided to draft off of her and hope for the best.  It was an out and back course, so at the turnaround I saw that I was comfortably in 2nd place, within reach of the female leader.

Mile 2 split was slower, at a 6:44.  I got my head in the game and knew I needed to push for that last mile to see what I could get.  I wasn’t sure if my body was going to give up and get another 15 seconds slower or if I could hold on.

I didn’t get slower, in fact, I got faster.  Mile 3 was a 6:36!  Holy Shit!  I kept pushing and pacing off the lead female and was able to come in right behind her with a chip time of 20:50!  The course measured 3.16 miles, so a little long, and other people also agreed that their watches measured it longer.  My time at the 5km point was actually a 20:30, which would be a personal best for myself!  I was extremely satisfied with my performance, placing 1/21 in my age group, 2/74 in female, and 8/156 overall.

The great thing about this night was that my mom and Andy came to watch (Dan had already flown home).  And while we were there, we saw a bunch of people who I knew…Mike & Christina with their kids, Lindsey who I ran with in high school, my friend Amanda and her husband Nathan….this is what is great about coming “home” to run.  I get to see people who I don’t normally see on a daily basis up here in Alberta.  I look forward to the next time we are back in Wisconsin and hope there’s a race somewhere that I can do! 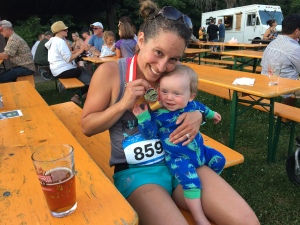