I have hit a roadblock.

After the Vancouver Marathon on May 3rd, I still kept up with my training for that month, as I had the Spartan Montana Beast and the Calgary 50km Ultra. I mustered through those (pretty decently too) and forced myself to take a solid 15 days off. No running at all. My body needed some recovery time. Near the end of that rest period, I contacted Dean Johnson and asked him to make me a summer training plan, with my end goal being to get a sub 41 minute 10km at the Disneyland 10km Labour Day weekend. Training for a 10km…easy enough, right?

Well, last week Tuesday I started the plan. My first run went well, although I may have pushed myself a bit too much. On Wednesday, I was really sore and my hip flexors were in pain, but I did an awesome hill workout. Thursday, though, it started to fall apart. I opted to take off on Thursday (could take off or do 40-60 minutes easy) as I thought I would feel better come Friday. I went out to attempt my Friday run of 60-70 minutes at easy pace. Mistake 1 was doing this at noon. Holy hell it felt like hell. The heat is not my friend. Mistake 2 was trying for the lower end of the pace goal (8:15 minute miles). I should have aimed for 8:45 from the get go. I held it together the first 4 miles, but by mile 5 I had an 8:58. Then I self destructed and ran a 9:43 for mile 6. I ended up running 6.68 miles in 60 minutes and felt like garbage. This weekend, I skipped my 90-105 minute long run and took off both days. I am not even a week into this plan and I am already sliding.

The plan was supposed to help motivate me to achieve my goal of a personal best 10km time. But right now, I’m in such a weird place and having a hard time getting back in to running. Maybe it was the 16 weeks of intense marathon training this winter and spring that just has me burned out. I mean, it probably is. I guess I just thought getting back in to a rhythm would be easy, as I had such a successful first 5 months of 2015. I got my best 5km, 10km, half and full marathon times in that time frame, and I also ran my first ever 50km. I have been on Cloud 9 and flying high! But now, it’s month 6, and I am a proverbial pile of shit.
If this summer is going to be successful “running-wise” I need to get out of this funk and back in the game. I need to start establishing a routine again. Having the framework of one, with my training plan, clearly isn’t enough. I need to be getting up before work to do my runs, as if I wait until after it is too hot out. And if I run when it’s the afternoon sun blazing down, I get crabby. And frustrated. And even after this last week of school, I need to be setting an alarm each morning so I am up and have a normal breakfast and out the door doing my run by at least 9 am. If I can get into this consistency, the rest should fall in to place.

“…there are no shortcuts or paths of least-resistance on the road to reaching something worthwhile.”-Dean Karnazes “Run!”

I participated in the Calgary full marathon, half marathon, and full marathon (again), in 2009, 2013 and 2014.  Calgary is only 2 hours away from Lethbridge, so the ease of access to these events is fantastic.  I didn’t want to drive up there and do the same thing again….so when it was announced that they would be having the 50 km Ultra for a second year in a row, I decided WHY NOT?!?!  I mean, I would have been only a month off my Vancouver full marathon training, so my body would be set, and I had never done an ultra.  And what’s an additional 8 km anyway?  So I registered for the race, and put it in the way back of my mind, since Vancouver and qualifying for Boston was what this year was about. I had been so busy with school and coaching in the month of May, that this race weekend snuck up on me.  I will be honest—after Vancouver, I didn’t properly keep training for this event.  My body was exhausted, and it needed recovery.  I did keep up some running in between Vancouver and the Ultra, but it was no where near what it should have been if I was training for the Ultra as my goal race.  I knew I would be able to finish the race come Sunday, May 31st…I just wasn’t sure how ugly it would be.

I headed up on Saturday morning and went straight to the expo.  The expo is at Stampede Grounds.  It is easy to access, with free parking, but the expo itself is small and nothing outstanding.  I was able to pick up my race essentials, and purchase a cute tank top, all pretty quickly.  I then headed to my hotel to check in.  I opted to book on Priceline and got a steal of a deal by ‘naming my own price’ for a 4 star hotel.  I lucked out and got the Westin for only $75!  They offered a shuttle to the start line on race morning, which was a nice perk.  I also took advantage of the rooftop pool later that afternoon.  Dan’s best friend Chris lives in Calgary with his girlfriend Ashley, and I walked a measly 3 blocks to meet them for lunch.  We threw back a few beers, had some great food, and I lamented how I didn’t really care how tomorrow would go.  When we parted and they headed out to a friends’ party, I was sad to be going back to my hotel alone.  I wanted to go out, not run!  Oh well, I would finish this race some way, some how.

I got up around 4:30 AM, and was on the shuttle at 5:30.  I was only about a mile and a half from Stampede grounds, but having this shuttle was a nice bonus.  I did my bag check, did my pre-race rituals, and was set to go for the 6:30 am start.  The half, full and ultra would all be starting together at 6:30, and the 10km event would begin at 7:30am.  There was also a 5 km that would run at noon!  So lots going on in the morning!  It was comfortable outside right before the race began, but you could tell it was going to get ugly out later on.  Ugly as in HOT.  I tried not to think about it, and when the race began I was off.  I had told myself to try and pace an 8:15 minute mile, as I did 7:49 in Vancouver, but my first mile was just that…7:49.  I knew this was too fast for this hilly, high elevation course. I decided to ease on up and just try and enjoy the race.  By 10 km, I had to go to the bathroom.  Maybe the beer the day before wasn’t a good idea.  This would be 1 of 3 bathroom stops on the course.  The later ones were more so for also having time to hydrate and eat something.  Also around this first bathroom stop I ran into Todd Myers, a teacher at Chinook High School.  He was also doing the 50 km, but he has done crazy races before.  My goal in my mind was now to just stay ahead of Todd. 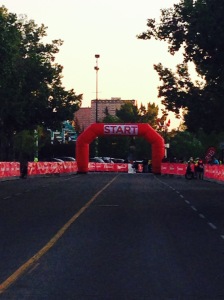 A little bit later, a lady was running next to me and chatting away.  She looked very intense….I could tell she knew what she was doing and was no rookie at this.  I come to find out and realize that this is Dennene Huntley.  Now, you may not know the name, I didn’t know the name on paper…but holy crap this woman is impressive.  She had come back from doing this 24 hour championship in Italy where she ran 193 km in 24 hours.  SERIOUSLY!  And, the funny thing about running into her, is that in Edmonton last year I actually ran into her at the end of the race.  When I was struggling to finish that full marathon, she came up behind me with her friend and paced her friend in to beat me.  She recognized me because I was wearing the same thing I wore in Edmonton, and she had told her friend to ‘catch the purple skirt!’  Her friend was in a similar situation as I was at that race—was trying to qualify for Boston, but didn’t.  It was a heartbreak, much like it was for me.  But her friend, the one who didn’t qualify last year….she qualified this year.  Much like me!  Anyway, Dennene and I ran most the race with eachother from about 14 km on.  We’d lose eachother for a kilometre or two, but then be back together.  She helped me tons complete this race and it was a pleasure getting to know her.  Turns out she knows a lot of the same people as me….my run coach for Vancouver, Dean Johnson….she knows him very well!  It was great hearing her stories as we ran. I could talk about every mile in this race and what happened, but that’d be boring for most of you.  I wasn’t racing this for a record or anything, I was just now on track to really enjoy the experience.  The weather was getting progressively warmer, and the sun was shining super hard.  If there wasn’t the breeze, I would have had to walk for stretches…I hate the heat!  And I have to add, the aid stations saved me this race!  There were tons, and since you do a couple loops past the same spot as you head out and back, and do the extra loop for the 50 km turnaround, you pass some of the stations a couple times.  They had cold water-soaked sponges at a lot of them, and these were amazing.  I think I doused myself in a sponge about 20 times.  I was soaking wet by the time I was done!

I felt fairly in control most of the race until the last 10 miles.  My right leg started to tighten up, especially near my hip flexor and my hamstring.  I wanted to keep on moving because if I stopped, I didn’t know if I would be able to start again.  After I had done the second loop of our turnaround, I had rejuvenated energy, as I knew I was on the home stretch.  I also had no clue of my time after 27.5 miles because my watch died.  We looped back into the city, through East Village a second time, and into the Stampede Grounds.  I was sore, warm, sweaty, tired, and numb…all at the same time.  I was able to cross the finish line in a time of 4 hours 40 minutes and 34 seconds.  The sun was beaming down and I just felt other exhaustion!  I also could barely feel my fingers….it took about 5 minutes to do so, but I am not sure why that happened!  They were bloated and shaking…..nice.  I had put my body through hell and back.  I initially had the thought “never doing that again” but we all know how that pans out….

….because a while later I saw the official results and was surprised to find out I took second in my age group!   As they would say on “A Christmas Story”…..I WON A MAJOR AWARD!  Ok, it wasn’t major…but it is my first trophy ever!  Makes me feel pretty bad ass.  And It also makes me want to do better at it another time.  And how did I celebrate?  I found Todd in the beer tent, found out he had placed 2nd in his age group, and we toasted our personal victories!  And oh yeah….I beat him!