I know…It’s been awhile since posting!  I had a race last weekend, so I figured a little recap was necessary.  Moonlight Run has been a staple for me over the years, and this would be my 6th year participating in the event.  However, it would be my first year participating in the 6km, not the 10km.  I had originally signed up for this race under the impression I would be pretty far along in my pregnancy.  After the miscarriage, I decided not to change up to the 10km, as I had not been training to ‘race’ a 10km.  Yes…I can run a 10km.  But really since September 2016, I haven’t been training to ‘race.’  I know that personally I would have been really frustrated with myself if I couldn’t deliver a performance like I did in the Moonlight Run 10km like I did the past two years (my best Moonlight placing overall and my best Moonlight time).  So, 6km it was!  Hey—it was going to be a personal best, as it would be my first ever 6km race!

I did something else a bit different this year for Moonlight-I volunteered!  Obviously, not during the race itself, but I volunteered at package pickup on Friday.  I decided to help out our Winston Churchill kids who were handing out race swag.  It was fun to be with the kids the night before, and see a lot of the racers before race night.  They apparently handed out 1000 of the 2800 registrations in the first 45 minutes!  It was crazy! 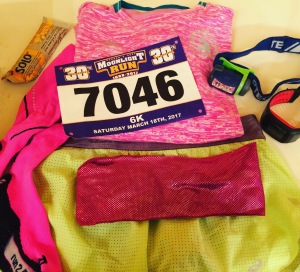 Race night came.  I am always thrown off on nutrition for a night race.  Eat a normal breakfast, a late lunch, and hope your food settles.  I was hoping mine did, and I wasn’t really sure.  Weather was warm, and all the snow/ice had melted that could have caused issues…but it was WINDY.  We would be running into the wind going down the hill and the wind would be with us going back up, so that was a plus.  Dan and I got the race start at around 7:30.  My first task was to find a WCHS student volunteer who would be able to hang on to my vest with keys and phone in it while I ran—success!  It helps to teach the volunteers!  Dan and I mingled around a bit before I found my friend Aaron, who would also be doing the 6km.  We talked about goal times for the race and decided we would at least start together.  Dan was actually doing the 10km, so his race started at 8:00 pm.  He was off running and I had about 15 more minutes to wait for my start. 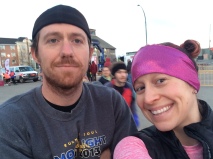 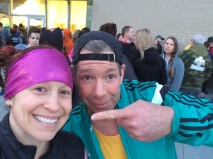 Usually I like to be right near the front of the race start.  It was hard to get really close to the front of the 6km, as there were over 2000 runners!  After the countdown and the airhorn went off, we quickly wove through a mess of kids in front of us so we could have a clear pathway down 3rd avenue.  My first mile felt nice and easy—didn’t push too hard to start, but actually had to “push” down the hill since the wind was so obnoxious.  Ran mile 1 in 6:45.

It was fun running down in the river bottom because again, there were student volunteers from WCHS.  A lot of them could see my coming in my bright pink socks, so it was encouraging to hear them yell for me.  I was really worried by second mile would be a lot slower, but was pleasantly surprised with a 7:09.  Mile 3 was when the wheels fell off.  I knew it would happen, as we had to go back up the hill.  I have done pretty much ZERO hill training, so it was going to hurt.  Even though I was slowly passing people, I was also slowly getting slower.  My push was not there like usual, so I cruised to a mile 3 of 8:39.  By the time I got to the top of the hill, I had a bit of a push left for the final stretch, but the lady who I passed up the hill caught up to me and passed me at the end.  Looking at the results, it didn’t effect my placing in my age group—just overall.  My time was a 29:12 with a 4:53 km average pace (doesn’t show mile pace on the results.  My watch said 7:47.  Compared to last years 10km, my pace is garbage.  Last year, I ran a 4:25/km and a 4:22/km in 2015.  For 10km, versus 6km.  But, that’s what I get for not having the training regime and race schedule like I have in the past years.