Having a kid puts a damper on being up-to-date on my blog posts.  So, since I did three races in May (a trifecta!  5km, 10km and a half marathon) and haven’t written about any of them, I am going to do a post on all three.  This may become a new way of doing things…!?!

I have actually done this race all three years and this was my fastest one yet!  This race is always a Wednesday evening, and the past two years it was hectic getting there because I would have been working during the day.  This year it was even worse because I was trying to deal with stuff at home with Andy before Dan came back from work and  then I had to rush over to the race start.  After parking I got to the start area with less than 10 minutes before the beginning of the race.  Close call.

The weather had been gross all day long and thankfully it cleared up in the evening.  While I would not have minded some rain while running, this is a 2km and 5km race geared towards children and I know they would have been miserable had it been raining.  The 5km runners started first, and the 2km would begin shortly after.  It’s a quick loop from Lakeview School down the green strip towards Bullys, then around the east end of Henderson Lake and back.  I don’t know my splits, because in the rush around the house before heading here I realized my watch wasn’t charged.  Rookie mistake.  But I do know that I finished in a time of 21:57!  I am super proud of this as last year I ran a 25:57(albeit I was 15 weeks pregnant or so) but back in 2016 I ran a 22:16…I beat that!  This sub 22 time that I ran was my goal for my July race in Wisconsin, so now my goal for that 5km will be to beat this time!

Dan and I often go and do this race because his family lives in Red Deer.  This would be my 6th time running this half marathon. More notably this would be Dan’s first full marathon!

The weather was the best I’ve ever experienced for this race.  The race starts and finishes right near Dan’s old high school.  I had originally made a lofty goal of running a 1:40 for this race.  When I started, I had some trouble with my legs.  They just felt heavy.  I really thought that I would be able to shake that feeling after a mile or so, but the heaviness and tightness persisted.  I ended up getting pretty frustrated at the 10km mark, but after I hit 9 miles I had a second wind so to speak.  My last four miles were very consistent and back to where they should have been all along.  Here are my splits:

The weekend after Red Deer was this little trail race.  My friend Angela and I headed out to Fort Mcleod in the morning.  She would be doing the 5km while I ran the 10km.  While it was advertised as a “Wilderness Walk & Run” I guess I didn’t really take into consideration that this would be a trail race, and not on paved paths.  Surprise surprise!

I would say about 90% of the route was either on gravel, pebbles, mud, dirt, or grass.  I was the leader of the 10km for the first two or three miles, which was col, but very mentally challenging.  With no lead bicyclist, I was starting to lose focus and drive to stay at my normal 10km pace.  My feet just kept sinking into the stones and I felt my pace getting slower and slower.

One guy did pass me and he stayed ahead of me for the duration of the event.  But having him in front of me helped me push a little more and get back on track.  Given the terrain of the race (and my loss of focus) my splits were all over the place.  (6:43, 7:36, 7:53, 8:05, 7:57, 7:46)  I was happy to see myself get my last mile back down a bit.  In hindsight, I probably went out too fast and had I known what the terrain would be like maybe I would have been a little less ambitious to begin.  My final time was 47:48, which was good enough for 2nd overall and 1st place female.  I got a sweet handmade ceramic mug as my prize! 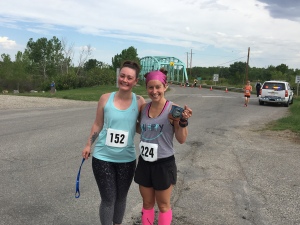 So that was May!  It is already the first weekend in June, and originally I thought I only had one event this month.  But yesterday I joined a relay team for a local trail race last minute.  So who knows what else I’ll decide to do last minute….