I haven’t done a race since my Calgary 50km in the end of May.  Foot surgery in June.   I had just started doing slow 1-2 milers in August.  My non-aggressive Walt Disney World Goofy Challenege plan began at the start of the school year.  I am in no shape to be going out and trying to crush my personal bests.  But that doesn’t mean I have to deny myself running in local events.  So this year, I participated in the Lethbridge Police Race weekend for the fourth time.  My previous times were doing the half marathon.  This year, I would celebrate my first race since surgery (and my 32nd birthday) by running the 5km with my cross country athletes.

On Saturday, October 1st, 15 of the WCHS cross country athletes ran in the Lethbridge Police 5km.  This event has been growing every year—there were 207 runners in the 5km, 164 in the 10km, and 119 in the half marathon.  The half marathon started first at 8:00 am, with the 5km and 10km runners following at 8:10.  My plan this race was to sprint ahead of my runners during the beginning, stop and take photos as they passed, then sprint ahead again to get down the major hill before as many as I could and take more photos, and then finish with some of the athletes towards the back. 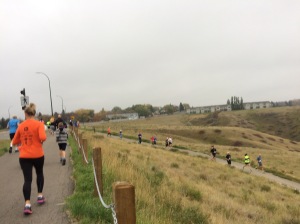 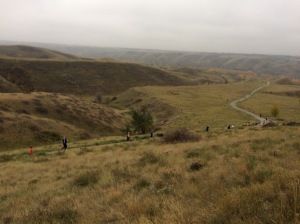 I have to say that my foot felt fine during the whole race and after.  What didn’t was my breathing!  My cardio is still sloppy, and my full out sprints to get to photo vantage points probably didn’t help.  I was able to get a bunch of great photos of the kids (which I need to make sure I share with them) and had fun being out with the community during this local event.

My time was a far cry from my personal best.  But this fall and winter isn’t about setting new PB’s….it’s about retraining my foot how to run properly, build back cardio, and stay healthy.  Sure, it was a bit sad to not be running the half marathon like I had in years past, but I honestly enjoyed watching the Churchill kids run, running with them, and watching other friends from the community finish their respective races.  This race does not always fall on my birthday, but I have to say I would be happy if it always did!  I wouldn’t have wanted to spend my 32nd birthday any other way……well, going to The Keg for dinner later that night was a good way to cap off the day!

When I started this website, I talked about how my culminating race would be in January 2014, in Walt Disney World. WDW has been our family’s place and has extreme importance to me—-it was our favorite family trip. Running a RunDisney event has been on my mental bucket list for years. So, deciding to do it this year with this website and also raise money for American Heart Association and Heart & Stroke Foundation was the right thing to do. I had been set on registering for the Goofy Race & a Half, where I would be doing a half marathon on Saturday and a full marathon on Sunday! Totally Goofy! But then, RunDisney came out with the craziest idea, the Dopey Challenge which takes Goofy to the next level—-a 5 kilometer race on Thursday, a 10 kilometer race Friday, a half marathon on Saturday and a full marathon on Sunday. This is a total of 48.6 miles in four days!

I had to register for it—-I mean, I was meant for this! Even at age 7 in 1991 I was meant to be “Dopey”. A race like this can only happen in WDW, and this is a once in a lifetime experience. The amount of tears I will be shedding all week is going to crazy—-maybe I should start a betting line on it—-and I will get to share the week with my mom, who also registered for the 5 km, and my husband, who will be doing the 5 km and 10 km!

My dad would tell me I am a crazy idiot for doing this. But he would be at every race down there bright and early to cheer me on. He would want to be at Magic Kingdom as early as possible to see me run down Main Street. And he would be smiling. And I know he still will be this January when I do it.