Wow. We conquered the Berlin Marathon! What a crazy experience it was! I could write multiple blog posts, all very long, detailing the day by day events. But, it’s 9 pm on a Friday…I am worn out, sick, and have an 11 month old who may wake up middle of night! So I’m doing a small recap that’ll touch on some details I think are worth noting, especially if you are contemplating making the trek out to do this race.  update.  It is now Sunday.  I hope to finish this post today!!!

Pre-event issue…I started feeling sick on the Tuesday before the race. At first I thought it was just my body being sore after boot camp, but I think I was just wearing out. On the drive to my in laws on Wednesday, I started popping cold medicine because my nose was a running machine. Great…a transatlantic flight is upon us and I feel like trash.

I think the whole adrenaline of the trip made me feel better, because once we got to the airport I just forgot about it. But the transatlantic flight was tough. We left at 6 pm Thursday. It was my first time flying overseas and the first leg of flight was 9+ hours from Calgary to Frankfurt. Neither my husband or I slept well. But we kept pushing. By the time we got to Berlin it was 2:30 pm (8 hours ahead of home). Our only confusing transit issue in Berlin was getting from the airport to hotel. We hadn’t researched which “zone” we were travelling to, and the lineups at the machines to buy tickets were long with a lot of other confused people. We did make it to our hotel eventually…freshened up, changed, and headed to the expo. 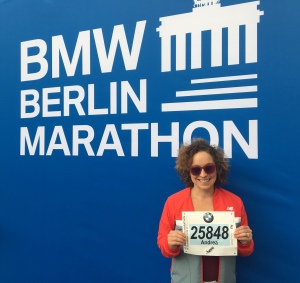 The expo was very easy to get to from our hotel. I booked our hotel on Priceline in December and got it at a rate of $82 USD/night. It was walking distance to the Friedrichstraße station, which could link you anywhere. And also walking to the start/finish by Brandenburg gate. We got to the expo quick, and arrived around 5pm.

I’m glad we didn’t have anything we really wanted to stop and purchase because this was the first instance we realized this event was going to a semi-organized chaos. The room to pickup your race packages were in the way back of the old airport hangers, and everywhere around you there were lines. And the lines weren’t straight, just a mosh pit of people pushing through. Luckily I had preordered us two event shirts (no shirts included in registration fee) so we didn’t have to push through people to buy them. Just had to find that line to pickup.

We didn’t spend much time at the expo. We headed back to the hotel, went out way too late, and then slept in the next day. It was the day before the race, so in theory we should have been taking it easy. But seriously…we were in Berlin. We needed to see as much as possible.

We did a short shakeout run by the river. After changing and finding food, we then trekked around Berlin seeing all sorts of sights. Highlights included Humboldt University, Reichstag, Checkpoint Charlie, Hitler’s bunker, Berlin Wall memorial, and Topography of Terror. We also had a group dinner that evening for all of us in the Runners Soul group. Ate at a fantastic Italian place called Via Nova II. By the time Dan & I made it back to the hotel we had clocked in 11.5 miles. Time to rest for the marathon! 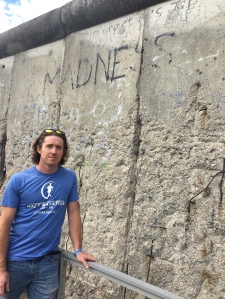 Marathon morning cake bright and early. But with this being a 9:15 am start time for the elites, and our hotel so close to the start, we didn’t have to get up at a ridiculous time. We had pre-bought some breakfast items the night before and I went to the McDonalds two blocks away to get coffee at 6:15 am, so we were set. The group met at 8 am for a photo and then we all dispersed.

Biggest thing to know about this race is that the Europeans “organize” things differently. 44,000 runners and I’d guess the number of pre race porta potties available were 1/10 of what was available at Boston (25,000 runners). My friend Heather waited 45 minutes to use one and missed her corral start. Dan and I stood in line for about 15 minutes and then left the race grounds to go to a cafe, pay 0.50 euros at a turnstile, and use their bathrooms. People were pissing all over the park on their way to the corrals. It was disgusting. I don’t know if the city just doesn’t have the supply of porta potties or what, but you’d think since they’ve been doing this race for 44 years they’d know it’s an issue. 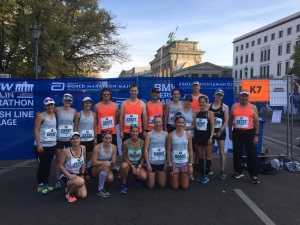 So the race itself.  Well, it was 26.2 miles through Berlin and my Garmin clocked it as 26.44 miles.  That’s bound to happen in a race this large with all the weaving going on.  Instead of going through a mile by mile recap, I want to just note some key things during the race. 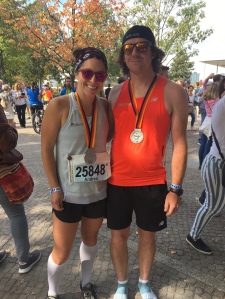 Below are a selection of the professional race photos (which I bought).  I will say that these photos are of higher quality than the Marathon Foto ones I am used to from North America races.  I wish I had seeked out more photographers for pictures before and after the race so I could have had some with Dan.

And we are off! 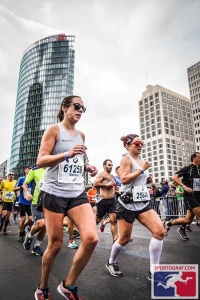 Probably my favorite photo, having an on course beer with less than a mile to go.  The tossing of the cup totally captures how we feel.

Brandenburg Gate in the background and coming into the finish!

THIS WAS AN AMAZING EXPERIENCE!  My husband and I would have not been able to take part of this if it wasn’t for Runners Soul in Lethbridge putting together a travel group.  Also, if I was not still on my sweet 1-year Canadian maternity leave (sorry Americans) then we could have not left the country during this time of year…teachers have a great amount of days off, but you can’t just take time off at random times!  Oh, and if my in-laws couldn’t have watched Andy for a week then this trip would have been impossible..We want to do more races overseas, particularly finishing the Abbott World Marathon Majors.  We have New York (yeah, not overseas), London and Tokyo left for myself.  Dan still needs Chicago and Boston too.  We hope that Runners Soul does more travel groups to these races and that we are able to attend.  Dan still does not love running.  However, he loves these experiences of seeing new places and being with friends.  On our drive back to Lethbridge we talked about races in the future we want to travel to.  It is awesome that we have a common hobby that we can enjoy together. Until the next race…..Auf Wiedersehen!