Back in 2013, I “Ran the Trailbreaker” when I was home for Easter.  It was the start of my racing season, with my ultimate goal being completing the Dopey Challenge in January 2014.  I was surprised at that race when I beat my former personal best, running a 1:52.53.  Little did I realize at the time (I am still realizing it now) that this race lit some fire under my feet and I’ve been pushing ever since.

It was great to be back for Easter in Wisconsin this year, and even better that the Trailbreaker fell on the same weekend I would be leaving.  While I knew catching my flight would be tight, I still signed up for the 9:30 am half marathon start.  What was even better was that two of my close friends, Melissa and Gretta, would be running also!  I was able to meet up with them the night before the race, back in our childhood homes, but also got to see them race morning.

The week of Easter was actually pretty nice weather.  However, Wisconsin weather has a mind of its own and it decided that a snow/sleet/hail/rain combo at barely above freezing would be smart.  Thanks a lot!  So, race morning was less than desirable.  I have admitted before I actually like running in the cold…but the rain and wind and then slushy melting snow on the paths is nothing close to fun.

I really didn’t know what to expect from this race, as I had eaten and drank too many Wisconsin indulgences over the course of me being home.  In my mind, I had a lose goal of breaking 1:40.  (My personal best is a high 1:35, which I ran last year at the Calgary Hypothermic Half).  I ran a mile warm up and realized it would be slippery.  I knew I didn’t want to fall or do anything stupid, which would then ruin my ability to run in Boston, so I thought that maybe just taking it easy and being in the mid 7:30s-7:50s may be best.  Either way, 9:30 hit and I was off.

Staying inside before the last minute of race start with Melissa & Gretta! 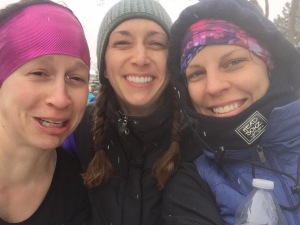 Immediately after the National Anthem, we shot this gross selfie.  Note the hail in my left eye.  Gross

The first mile wound us through downtown Waukesha and then we were eventually on some pathways.  The bridges were so slippery!  Almost every picture that was taken catches me looking down on a bridge as I was scared to fall.  It is an out-and-back course, that takes us on to part of the Ice-age trail.  For it being a nasty day out, and a relatively small race, there was still great support from both friends, family and volunteers.  Lots of volunteers were located at any and every confusing intersection or turn.  The first 7 miles there were always a handful of runners around me, either passing, me passing, or us interchanging positions.  I ran respectable times of 7:30, 7:52, 7:51, 7:56, 7:47, 7:48 and 7:50.

By this time the turnaround was near…or maybe I had hit it.  Either way, I knew I was third female, but 4 and 5 weren’t far behind.  The way back was going to be much easier, in theory, as the sun was starting to try and come out and the wind would be with us.  I started realizing I had gas left in the tank and I may as well push and get this thing done.  I did have a plane at 3:00 pm to catch after all!

Yes, I run in pink socks as much as possible!  My feet were soaked here.

I didn’t have much time to rest, as I really did have to get on the messy roads and drive the 35 minutes back to my mom’s house.  My whole body was shaking, and some weird muscles in my leg that I didn’t know existed kept twitching.  Either way, I was beyond pleased.  I hit my goal time, I ran negative splits, I was able to see my good friends, my ailing foot held up fine, and I was able to run in my home state of Wisconsin.  A fine way to end the Easter Holiday! 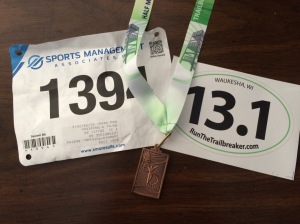