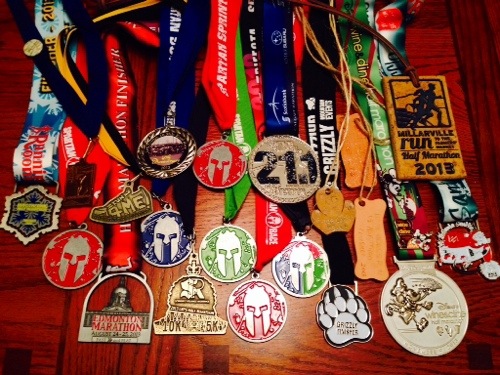 There is that. That picture is worth a thousand words.

While this is a mix of finisher medals, placing medals, and challenge medals….they all share in common that they are some pieces of special bling I earned during 2013. I registered and competed in 21 unique races so far in 2013.…I say “so far” as I will be doing race 22 tomorrow when I run the Brita Resolution Run 5km with my good friend Kelly! The mix of races I ran this year weighted heavily on half marathons, along with some 10kms and unique distance 10-miler and 35 km trail races. I also got snatched into the whirlwind that are Spartan Races, where I completed 3 Sprints (5km), 1 Super (14km) and 1 Beast (21km) which earned me a coveted Trifecta Tribe medal!

Those aren’t the only important numbers of 2013.…I went into the year with a two year old half marathon PR of 1:54:19, from Woody’s RV Half in Red Deer 2011. I wanted to break that sometime during this year! While back in Wisconsin for Easter……First race out, I hit 1:52:53….holy crap.….I was hoping that wasn’t the peak! I went on to break this NEW PR three more times during 2013! My best ended up occurring up in high elevation-ville of Lethbridge, where I ran a 1:41:07 at the Bare Bones Half! I never thought I would now be setting my sights at sub 1:40!

More numbers…..1155 & 1621. These are the dollar amounts I have fundraised so far for the Heart & Stroke Foundation (Canada) and the American Heart Association, respectively. I began this fundraising journey at the start of 2013, with the roll-out of this very website. My year would be devoted to running more races than my previous years, and all races would be ran in memory of my father, Andrew Lammers. This April 25th marked the 9th year since his passing. He was only 51.

While the medals are the tangible item I can now hold in my hand to reflect and remember the races of this year, there is much more that I have gained by competing in this ridiculous number of events. The personal bests…the fundraising goals being met and surpassed…the new race experiences….doing it all for Dad…….and now it’s one week until I leave for the culminating event of the year….the Dopey Challenge….2013 has been an amazing year. I can’t wait for the start of 2014!