When we planned our trip to Disney, I asked my husband if he wanted us to try and incorporate a race weekend into it. Since we both agreed that it would be fun to do a race weekend, (and more so since my mom would be there with us so she could watch Andy on race mornings) we went ahead and planned our trip around the Star Wars Half Marathon Weekend.

I am going out on a limb here and saying that this race weekend has some hardcore Star Wars fans. Sorry, but Dan and I aren’t. Well, Dan has seen all the movies and enjoys them. I will admit that I have only seen the third movie in the original instalment….yes, I suck. So with all that being said, our takeaways from the race weekend will be a little different than those of people who are hardcore Star Wars fans. 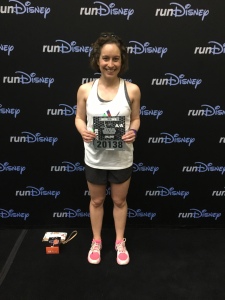 We arrived to Disney on Thursday of race weekend. We headed over to the Expo at around 5pm that night. I am usually at Disney race expos right when they open at the morning, and the last time I went in the evening was Wine & Dine 2013. I need to give two huge thumbs up to what I view as positive changes at the Disney Expo. The official Run Disney merchandise is no longer in the main exhibition hall. They have it in a separate field house. The last few years the lines to get into the exhibition field house were CRAZY and it was all because of the official merchandise. Now, we weren’t at the Expo first thing so I am not sure how crazy the lines were in the morning. But Dan and I were able to casually walk in and look at merchandise without having to wait. I hope they keep it like this!

Now onto race morning! RunDisney events are still very early and that poses a challenge in itself. My alarm went off at 2:30 am…gross. I had it this early so I could pump before we headed out. I woke Dan up at 3:20 am, and we were out the hotel door by 3:45 am. Getting on the provided transport to the start area was a breeze and we were dropped off shortly after 4.

This was the first RunDisney event I’ve done where we start at the Ticket & Transportation Center parking lot. A major pro in this start area is that you do not have an epic journey to the corrals like you do when it starts at EPCOT. There are also TONS of porta potties.  We made our way into the corral at what I thought was a decent enough time ahead of the start (30 minutes) but we were kind of stuck in the middle of the pack.  The corrals for the 10km are a bit frustrating because if you are a runner doing just the 10km, you don’t need a proof of time submitted.  You just submit an estimated pace per mile and your are assigned a corral that way.  So there are presumably some runners in the corral who should probably not be in corral A.  I made Dan hold my hand as I weaved our way up towards the from 1/3 of people.  I gave up trying to get closer to the front at that point.

Race started at 5:30 am.  Dan and I were both going to race it the best we could, and not necessarily stay together.  Had to do some careful zigzagging the first 400 metres or so to get around people who didn’t really properly self-seed themselves.  But then we were good.  Dan was ahead of me to start and I just tried to hold my own.  My goal going into this race was to run in the 45 minute range.  I set this goal back in January when I made running goals for the year.  I wasn’t really sure if this was too lofty of a goal being that I ran a 47:13 in mid March at Moonlight Run 10km. But I figured I would just push it and see what happened.

I will say this about the race; the first 5km was so boring.  Once we go away from the Ticket & Transportation Centre (which was by half a mile) we were just on a boring straight away of darkness.  There was really nothing to see and no entertainment around.  I then just had to focus on every female runner that was ahead of me and kept my mind thinking about catching each one.  This gave me something to think about while running, because otherwise there was absolutely nothing to see.

The humidity was bothering me a bit, but I made sure to grab water at the water stations and dump it over my head.  It wasn’t that ‘hot’ outside, but I was getting sweaty very easily so I knew I needed this water dumping to cool off and keep myself sane.  It wasn’t until mile 4 that we actually got to some scenery.  This is when we entered Disney’s Hollywood Studios. 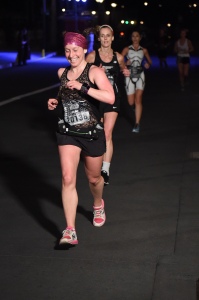 I had a lot of fun from mile 4 until the finish.  Since we were now inside the parks and hotel areas, there were lots of photographers.  As hot and sticky as I was, I still managed to smile and wave whenever I saw a photographer.  I was being competitive in the race but also trying to stay light hearted and have fun.  It was somewhere between mile 5 and 6 that I saw Dan.  I could tell the humidity was getting to him.  I caught up to him and hoped that it would keep pushing him and that we’d finish together.  Spoiler: we didn’t, as I did stay ahead of him during this race.  But during the half, we ran together and if we hadn’t I think he definitely would have finished before me (more on that in my next post).  I ran mile 5 and 6 in 7:14 and 7:25, respectively.

When I crossed the finish line, my official time was a 44:58!!!  HOLY SHIT! I not only achieved my goal but surpassed it!  The distance on my watch read 6.30 miles, which is common in a race like this due to crowds and weaving in extra distance.  I was so excited with my time and I hung past the finish line for a few seconds to wait for Dan to cross so I could tell him. 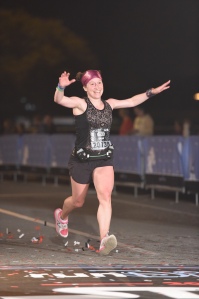 By the time we walked through the post race area and got on the bus back to the hotel, unofficial results were coming in on the RunDisney result page.  While I was hoping for an age group award, what I came to find out was that I was one of the top 10 female finishers.  I did not see that coming!  After all was said and done, I was the 10th female finisher in the race, out of 6005 women!  Keep in mind, a lot of people do RunDisney races for different reasons.  Many people are doing them as their first race, and because of the required race pace many people will walk.  But regardless, I was ecstatic!  I did get my age group award I was hoping for, placing 2nd out of 940 in the 30-34 female division.  RunDisney will mail the awards in the next coming weeks so I look forward to receiving it.  The icing on the cake for this race was that Dan and I were back to our hotel by before 7 am and Andy and my mom had not woken up yet!  Time to wake them up and start our Saturday!