I’m not someone who partakes in “Virtual Races” much.  For those of you who don’t know what a virtual race is, it’s any event where you register to race the set distance but on your own course.  Some actual road races offer virtual options, which usually need to be completed and logged during a certain window of time.  And some companies put on virtual races just as events where people can log their times and earn a medal to commemorate the run.

The times I have done so was when I did a Digital Running Virtual Run to tack on to my RunDisney Dopey Challenge in 2014 (Hat Trick medal, Grand Slam medal), an “Interstate Challenge” (run a race in Canada and USA…easy!) which then led me to doing a “Time of the Season” challenge with them (run at least a km race in every month of 2014….HUGE four piece medal once done!)  I also did the Knotts Berry Farm Coaster Run 10km as a Virtual Race in 2015 solely for the Snoopy medal.  I mean, duh….

I would rather just be out running an actual race than doing a Virtual Race.  And a lot of the Virtual Races that I see people doing are through promoters in the USA, which then means its a US dollar registration fee, and since our exchange rate in Canada isn’t really that great at the moment it just gets pricey.  It has to be something special for me to consider a virtual event.

In Spring 2016, RunDisney announced their first “Virtual Running Shorts” which would take place in the summer.  There would be 3 different 5km virtual runs you could do, one for each month, with a different medal for each month plus a challenge medal if you did all three.  I was intrigued by this last year since I knew I couldn’t run that much distance in the summer, as my foot surgery was early June, but opted to not push myself post surgery with events (even if just a 5km virtual run).

This year, RunDisney offered the Virtual Shorts again and I jumped on board pretty quickly.  The price tag sort of made me contemplate if it was worth doing-each virtual race was either $40 a piece or you could pay $142 for all three plus the challenge medal and other goodies.  This was then when our Canadian dollar was really at its worse, so after the tax and fees and exchange rate, I did end up paying quite a bit for what is basically just appears to be 4 medals.  Would it be worth it?

I was impressed with that I received my package from RunDisney very early in June—even before some other people in the USA!  They mail you all four medals right away, each individually packed, plus the other goodies which was a collapsible dog bowl, dog tag, and cool towel.  The additional goodies were only for if you registered for the whole challenge, and are dog items since the mascot for the series was Pluto.  They are definitely not something on their own worth registering for, and if you don’t have a pet there really isn’t a use….but I have to say we used that dog bowl a lot this summer with all our travels to and from Calgary for Snoopy’s acupuncture! 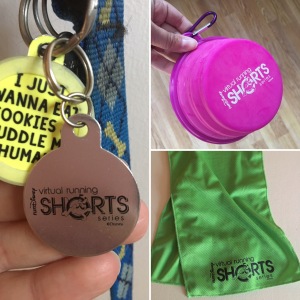 I opted to keep all the medals in the box and would only remove each one as I completed a race.  What’s the point of hanging them all up right away?…I needed to earn them! 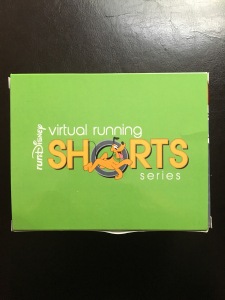 Since I wanted to be able to hang my medals early each month, I tend to chose early dates to complete my virtual run.  I also tried to choose days that were important to me, just to make them a bit more special.  I ran my June 5km on June 7th, which would have been the day of my dad’s 65th birthday.  I was 19 weeks pregnant at this point, and full of emotions, as Snoopy was not yet back to walking.  I finished this 5km in a time of 34:55. 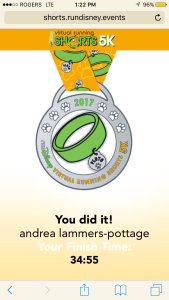 I opted to use the Canada Day Red Dress Run 5km event as my July digital run.  That event ended up being closer to 6km in length, but I made sure to stop my watch once I reached the 5km point so I had a time for my virtual run.  I had most fun doing this run as part of the RunDisney Virtual Running Shorts series mainly because I took the “Dress in Red & White for Canada Day” theme as the opportunity to wear my Minnie Mouse tutu!  It was also fun for it being during an event, as I pushed myself a bit more and ran a 31:45.  I was 22.5 weeks pregnant.

I couldn’t wait any longer for my last medals, so once August 1st rolled around I went out and did my final event.  The whole month of July had been incredibly hot, but I had stuck with my 4 days a week training plan of running.  Honestly, having these little 5km virtual events each month helped keep me going through the heat and this pregnancy!  I was just shy of 27 weeks along in my pregnancy when I completed the final 5km, in a time of 35:41.

All four medals are hanging proudly on my medal hanger, and I even made sure to hang them right by all my other RunDisney bling!  Participating in this virtual event was perfect for me, given that my last half marathon was end of May and that I wouldn’t be doing any other long races this summer during my pregnancy.  It helped keep me accountable this summer, when otherwise I may have just gotten frustrated that I wasn’t registered for any summer time 10km or half marathons.  If someone needs a little extra push, this race series may be a good option for you.  While I most likely won’t do it again next year (I’m doing Start Wars-The Dark Side and Disneyland Half Weekend, so I get the real deal!) I am happy that I registered for it this summer!

In anticipation for my RunDisney experience of my life, the Dopey Challenge, I decided to ask my mom to dig through the old albums and find a handful of “ugly” Disney photos from my trips back In the day. Now, her response immediately was “I don’t want to do this tonight….” Followed by “You weren’t ugly!” Then I restated it as “awkward” and she decided to do the searching.

She sent me 7 photos, in no particular order. However, I will sort them by years in order for your viewing enjoyment. The first photo is from my first Disney trip in October 1991. I was 7. 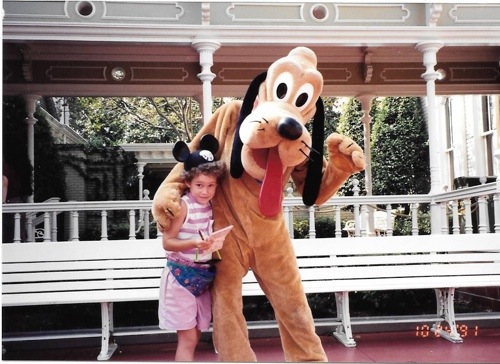 This is fun and funny because 1.) I have a coordinating lavender and white tank with corduroy shorts. 2.). I have on a giant fanny pack with I am sure just a mini pack of Kleenex and room for my autograph book. 3.). My Mickey Ears don’t fit over my Afro. But I still love the cuteness and innocence of it all

Next up is also from October 1991. Enjoy me posing like a loser on the bridge in the Japan Pavillion at EPCOT: 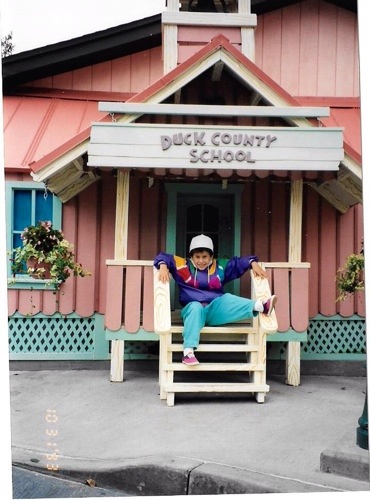 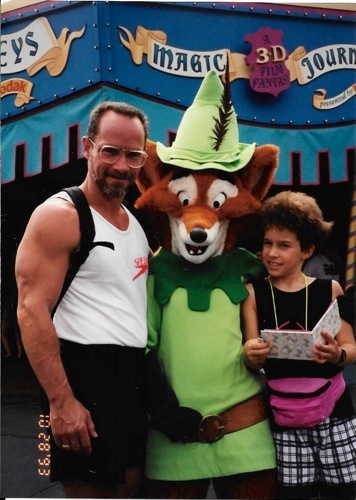 From what I can gather by looking at these two photos….I enjoyed wearing MC Hammer Pants, windbreaker, hats that fit over my Afro, fanny packs were still cool, and I still enjoyed coordinating colors and plaid shorts. :::sigh::::

1995. Family trip #3. Short “Jerome” haircut that fits nicely under a hat, big bad glasses, and a cheesy grin. I think the Evil Queen says it all:

1997 brought the times of shortalls and plaid tank tops. Did I think I was country? Or southern? Or cool? Sweet big pewter LOVE earrings too. This photo makes me smile, though, as it catches my dad and I sitting on the now defunk Mike Fink Keelboats. My Afro is grown out and I’m sporting a middle part. And dad is sporting an embroidered Disney Muscle shirt like it’s his job!

After 1997, my looks and attire got less awkward. Who knows…probably in 5 years I’ll be laughing at crap I wore this year. But at least I grew out of my short Afro hairdo and bad glasses and fanny pack stage. Please note….my mom DID NOT send any photos including shots of her back in the day with us. I think I got my fanny pack skills from her 🙂

In closing…2000. Now in high school and too cool for posing for photos, so instead I’ll sink into the tube at Stormalong Bay at Yacht & Beach Club!