Oh man.  Where to start?

At the beginning of March, I opted to have a cortisone injection into my foot.  This was performed after I had a “test run” injection of some other solution (yeah, I’m that bad that I couldn’t even name what they injected into my foot…but then i referred to the photo i took and it was Xylocaine.)  This first injection was to give me pain relief for a 3-5 hour window.  If this was successful, then a cortisone shot would most likely work. 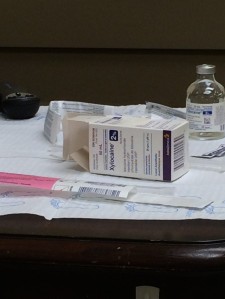 What got injected in round 1

What this first injection caused was pain, swelling, and not to mention, the fact I almost passed out during the shot!  That’s not surprising, because I have a history of passing out with needles….the first time I attempted to give blood when I was 18, after getting a flu shot at the student health center in university as part of a flu study trial (which I got paid $40 for by monitoring the injection site for two weeks)…some of the more recent ones also involved when I gave blood.  Not during the process, but after.  Donated blood and got lightheaded and had to sit down and get help from workers at Safeway grocery store…..TWICE.  My personal favorite was when I walked through The Bay department store after donating blood and then went to check out at the till and passed out briefly.  They had to get the workers at the blood clinic (it’s in the same mall) to come down with a wheelchair to get me, wheel me back, and phone my husband.  Oh, and lets back pedal to the original needle pass out occasion—when I went and got my belly button pierced when I was 15 (but lied that I was 16) and as I walked back to the car with my mom I passed out in an alley in West Allis.  I still have a scar on my elbow to prove it.  I think I was so hyped up that passing out just seemed like the right thing to do.

So, with all those needle freak outs/meltdowns/pass outs, you would have to know I would not handle this injection well.  The doctor had to go in blindly to my foot, without using ultrasound, and had to try it three times until he knew the injection had taken.  It was on the third time that I had to lay down, starting sweating, and started seeing stars.  I left the office after the first injection with high hopes, but then found myself walking around the house in pain, and I couldn’t even put full pressure on my foot, let alone put my shoe on my foot.

By the morning, my foot was better.  I had phoned the doctor a the previous night as the pain was overtaking me, and he believed that the shot may have irritated my arthritis.  Great.  So, a normal person would then cancel their second appointment for the cortisone.  I did not.

I am getting desperate, as I need to somehow function for the next four weeks and finish my training, do some races, and then run the race of my life:  The 120th Boston Marathon.  While Boston is all about completion, I have put a ton of training in, and don’t want to take it ‘easy.’  I still plan on pushing myself, though, I don’t necessarily expect a personal best.  So a week later, I went in for the cortisone. 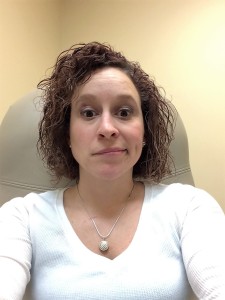 I was better prepared for the needle, and it only took two times to get it injected into the correct spot.  I also creepily took a video of the doctor during the first injection, as to keep my mind off of just thinking about the pain.  This helped, and I didn’t pass out.  I know, after looking at my photos, its obvious I have a tattoo on my foot.  And I have many others too.  But tattoos never cause the pass-out feeling.  Just when the needle is actually under my skin….ugh.  So the cortisone shot was over and done.  The kicker with the cortisone was needing to take one week off of running.  I figured this was worth the chance of possibly being in less pain and having my foot less swollen after.

During those days off, my foot felt good.  It not swell like after the first injection.  I spent lots of time using my TENS machine and taking baths.  Once a week was up, my first training runs (Starting March 7th) went well.  By run 4, however, my foot was flaring up while doing a tempo workout.  Maybe the cortisone won’t help….and then on Sunday I went out to do a long run of 2 hours and 45 minutes max (20 miles max) and stopped at 14.25 miles.  While every mile was in the pace range I aim for during long runs, my foot was throbbing and I just didn’t want to push on. 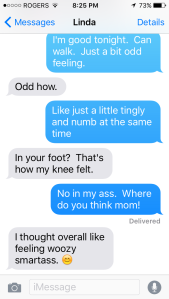 iMessages with my mom, post-cortisone

Does that mean I would quit during Boston if the pain took over?  Hell no.  I just don’t want to make it worse before Boston.  That seems silly because training for Boston and doing races in town before Boston is obviously messing it up more.  If the pain takes over in Boston, I know adrenaline, support, and absolute awe will take over.