—-——-——-——-——-——-——-——-
I ran my first full marathon in May 2005. 10 years ago! It was the Madison Marathon in Madison, Wisconsin. I trained with a plan my friend Matt had put together and was able to finish in a respectable time. I was sore and felt like junk afterwards though! My body wasn’t used to the beating it was put through. I honestly couldn’t lift my leg over the tub to get into the shower a few hours after the race! But, even with all that pain, I was hooked. It felt great to do something not everyone can do! I did my second marathon the following year in 2006, when I repeated that very event. The heat index was out of control and they actually closed the course after 5 hours and 15 minutes. Thankfully I had finished.

—-——-——-——-——-——-——-——-
I did marathon number 3 that same year in October-The Chicago Marathon! It was my first BIG event! 40,000 runners…through the streets of a big city…amazing crowds….I broke 4 hours in this event and felt unstoppable! The next year I did Madison again, and I dropped a few more minutes off my Chicago time. Wow…maybe I can keep dropping time? Maybe in the future I could qualify for Boston? Well, reality hit when I ran the Milwaukee Lakefront Marathon in October 2007. I ran my second worse race, hadn’t really properly trained (I had been working at Badgerette during the summer running Pom Pon camps and not really taking training seriously in between). When I did Madison Marathon the following May 2008, I only dropped half a minute off my Lakefront time. Maybe I wasn’t meant to get any faster??

Then I moved to Canada. And I trained in Lethbridge for my first marathon in Canada. While the training seemed to go well, my body wasn’t well adjusted to the elevation and I bonked. I did awful. This was the Calgary Marathon in 2009. And after this race I took a hiatus from full marathons until January 2014. This was when I ran the Walt Disney World Marathon to cap off my Dopey Challenge four race adventure! Now, I had trained extensively for this event, doing many 10km and half marathons in preparation. And during that time I had dropped down all my shorter race times and had gotten faster! And all that hard work paid off because I didn’t just break 4 hours, but I ran my fastest race yet! This got me thinking about the elusive Boston Marathon again. If I focused on training for full marathons again and took my training up a notch, maybe, just maybe I could drop enough time to make it there! I trained for the May 2014 Calgary Marathon. I ran in, running way better than I had in 2009. But it wasn’t good enough. I was frustrated. I quickly registered for the Edmonton Marathon in August 2014, hoping to shave enough time off. I faltered. And it hurt. Maybe it was time to retire after running 10 marathons… 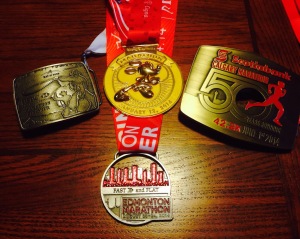 I decided to give my Boston Qualifying attempt one last shot. I trained my ass off for my 11th marathon, the Vancouver Marathon held this past May 2015. I had a training plan made specifically for me, and took things more serious than I ever had before. It was all or nothing. And that attitude paid off. I not only made the 3:35.00 qualifying standard for Boston, but I smashed it by just over 10 minutes! After 10 years of running marathons, I had finally achieved what every runner wants-to qualify for the prestigious Boston Marathon. And while one would think that marathon 12 would be Boston in 2016, it actually was when I went back up to Calgary in the end of May 2015 for a little redemption. I ran the 50km Ultra during Marathon weekend in a time of 4:39.37….I ran 50km in Calgary faster than I ran 42.2 km in Calgary 2009! I even managed to podium in my age group!

So now what? Well, marathon #13 will in fact be Boston 2016. I register for that during the second day of rolling registrations, on September 16th, 2015. Running my qualifying time by over 10 minutes paid off! I am all but set to be running the 120th Boston Marathon. I cannot wait for marathon #13, as it will be so sweet. Spending over a decade of my life…my 30 years life….so 1/3 of my existence….running marathons has paid off. Yes, it is a hobby, but it is an important one. Running all these races have taught me determination, focus, resilience and mental toughness. I faced triumphs…and frustrations. But I never gave up. Never, ever give up.

How am I going to do that? Well, a Disney trip of course!!!

Next week, my mom and I head down to WDW for 7 nights. We will be staying at none other than Disney’s Polynesian Resort. We have not stayed at this resort since our first family trip in 1991! Since our stay at Polynesian, we tried “Moderate Resorts”, like Port Orleans French Quarter, “Value Resorts”, like Pop Century, and other “Deluxe Resorts”, such as Yacht & Beach Club.

Our decision to try Polynesian again now some 23 years later was definitely rooted in nostalgia. This was the resort that started our family addiction to Walt Disney World! The location on the monorail is ideal for visiting Magic Kingdom at a come-and-go pace, and with all the new attractions in New Fantasyland, we will be focusing on the original gate a lot!

The Polynesian Resort has gone over lots of refurbishments the past 2 decades, so the views of the quiet pool and the general resort footprint won’t be exactly the same. The photo above is an aerial shot of the Polynesian in 1991. I hope they sell new ones in the gift shop, as I would like to see the change! Another big change from our first trip is that the original main pool that my dad and I spent tons of time in has also been overhauled.

Our dining choices in 2014 will be somewhat different than the choices in 1991…In 1991, the big dinner we did was the Mickey Mouse Luau at the Polynesian Resort. We ate family style, watched dancers and learned the hula. Have to admit, my mom will not be partaking in this again, but we do have our own special dinner booked at Victoria & Alberts and Narcooses, both found at the adjacent Grand Floridan Resort & Spa. 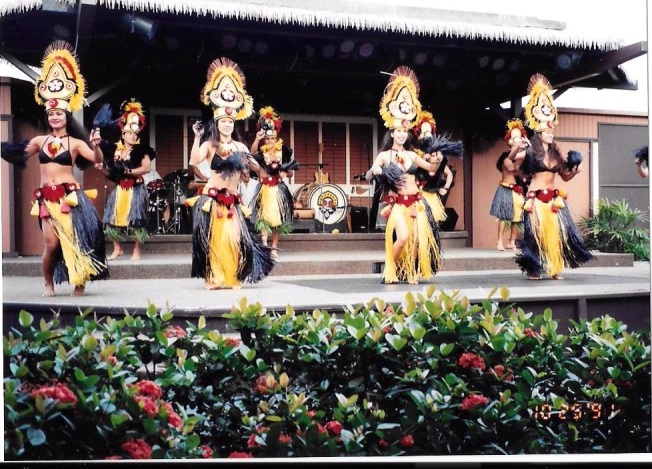 We both cannot wait to experience this resort for the second time. It really puts a gold seal on our “Disney Passport” as we have now gone full-circle, so to speak…back where it all began!