So I am doing my race reports a bit out of order. I’m also behind on them, so something is better than nothing! While my next report up is the Disneyland Half Marathon Weekend, I haven’t finished looking through all the unidentified photos on MarathonFoto to see if I can find more of me. I want to wait until I have those photos to do that recap. So up next is my Spartan Race weekend up in Red Deer, Alberta, which took place on Friday, September 11th-Sunday, September 13th. During these three days, I participated in 3 events: The Hurricane Heat, Spartan Super and Spartan Sprint. This recap will cover all three events, and while I’ll try to be concise, I’m sure this post will get pretty long! Be forewarned!

I headed up to Red Deer Immediately after work Friday, which I knew would get me in town right on time for the Hurricane Heat. The Hurricane Heat is a Spartan event I had not yet participated in. While I had signed up for the Saturday and Sunday events I think way back in December, this Friday night event I did not register for until end of August. What is a Hurricane Heat? Well, it’s a 3-4 hour “boot-camp” style group workout, where you work as a team, in smaller groups, as pairs, and on your own. It began in August 2011 when Hurricane Irene forced Spartan Race to cancel their Sunday event in Amesbury, Massachusetts. The founder, Joe De Sena, got a bunch of Spartans together the Saturday morning and did basically whatever the hell he felt like. And now the Hurricane Heat happens the night before many Spartan Race events. Whoever runs the Hurricane Heat decides what tasks the group partake in, some heats run the whole course for the weekend events, and some run parts. The great thing is that every Hurricane Heat could be different! 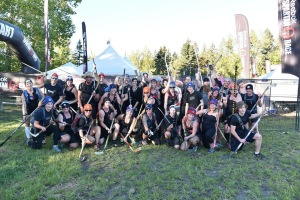 John Bouwman of JohnnyB FITT led the Hurricane Heat. He did a fantastic job. I don’t remember how many of these he said he led before, but I know he has pushed Spartan Canada to let him lead them, as otherwise only the U.S. Races regularly hold the heat. We had received an email about a week prior to the event with a list of items we needed to bring with us. Listed were: hydration pack, headlamp, 2 chemlights, NHL toque, salt/electrolyte packets, energy or gel shots, 5 zip ties, a regulation length hockey stick, a 500 word essay on Why I Race, and to wear all black. We also were told to arrive by 5:30 pm. I took this list seriously, as I had read online that if you didn’t have items you may be penalized. I wish John had been harder on the people who didn’t come prepared, because those were the people at the event that slightly irritated me. I mean, if it says to bring a hydration pack and you show up to this event without one, you look like an idiot. Maybe it sounds cruel for me to say they should have been punished with burpees, but that is what I was expecting. There were a handful of people at this heat who, in my opinion, didn’t have a clue what they were getting themselves into. But, each to their own I guess.
We started with splitting up into teams. John picked me as a team captain (he picked people with a Montreal Canadiens hat on) and I got to pick one person to be on my team, and then we had to all split up evenly in a set amount of time. A lot of the evening would be spent with John giving us a somewhat simple task, and if we didn’t complete it fast enough we would do burpee penalties. Like, when we had to take our hockey sticks and clear a path through the weeds and brush from the race site to the shower site so people could walk there the following day. Wasn’t done well enough so we had to do burpees and then try again.
The evening went on for a little over 3 hours. It included running to different obstacles (we did the course partly in reverse) and then completing some of these obstacles. At one point, we zip tied our wrists to a partner and had to get over the 8 foot wall tied up! We also all helped organize the Tire Flip obstacle and the Stairway to Sparta. Near the end of the night, we even did a little swim in the creek before heading back to base with our head lamps and glow sticks. Upon finishing, we were all presented with our Hurricane Heat Dog Tag, a shirt (I ended up giving mine to my husband because I wasn’t fast enough to get a size small) and the honour of being part of class HHI-005! As someone who has done now a dozen Spartan Races of various distances, being able to participate in the Hurricane Heat was a great opportunity. Since I knew I wasn’t going to be doing the Saturday and Sunday events for time, just completion, and since I knew what the terrain was like in Red Deer, I knew doing this event on Friday night wouldn’t completely waste me. If you haven’t done a Hurricane Heat and have done a ton of Spartan Races, I would highly suggest registering for one!

So Saturday morning came around and I was up at my normal school day alarm of 6 am. I had the 8:30 Super Spartan heat time to be at, and I wanted to make sure I arrived with plenty of time to park, warm up, and check my surroundings. My in-laws house is only a ten minute drive from the site of the event, Heritage Ranch, so it’s a super convenient location! I parked close by in a neighborhood, which was worth it by morning end (more on that later). My heat started right on time and I positioned myself near the front, as I knew I wanted to be ahead of the masses as we approached the first obstacles (over-under-through, hay bales, and 8 foot wall). If you get stuck in a mosh of people initially you end up waiting at obstacles. So since running is my strong point, I made a point to stay ahead!

Red Deer Spartan Races are, in my opinion, a “runners race” more so than other Spartan courses. There is a lot of single track trails through the woods and then wide open areas of cross country running. If you are a strong runner, you can take advantage of these areas and just cruise from obstacle to obstacle. There were many sections on Saturday (and Sunday) that I was solo as I would go slow through an obstacle but then get a good pace going through the woods. 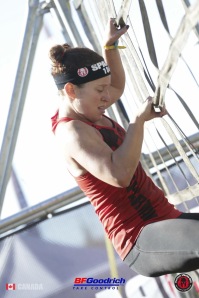 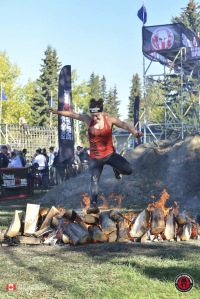 I am most proud of being able to do the monkey bars all by myself on Saturday (and Sunday!) I didn’t hit the spear throw, so now I still have only made the spear once in all my races. The course for Saturday was 14 kilometers of fun, and I am so happy I had an early heat as it started to really warm up later. I would not have been able to run as well as I did if I had been later in the day. I finished in a time of 1:42.14, which was 327/2327 overall, 24/1008 females, and 8/222 in the F 30-34 age group in the Open category. Oh, and that parking spot? Came in handy because as I walked back to my car to change before heading to the beer garden (which didn’t have a free beer for us, even though a coupon was accidentally enclosed in everyone’s packs on Saturday…apparently Spartan Canada couldn’t secure a beer sponsor this year so no free beer!) a dad and his kids had a lemonade stand set up. And a sign offering a hot shower for $3! I inquired and I went and rinsed off on their patio with the hot water hose, and then his wife led me to a change area set up in their mud room. The hot shower, lemonade and tip put me back $8, and it was worth every penny! 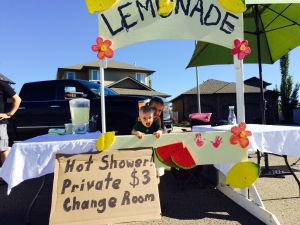 So I’ll keep Sunday’s recap short, as the course was just a shorter version of the Saturday’s (approximately 5km). I woke up sore…and hungover. Saturday night consisted of hanging out with my sister in law and drinking a bunch of vodka club sodas. I got her to say she would come sign up for the race morning of, but she slept through it. When my 6 am alarm went off, I was facedown on the couch in their basement. Oof, I just needed to get through this day. I needed this race under my belt because then I would be just one step away from my Double Trifecta, which will be earned in Sun Peaks after completion of the Ultra Beast. I again had the first open heat at 8:30, so getting the race started right away and over early was great. It was surprisingly a lot less busy Sunday morning. I guess I had expected more people to show up for the shorter distance race, but I think a lot of people in Alberta had participated in the Calgary Sprint in August, so if they were going for a trifecta this race was not needed for them.

I just went through the motions of this race, as I just wanted to be done with it. I ran hard in the stretches where running was possible, and I strongly believe that is what helped me place well in this event. I finished in a time of 55:53, and ranked 145/1352 overall, 22/724 in female and 5/157 for 30-34. I collected my medal (both the super and sprint medals had a special Canadian band on them) and another shirt (size small men’s, but I was able to shrink it as it was cotton. The super shirt was an XS small dri-fit men’s, which I’m not sure I’ll wear much). I made my way back to my in-laws, showered, packed, and hit the road back to Lethbridge by 11 am. I wanted to nap so bad, but I also just wanted to get home. Upon arriving home, I collapsed for a solid two hours before unpacking.

So the weekend was a huge success! I participated in three Spartan events (Hurricane Heat, Super and Sprint) and spent around 5+ hours doing it in total. The somewhat funny thing is that when I compete in the Sun Peaks Ultra Beast in one week I will be running for longer than that all in one day. The Ultra Beast will be a fantastic way to cap off my 2015 Spartan Race season! 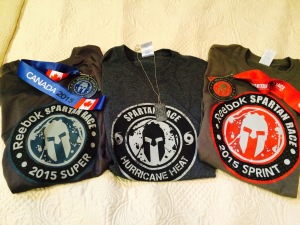