My training for Boston Marathon has been winding down, and with about a week and a half to go, I still had a 10-12 mile workout to deal with.  I decided to register for the local 10 Mile Road Race (which I have done two other times, here in 2013 and here in 2014) and push myself to the max.  While some people training for a big race like Boston, or any marathon at that, may not want to push themselves all out in an event less than two weeks prior, I needed this.  I need the competition, the motivation, and the chance to see how my foot held up.  In the end, I am so happy I did!

Weather was close to ideal race morning-a slight chill in the air, but warm enough to wear a singlet and shorts when race time came.  I had warmed up and was set to go when I took off my warm up gear, put it in my car, and then locked the doors…..along with my keys.  CRAP!  Well, that would have to be dealt with after, as my husband was out of town, had the extra key, so my only solution would be to borrow a phone and call AMA (spoiler alert-borrowed the phone and they promptly came and helped!)

I really had no idea how my splits were going to be, I was just going to push until I needed to pull back.  Ideally, my goal was to make sure to beat my time from two years ago; 1:14.49.  I knew I was faster and stronger than two years ago, so I knew I could do it.  I also really wanted to place in top 3 females, so I could earn some prize money to take to Boston.

Race began and I started strong for first three miles.  Very strong, and very concerned.  Was I going too fast?  I was trying to just keep with a group, as it seemed like myself and another woman were the natural ‘break’ before a big gap behind.  I didn’t want to be running solo during this thing.  The course is out and back on Scenic Drive, down to the river bottom, turn around at the bridge, and back.  So it is a very downhill course for the first portion, then a stupid climb back up Lynx to get on Scenic for the last 2.5 miles.  My first four miles (which include the steep downhill into the river bottom) 6:53, 7:03, 6:53, 6:44.

At this point I was 2nd female, with the 1st female quite a bit ahead.  She was ahead of my friend Bob and I knew unless she had a total collapse I probably couldn’t catch her, but second place was my spot to lose.  I had some extra energy sent my way when I passed my colleague and co-coach from Cross country, Don, and two students, who had ridden their bikes to the river bottom to cheer on the runners.  I got to see them again after the turnaround and it helped tons.  My splits in the river bottom were 7:11 and 7:20.

At this point I had been approaching the 250 feet + elevation climb of Lynx.  I have not been doing enough hill training, and I felt slower up this hill than I have in the past.  I knew I needed to keep pushing and hold my position, so even if I slowed down I didn’t want to walk.  I knew the splits would be much slower, but I wanted to have energy for the last miles on Scenic.  I hit miles 7 and 8 in 8:08 and 8:14.

By the time I made it back on to Scenic it did feel like I was running solo on a training run, albeit A LOT faster.  Big gaps between individuals.  It helped catching up to some of the participants in the 4 mile portion of the event who were walking, as it gave me people to focus on.  The volunteers at the cross walks also helped me keep on moving.  I ran mile 9 in 7:28 and then finished mile 10 in a strong 7:05.  My final time—1:12.59!  I held on to 2nd place female, beat my time from two years ago, and even snuck in to the 1:12s! 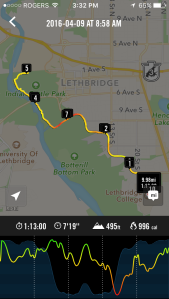 Route from my Nike Plus watch

After finishing, I felt great.  I was not ready to collapse, and felt like I could have done three more miles.  Which would have been a half marathon.  And then potentially a personal best.  Have I been doubting my speed and ability and not really pushing myself to my full potential?  How fast should I be going at Boston?  My foot isn’t really holding me back, its my mind!

Awards were great, because I truly love being around my running family in Lethbridge!  They presented 4 mile awards first then the 10 mile.  For being 2nd female I was awarded with $150 cash and a hug from the Lethbridge College Kodiak!  Age group awards put me in 1st for 30-39.  By the end of the awards, I had gotten the pictures I wanted, my car unlocked, and my confidence boosted.  Boston, here I come! 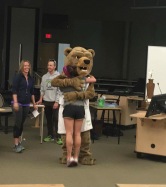 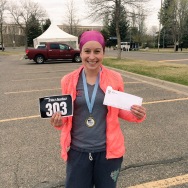