So, my Boston post isn’t going to be one giant mess, I promise.  I have decided to break my own recaps on this amazing trip into four posts-Friday, Saturday, Sunday and Monday.  That way I can better highlight each day! 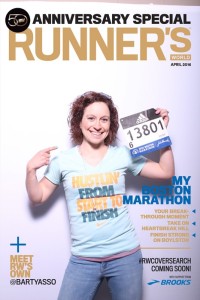 Friday was one long day, and actually a continuation of Thursday…we flew out of Calgary at just after midnight, connected through Toronto, and arrive in Boston at around 8:30 am. After figuring out transit pretty well (only one small fail, which then led to a one mile walk to our hotel with our suitcases in tow…this happened to Dan and I in Quebec City too…hm) we unpacked, changed and headed downtown to the Hynes Convention Centre for the expo.  Before entering the expo, I decided we should take the time to walk down Boylston to see the finish line set up, which was getting finishing touches as we made our way to it. 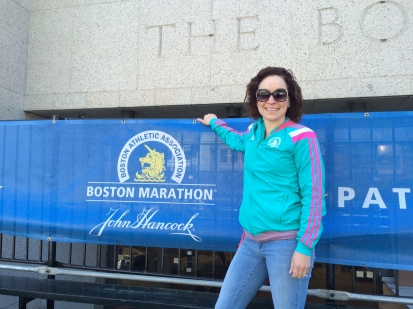 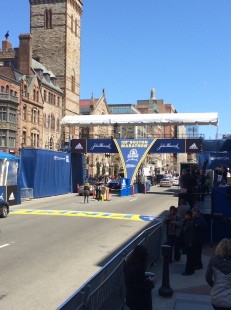 As we looped back down Boylston, we came across the Adidas RunBase store.  This store is relatively new, and is the official store of the B.A.A (Boston Athletic Association).  I ended up buying a nice store shirt for $25 and a black/neon pink/teal headband for $16.  They also had some cool signage that explained the meaning of the unicorn logo among other things! 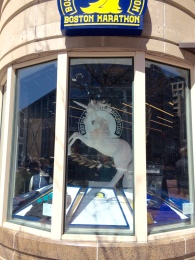 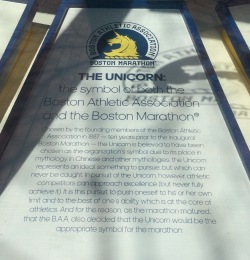 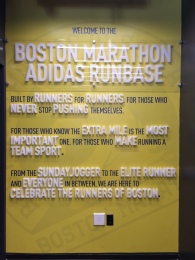 Entering in the convention centre was something else.  You could tell from that very moment that “YES  THESE PEOPLE HAVE ORGANIZED THIS EVENT BEFORE.”  My husband even realized that as we made our way to packet pickup, as there were volunteers and security at every possibly corner directing us.  There was no possible way to get lost.  The pickup process went so fast and so smooth.  I had my bib!  My lucky ticket!  We then made our way back downstairs to the expo floor.  I knew Dan was just going to follow me aimlessly as I walked the aisles looking for nothing in particular.  This is when I eventually got my Runner’s World ‘cover shot’ done.  As you can see, I am wearing my go-to shirt that I wear on expo day to a lot of my races!  I love wearing the Nike “Hustlin’ From Start to Finish‘ shirt!  I think it says everything I need to say!  Before getting this photo done I was able to stop and meet Runner’s Worlds very own Bart Yasso…the man behind the menacing Yasso 800 workouts.  We had a nice chat, and he even spoke highly about the city of Lethbridge, where I live!  He had been there a few years back and had the opportunity to run in our famed Coulees, and raved about it! 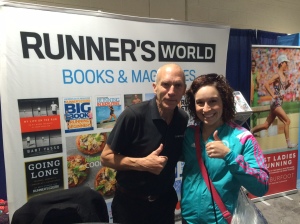 The expo was massive.  It was hard to actually gauge how large it was, as the ceilings were rather low, unlike when I attended Chicago in 2006.  In Chicago, the convention centre ceiling was quite high so you could see how many booths there were and it was a more natural looping through the exhibits.  I was scared I would miss something as we walked through.  I picked up some freebies here and there, and even bought a couple little things.  My big purchases were made prior to arriving, as I had already pre-ordered my Adidas jacket along with some other long sleeve shirts and shorts.  We even managed to find a Samuel Adams booth where we got to sample their 26.2 brew.  I have to say, I really liked it!  I tend to lean toward more of the IPA-style beers, and never expect much from a beer with lower alcohol percentage, but this was a good brew!  I had it lots over the course of the trip! 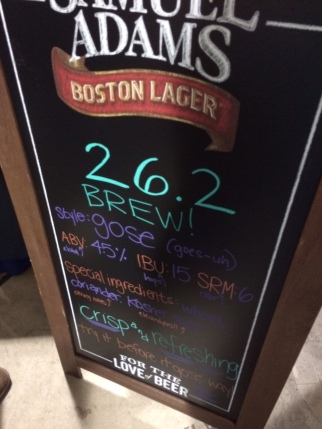 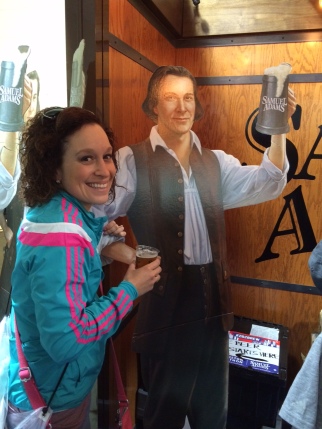 By this point in the afternoon, the fact I hadn’t really slept on the plane hadn’t settled in yet.  We made our way down to the Fenway Park area where we went to a couple pubs, most notably the famed “Cask & Flagon.”  This is where I had my first cup of Clam Chowder during the trip.  (I ended up having four!) 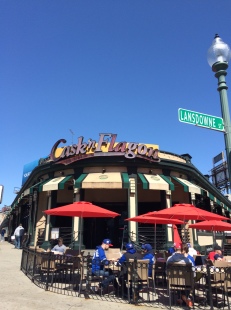 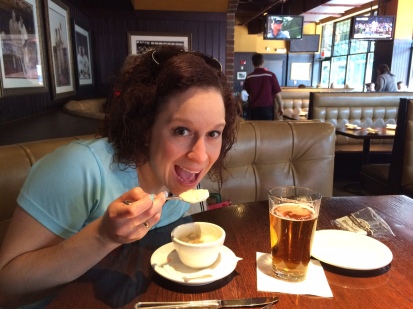 After checking out another nearby bar, Jerry Remy’s, we made the trek back to the hotel so I could dump my stash of goodies.  We had an hour left in us, as it was still light out, and after making it back from a little tour of the Brookline neighborhood (where our hotel was located) we hit the sheets pretty early.  Dare I say Dan was snoring by 9:01 PM and I followed closely by 9:30 pm.  An action packed day for sure!  And Saturday had an early alarm coming up, as we would be running in the 8 am B.A.A. 5 km even the next morning in Boston Common!  Rest was needed!  More to come…..! 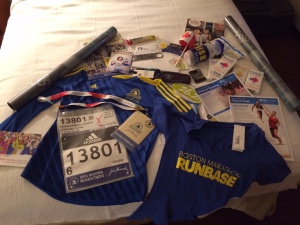 The swag acquired from the day!