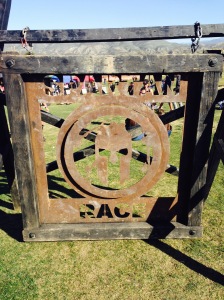 I am still not fully recovered from my whirlwind weekend in Southern California.  I flew out at 7 pm on Friday, and then was back at LAX on Sunday by 3:30 pm.  I drove home and got into my bed by 3 AM Monday morning in Lethbridge.  I am tired, my body is tight, I had chaffing marks on my ankles from my calf sleeves, my eyes hurt, I am sunburned, and my number is still etched into my calves with permanent marker.  But I wouldn’t have it any other way.

This weekend I ran the Spartan Race So Cal events-Super Spartan (9 miles) on Saturday, Jan. 24th, and the Sprint (approx. 5 miles) on Sunday, Jan. 25th.  Both events were held at Vail Lake in Temecula, California.  My best friend Ali, her boyfriend, and their dogs picked me up from the airport and we headed to Temecula on Friday night.  We were at the race site nice and early for check in and to peruse the site.  I also spent a lot of money on merchandise!  I would run the Super with Ali and Kevin.  This would be Ali and Kevin’s TRIFECTA race weekend (completed the Beast the weekend before, a distance of a half marathon).  Heading out at the start of the race, I didn’t think the wind would be to bad, seeing that I am used to Lethbridge winds.  I was wrong.  These winds were just as strong at winds in Lethbridge, but add the gritty sand and dirt from the course blowing around and the sun, and that makes it a whole different experience.

I enjoyed all the obstacles on the course—some that are the same as previous years’, and many that are new.  Seeing that this is my 3rd year doing Spartan Races it is appreciated that they change things up.  Like the Traverse Wall—while they still had one, instead of this one going in a straight line, it now zig-zagged.  The terrain of Vail Lake also just added new natural obstacles that reminded me of the Montana Sprint.  Ali and I finished this race together in a time of 4:40.06.  I know I have said this before, but considering this girl wouldn’t even run 900 metres last year at this time and was now doing 9 mile obstacle course races is amazing!  I am so proud! 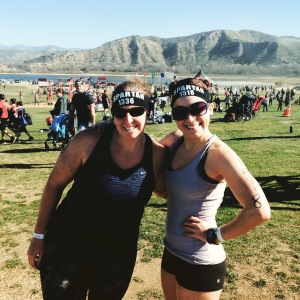 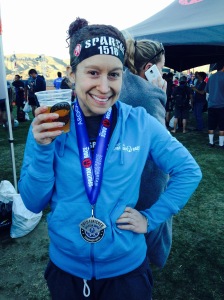 That night I realized when we went in the hot tub how sunburned and wind burned my thighs had gotten.  It stung like HELL getting in the hot water.  Whoops. That being said, I still decided to go out and push myself during the Sprint.  Seeing a preview of the course the day before was a huge help, and I was able to tackle those hills just like I would if I were in the Coulees in Lethbridge.  I even nailed the Spear Throw obstacle!— a Spartan Race FIRST for me, and this was my 9th Spartan Race ever!  I still move quite slow over any height obstacle, as my fear sets in, but I made them.  I fell on the Monkey Bars, Rope Climb and also made it 3/4 of the way on the Traverse Wall….so 90 burpees for me.  Even with those burpee penalties, I finished in a 1:21.52, which was good for 33/1655 females in the Open Division!  My running came in handy for my lack of upper body strength! 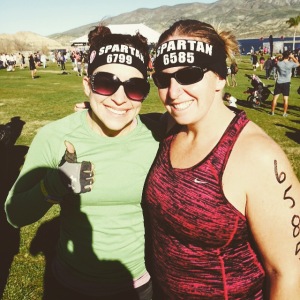 I knew what to expect coming into a Spartan Race, but I am very happy to say that I feel the organization is back bigger and better in 2015.  The obstacles did not disappoint, the race swag was new and improved (finisher shirts that are specific for each distance, instead of a general shirt!), and incredible medals!  I am very excited for my Spartan Beast in Montana this May so I can become a member of the USA Trifecta Tribe!  AROO, AROO, AROO!!!! 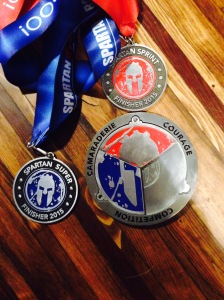 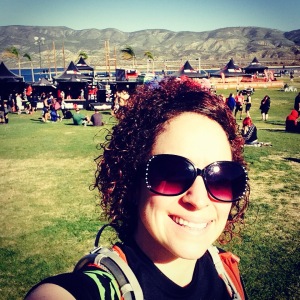 My husband and I headed up to his old stomping grounds of Red Deer, Alberta, on Friday, September 6th, for the Red Deer Super Spartan which would be held the following day. The weather report was grim—-rain, showers, clouds, unseasonably cool weather. As we drove from Lethbridge to Red Deer, we could see the clouds making faces at us, and the lovely downpour that greeted us between Airdrie and Red Deer made us a tad concerned how we would fair the next day.

We headed out to Heritage Ranch at 8 am Saturday morning. I have ran near here during the Red Deer Half Marathon, but never through all the horse trails. Heritage Ranch was a short 10 minute drive from Dan’s parents’ place, and it is quite an odd location—-we came in through a newer neighborhood and parked on the street, walked to where the check-in would be and it was all RIGHT THERE. Imagine if you looked out your bedroom window and you saw half-naked, spandex-clad soon-to-be-muddy people, heard ridiculously loud belongs-at-a-crossfire-gym music, and witnessed mass confusion of mobs of people at package pickup….that was the Red Deer Super Spartan at 8:20 am.

Dan and I had never been to a Spartan this early in the morning, and the area was so congested that it didn’t help the situation. We met up with his cousin Erin and us three waited in line for about 25 solid minutes. Some times it was very frustrating as you saw volunteers not being able to check people in or find their names….there was no packet pickup offered the night before so I think that was most of the issue. Once we had our bibs and packages, the rest was pretty smooth. We took turns going to the marking station to get our number put on us in marker, while the others held line for bag check….got to use the porta potty once…check out the finish line area (where they put the rope climb as basically the LAST obstacle! Ugh!) and then it was only ten minutes until our 9:30 start! 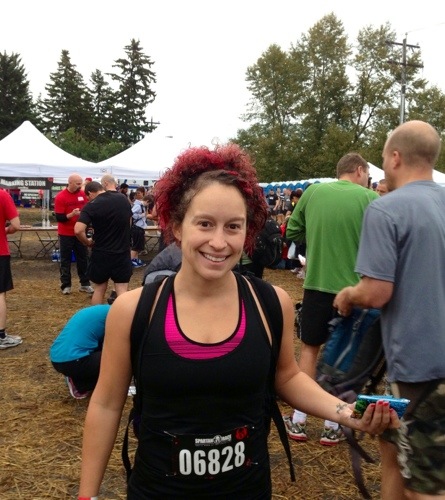 Because of how Heritage Ranch is set up, you literally could only see the start and finish area of the course, and you had no clue what to expect on the course. When the countdown finished and we set off, we barreled through some very narrow horse trails. Some of the first obstacles we hit were the over/under/through wall, stacked bales of hay that we had to crawl over, buckets of soil we had to load and carry, and even some naturally occurring horse poop!

My biggest achievement in this race was finally being able to complete the monkey bars. My last two Spartan races I slipped off almost immediately, and pretty much psyched myself out of being able to do it. Since Dan scurried across real quick, Erin and I stood there a moment before starting. Erin is not tons taller than myself, but her arm span is ridiculous. She started and got her momentum and went three bars at a time! I started and was just doing one at a time, but once I saw her ahead doing the three, I got some momentum myself and double-barred it to the end. I was so pumped when I jumped off it just fired me up!

The trail running was challenging, but having Erin be our leader most of the race was really helpful. She thrives during trail races and is used to running with the exposed roots, rocks, uneven surface. You couldn’t see any obstacles from inside the thick covering of trees so every time you spilled out of the woods, you were greeted with a surprise. One of the surprises was not just muddy water to walk through, but a 40 foot body of water we had to swim across, which I would describe as a cross between a creek and a small river. It was fairly calm, but the idea of not having your feet be able to touch the bottom was new! They did have life jacket provided if someone needed it. Dan opted to use a regular front stroke, while I just doggy-paddled across. Erin got a little freaked out once submerged, but then made her way over.

Sooner than we expected, we had reached the finishing obstacle area. The mud wall to climb over was extra tough this time due to the ropes being absolutely covered in sludge. Erin and I both had to do burpees at the rope climb, so when Dan finished it successfully, he told him to finish ahead of us. He did not have to do burpees as an obstacle punishment at all this course, which is a first, since he usually fails the spear throw. Erin and I finished together with a jump over the fire, finishing with a time of 1:27:46, covering a distance of 13km!

We really enjoyed this course, and had a fantastic time running it. The longer distance was an advantage for me over Dan, since 13km is a normal distance for me to run. This allowed there to be larger spaces and breaks in between obstacles, so I was able to get into a good stride multiple times. So what is next? Well…Erin and I are 99% sure we are registering for the Spartan Beast in Sun Peaks, BC, on September 28th. We have gotten addicted…some may say we have drank the kool-aid—and upon completion of the Beast, I would join the Trifecta Tribe. Have I gone batshit crazy yet? Maybe. But I am having the time of my life!