The 2nd running of the Lakeview School Superhero 2km and 5km race occured on Wednesday, May 10th.  I participated in the event last year, which was started as a fundraiser for their new playground.  You can read about last year’s run here.  This post also had some other May recaps in it, which are interesting to look back at!  Crazy how things change in a year!

My husband and I both ran in the 5km event this year.  They had the 5km runners begin before the 2km event this year, which was a welcomed change from last year’s order.  I had just made it ‘public’ that I was pregnant, so I was at ease knowing my slower pace was warranted.  I know, I shouldn’t care what people think…but it’s a runner’s mentality.

It was very busy at the start of the race.  This wasn’t necessarily due to the amount of runners in the 5km, but all the families waiting around for their children to do the 2km.  With all the 2km participants, the number of spectators was ridiculous.  I was happy for the race to start and get away from the chaos of strollers and families.  The route takes you from Lakeview School to Henderson Lake, and you loop over the bridge by the concessions area and head back to the school.  I started off strong, but knew I should probably take it back a bit.  My first mile was an 8:02.

As I got into the park, I could see the lead bicyclist.  And my husband….right behind them!  It was very exciting to see Dan in the lead.  He was able to hold this lead the rest of the race and he finished 1st overall with a time of 20:28 (Which beat my own 5km personal best…I’m not mad…really).  By mile 2 I had slowed down considerably.  It was a bit humid out and it was getting to me.  I was also watching my heart rate and wanted it to lower some.  I ran an 8:39 for that mile. 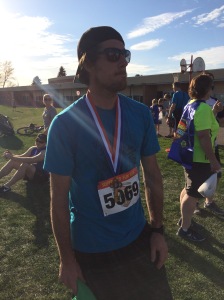 This was a great little local event and if they keep having it each year I will keep supporting it!