In my final post regarding the Star Wars Race Weekend, I will finally talk about the Half Marathon.  In case you aren’t familiar with the RunDisney race weekends, they have all sort of evolved to having a “Challenge” option.  With exception to Marathon Weekend in January, every other race weekend has an option to sign up for both the 10km on Saturday and the Half Marathon on Sunday. (Marathon Weekend goes one step further and has the Dopey Challenge where you do the 5km, 10km, half and full….I did this in 2014 and that was my driving force for fundraising in memory of my late father)

Dan and I were both signed up for the Dark Order Challenge, so in addition to the 10km we completed on Saturday we would be running in a half marathon on Sunday.  We went to bed at a reasonable time Saturday night and then participated in a Groundhog Day style moment Sunday moment where I got up at 2:30 am to pump and we got ready and headed to the transportation to race start.

I did want to make sure we got closer to the front of our corral than we were for the 10km, so that meant we weren’t going to waste time wandering slowly in the open areas.  We walked all the way to the back portion of the staging area to use the farthest porta potties and then went to the holding pen for Corral A.  They eventually moved Corral A into the starting gate and we were only a few rows back from the very front.  Nice!

Waiting around is kind of boring at any race, so at least at a Disney race they have announcers, video footage, and characters to help pass the time.  Again, I am not a Star Wars fan.  I am not against it, or hate it, I just don’t know anything about it.  What I learned while standing there watching different trailers for new movies and highlights from old movies is that 1.) Good guys have blue and green light sabres and 2.) bad guys have red light sabres.   Am I right?

I knew this would be interesting because this would be the first Disney race challenge that I would try and ‘race’ back-to-back events.  I usually will race one of them, and take the other easy.  For instance, in 2015 I raced the Disneyland 10km and then for the half marathon I ran with Ali pacing her to a personal best.  Really, that’s the smart thing to do.  But I wanted to push.  Dan agreed to run along with me this race so at least I’d have him by my side.  Race started and off we went!

I knew the first miles of the course were technically just like the portion of the full marathon from after the monorail hotels.  But this would be different because at 5:30 am it would still be dark.  I was nervous it would be as boring as the previous days’ 10km, but both Dan and I were pleased the the first couple miles that were heavily tree-lined also had lots of lights, music, sound effects and photo stops on the side.  We weren’t stopping for any photos but it is still nice to see these up ahead and to look at them as you run by.

By the time we got to Animal Kingdom, we were getting warm.  The humidity was bothering me more today than Saturday, and I am not sure if it was more humid even or if it was just the fact that I knew I had more miles ahead of me than I did the day prior.  I tried not to think about it when we ran through Animal Kingdom, and I actually forgot about it briefly when Dan and I had some man draft behind us for about a mile who had the most annoying breathing pattern.  I kept trying to speed up to lose him but he kept creeping behind us and right between us.  GO AWAY!!!!  I eventually slowed a tad just to let this guy through because I was ready to lose my shit.  This was at about the time we were running through Pandora so I didn’t really get to take in all the scenery as I was just annoyed with this man. If anyone knows the man in the photo below between Dan and I, please let him know he should not sidle up to others. Thanks. 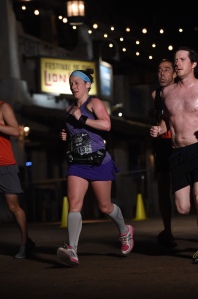 We made our way out of Animal Kingdom by way of Dinoland and hit an aid station.  Dan and I were so thirsty that we decided to powerwalk through the aid station to drink Powerade and dump water on ourselves.  Did I mention it was humid?  Shortly after this aid station we made a joint decision:  we would walk through every aid station and pound Powerade and dump water.  It would be needed for survival.  Ultimately, I am glad we did this even though I know our time was slower because of the walking.  But if we hadn’t, the final time may have been even worse because we would have been piles of crap.

Also as we left Animal Kingdom I did an unheard of thing for myself: I took my tanktop off and ran in my sports bra.  I may wear revealing bikinis on the beach, but when I work out or run or do yard work I do not like just being in a sports bra and shorts.  Just not my thing.  But again….the humidity was terrible.  Dan encouraged me to do this, as he had already taken his top off and felt better immediately after doing so.  I will admit it did feel great to get the top off.  I didn’t ditch the top, as it is one of my favorite LuluLemon tops, so I wrapped it around my water belt.

After making the decision to take it easy through the aid stations and shed my shirt, Dan and I both relaxed and had a lot of fun!  We still tried to keep up a good pace, but my legs were getting pretty tired, most likely due to the 10km from the previous day.  We were also getting hungry!  I think our early 5pm dinner the night before, the smaller breakfast that morning, and my pumping before the race all played into my hunger pains.  The Powerade provided some liquid calories and sugars to keep us ‘up’ and then when we got to the food station we both took two packs of the Sport Beans to eat.  We needed fuel bad!  Once we got to Hollywood Studios, however, I knew we could both muster the necessary energy needed in order to finish strong.

While we didn’t stop for any photo stops, we did get lots of great Photopass picutres taken of us.  During the food station I actually took some time to get my race bib off of my sweaty, wet tank top and put onto my water belt.  This was important because your race number IDs you for the photos!  Since my mom is an annual passmember she gets Photopass included and she could register our race bibs on her account.  So ‘free photos’ if you want to use that term loosely! 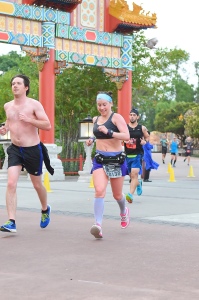 We finished the race with an official time of 1:50.35.  Dan’s time did not show up on RunDisney and I am thinking it is because he ruined the timing chip on his bib the night before.  After running the 10km, he took his shirt and wrung it out because it was soaked, completely crumpling his bib.  I pointed out he needed to use it the next day and the look on his face was so crushed.  Our splits were as follows (and for the record my watch recorded the distance to be 13.3 miles.  I glanced at my watch when it hit the 13.1 and the time was around 1:49.14)

I don’t know when the next RunDisney race weekend that we attend will be, but I know this won’t be the last!  We really did enjoy ourselves, from the well-planned out expo, to me running beyond my goal time in the 10km, to us running together as husband & wife in the half!  You don’t necessarily need to be a ‘fan’ of the race theme to have a great time at the race weekend!

Note: I have extra medals compared to Dan because I had registered for the Kessel Run Challenge in addition to the Dark Order Challenge.  This meant I did the Start Wars Virtual Half Marathon at home, earned that medal, PLUS the Kessel Run medal at the completion of this race.  RunDisney sure knows how to take my money….bling bling.