Earlier in the summer I had the idea come in my head that I wanted maternity photos done. I knew I didn’t want stereotypical maternity pictures taken (heart over the belly, weird and awkward posing). What I wanted was some nice photos of my husband and I, some solo pictures of myself, and then photos with Snoopy. I think my desire to have these photos done increased as Snoopy was having trouble in June, and I knew I wanted to capture moments with him in case he took a turn for the worse.

I contacted a former student of mine, Emmy Burton.  Emmy is a very talented photographer!  I knew I wanted her to take our photos.  While she had not yet done a maternity photo shoot, she had done many family portraits and grad photos…so I just told her it would like that. Not to worry about the enormous belly!

I gave her my ideas about what I wanted in my photos and where I’d like them to be—west side Lethbridge by the bridge. But not down in the river bottom like everyone else’s; I wanted them above the Oldman River at eye level to the bridge.  Oh, and I wanted a train to be coming by…..

Our date for photos was September 2nd. A lot of British Columbia and Alberta have been having trouble with wildfires this summer due to extremely dry conditions.  About a week before our photos, lightning struck in BC and the Kenow wildfire started.  The smoke had begun to loom across the mountains into Southern Alberta, and that afternoon it really hit us bad.  She asked if we wanted to reschedule but I figured we should just go ahead and see how they turn out.

And I’m so glad we went for it!

In my opinion, the smoke added this natural filter that just adds to the photos!  Emmy got us set up quickly and started taking photos right away. And at one point early on, Dan looked to the west, pointed and yelled “TRAIN!!!!!” 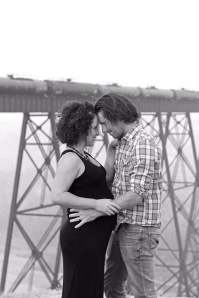 My train came!  We got a few photos as the train headed across the High Level Bridge to east Lethbridge.  After the train passes, we continued with the photo shoot getting some great shots of Dan and I, and then with me and Snoopy. 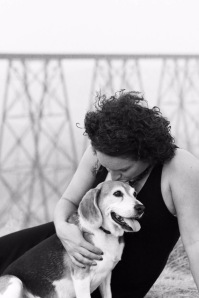 Emmy took the photos home and within a week she got us the edited digital files. We are so happy with the photographs and will cherish them forever!  I encourage you to check out and follow Emmy’s Instagram page with her photography @lemonhurricane If you’re in the area and looking for someone to capture a special moment, consider contacting Emmy!