So, summer 2016 is not going to be one filled with race recaps and training runs.  It’s going to be filled with recuperating and slowly getting back into hopefully doing a 5km by end of August.  On June 10th, I had surgery on my right foot.  It’s been five days since then, and I wanted to write a quick post on how things are going, and what I have ahead.

Up at 5 am, out of the house at 5:30 am.  But wait, don’t you live three blocks from Chinook Regional Hospital Andrea?  Why do you have to leave so early for a 6:30 arrival?  Oh yeah, all podiatry surgeries apparently happen in Cardston. (My husband at 5:15 am-“What bumfuck town do we have to drive to again?”)  I had never been to the Cardston Hospital, and when we arrived it was sort of entertaining, as the lot was the size of an elementary school parking lot, yet completely empty.  We went through the main entrance…only people in the check-in area other than the bored security guard.  Got sent upstairs to check in to my room.  It was silent up there.  Kind of eerie.  Within that hour, I had a nurse come in to start an IV, which took two painful pokes.  He said my skin was tough and didn’t want to take the needle…reminded the nurse of the Hutterite farmers….yeah, he said that.  My tan, leathery skin was just pointed out.  About an hour and a half in the room was all I needed, and they whisked me away to get ready for surgery.  Dr. Williams and the anesthesiologist met me in the hall to go through exactly what he would be doing.  First, I straight up said I wanted general, not spinal.  I did not want to be awake during this.  Then, Dr.  Williams looked at my foot, talked about where the incision would be, that they would shave down the bone spur, etc, etc (a cheilectomy is the official term)….and then he questioned why we weren’t doing anything about my bunion today.  Well, why aren’t we?  I am getting put under, so do it all now.  He disappeared to reassess the x-ray, came back, and had me sign off on that they would also fix my bunion.  It would be through the same incision, but there would be some cutting and moving of the bone to straighten it out, a few tiny screws in the side, and voila!  I was soon brought in to the surgery room, where I breathed into an oxygen mask a few times, saw them put a brace around my foot, and then I was out. 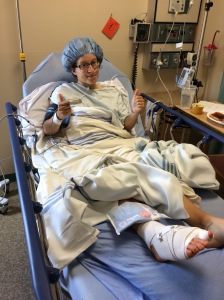 When I woke up, everything that went on in Cardston was blurry.  Dan said the doctor came and talked to him about what they exactly did, and that they ended up doing even more than they initially planned.  Bone spur was shaved, bunion was fixed, but he was surprised at how much arthritis was actually in my foot.  And, they found a piece of bone (about the size of half a tic tac) just floating around in my foot.  So they dug that out, put it in a jar, and gave it to me as a souvenir.  Once I drank some water, ate some food and was able to use the washroom, we were headed back home.

The rest of the day was spent taking my pain meds on time (I was prescribed Tramadol and Ketorolac), watching all the tv I had dvr’d and napping.  I wasn’t really feeling much pain, but I didn’t sleep more than 2 hours at a time.  This happened throughout the night, as I did want to take all my pills every 4 or 6 hours as prescribed.

I was awake and moving by 7:30 am, and I felt amazingly well.  Of course, this would nose dive later in the day.  I hobbled around in my medical boot, ate some breakfast, changed clothes.  I even did my hair and went outside to look at the work Dan had done so far in preparing the roof top patio.  Since I was going to need some “supervision” the next couple days, Dan was going to stay at home and work on our rooftop patio.  If I needed him, I could just call his cell phone and he would be there.

I made the mistake of thinking I was a hero and that I could hobble around in the yard and fill the bird feeders.  I also decided to go chat it up with “old man Dwayne” next door, and then I even cut some dill from our herb garden and brought it to our neighbor Darcee.  I felt like a million bucks!  Then, I went in the house and laid on the couch, took of the shoe, and saw some blood on my big toe area.  SHIT.  It was at this time that on cue my doctor called to see how I was doing.  He said that I was probably still feeling the effects of the hospital drugs, which is why I felt like I could move around just fine, but I needed to relax.  And I sent him a photo of the blood on the bandage, and he said it was fine…just if it got worse I would need to go in.

That was enough to force myself to plop in front of the TV again.  I made it through almost both seasons of Netflix’s “Grace & Frankie” and as I was getting ready for my HGTV, TLC, FOOD rotation, my foot was ON FIRE.  Like, felt like it was on hot coals.  This pain was there for a solid 24 hours, even though I took my meds on schedule.  I also had so much stomach pain at 1:30 am I thought I was going to die in the bathroom.

Up at 6:30 am, and waited impatiently for 7:30 am to be able to take my pills, and wake up Dan.  He needed to go to the pharmacy STAT for something to help my stomach and make me normal again.  Also, huge shout out to my friend Maureen, who I have texted at odd hours of the night while in pain, and she’s been responding and listening to my TMI messages.  She is a new mom and she said my sleep schedule is much like her 7 week old sons, so it works out! 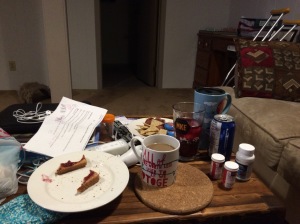 I managed a bath, somehow, at around 8 am.  I am so grateful we have a tub that allows my right foot to dangle over the side.  I felt a little more human after the bath.  I laid around all Sunday, felt a little better by dinner, and made myself eat a normal meal.  Friday and Saturday I had lived on ichiban for my dinner.  Tonight, Dan made some local farmer sausage, rice and asparagus on the grill.  It felt good to have real food in my tummy.  My foot started to not feel as painful, and I was able to sleep a little better at night.  By this night, I had gotten used to sleeping with the medical shoe on and rested on top of two pillows.  I slept almost 7 hours straight.

My foot was feeling tons better than over then weekend, but my gut still didn’t feel the greatest.  I kept myself pretty productive today, without pushing my self physically.  I even did some school work outside in the sun.  This is what I pictured this recovery to be like–laying in the sun, getting a tan, sipping a drink, and working on math.  Yeah, instead its me in sweats, drugged up and bloated, with wind and sawdust blowing in my face, working on math.  I’ve also spent a lot of time trying to crochet slippers. I have redone the ones I started about 6 times now, and those are going to get sent to my mom.  I am then making some for Maureen and my best friend Ali.  Watch out, pretty soon I’ll have a one-person sweat shop happening in our basement. 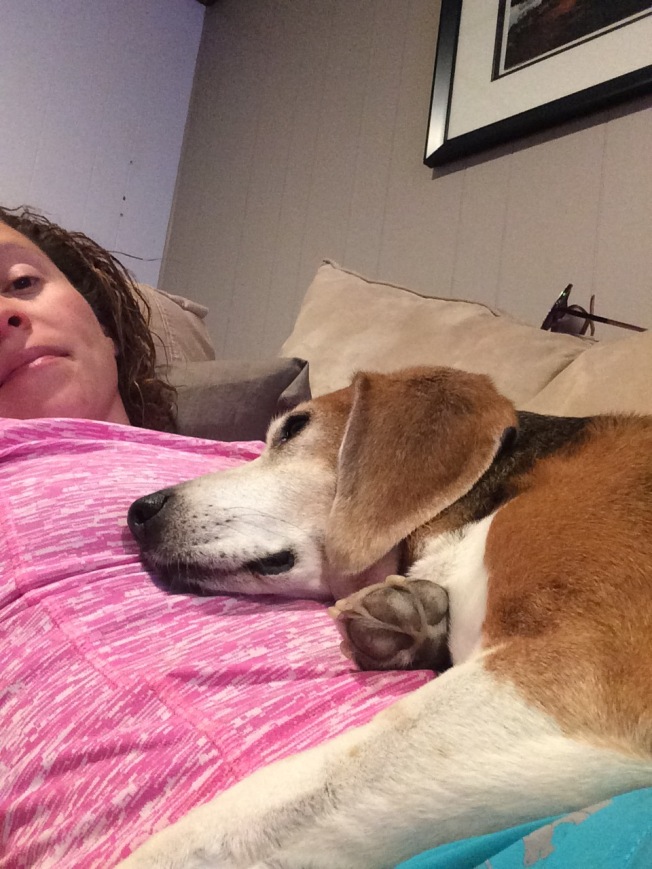 My friend Jaclyn came over after golf league and brought Dan and I donairs for dinner.  Yum!  My stomach immediately hated myself for eating it, but it was worth it.  Since my pain had been down on my foot, I stretched the time between my pain meds to be longer.  I took my last set of pain meds at 7:30 pm, even though I didn’t go to sleep until 1:30 am.  I wanted to be pain med free on Tuesday.

Well.  I slept until 10:30 am!  I woke up groggy, pain in my back (probably from the sofa) but my foot felt pretty good.  What have I done so far today?  Really, not much.  I called Dan, who was working on the deck in the rain, and he brought me down my regular medication, coffee, ichiban, water, etc.  After that smorgasbord, I took a nap.  Yeah, I’ve been really productive.  I didn’t finally change clothes until around 5:30 pm, and I am now writing this.  I pleaded for Dan to bring his laptop up from the shop and plug it in at the kitchen table so I could type this there.  I needed to be out of the basement.

Since I have now slept a gazillion hours, I will probably be up until 2 am doing who knows what.  I am currently awaiting my friend Bob to come back with Snoopy,, who he graciously took to the dog park with his dog Yasso.  Snoopy has been such a good little doctor the past few days!  And I appreciate my friends helping get him some exercise while I am laid up and while Dan is working.  During that time, I will also convince my husband to go to the liquor store and buy me wine.  I am off my pain meds, so I need a drink.

I need to keep this bandage on until Thursday, when I have my first follow up appointment.  The doctor will take the dressing of, allowing me time to freak out at my gross foot and examine how well they stitched my tattoo back together, and then bandage it back up until June 27th.  On the 27th, they take out the stitches, and I am hopefully given the go-ahead to be able to get in the water and start taking deep-water jogging classes.  During the time between these appointments, I will be doing much of the same as I have been doing since Friday-a whole lot of nothing.  I have to wear the medical shoe for at least 6 weeks, a lot longer than it would have been if I hadn’t gotten the bunion done.  I am not sure what that means in terms of walking, daily exercise, daily errands, etc.

So stay tuned for gross photos of my foot after the initial bandage is off!