On Sunday, October 14th, I participated in my first ever relay trail race, the Canmore Grizzly Ultra Marathon. I actually had never intended on running in this race, until one day in September I received a message on Facebook from a Dopey Training Crew member who lives in Calgary. Saskia and I had talked online after realizing we both lived in Alberta and had joined the same Dopey Challenge training group. We even met up at the Edmonton Half Marathon in August. So when all of her relay members for the Grizzly Ultra started bailing on her, she got desperate and asked a random girl (me) who lived in Lethbridge, loved to run, and who she sorta knew.

I said Yeah! and she signed me up. After some discussion, we decided I would run the first leg of the 50km relay, which was a 14 km portion. This leg was described as a “fast, non-technical leg for runner’s with lots of endurance.” The difficulty was 3 out of 5 claws. (Get it….claws….like grizzly claws….yeah).

I went to Calgary the night before, as Saskia let me stay over for the night. I almost didn’t want to come, however, as Friday night I slept for a solid 12 hours because I had started coming down with a cold. And Saturday, even though I had a race the following day, I was suppose to do 7 miles easy. I just couldn’t. I took a 3 hour nap instead. I was feeling in rough shape. All that sleeping and then trying to go to bed early in preparation for a 5 am wake up call didn’t add up well for a great pre-race nights’ sleep. I think I woke up every hour.

We headed to Canmore at 6 am Sunday. We had all sorts of camping gear packed, as we needed to set up a base camp area outside the Nordic center for when we were done/waiting for our legs to start. Trish, our leg 5 runner, drove out with us to the Nordic center. This would be her first race….ever! I didn’t find that out till later during probably Adele’s leg 3, but it was very cool to know we had a total race newbie. Adele and Greg, the leg 2 and leg 3 runners, were meeting us there. Saskia would be doing leg 4.

I have to say, once we got to Canmore, I got a little nervous. The only other previous trail race I have done was my Coulee Cactus Crawl. I was very thankful to be the first leg, as it meant my pre-race prep would be the same, and I wouldn’t be sitting around for hours after the official start for my turn. I had studied the diagrams of elevation for my leg of the course, and I had a positive attitude about being able to handle the terrain. When the 9 am start came, I was set…off I went with all the other Leg 1 runners and soloists!

The other nice thing about being the first leg of the relay was having people surrounding you during the whole 14km. It started to spread out more by around 6 km in, but I always had people directly in front or around me. This helped with my pacing and also pushed me. The leg I ran was a wide double-track course and only occasionally did the terrain become rocky and rough. There was only one hill that slowed me down quite a bit, but then we hit a turn around and going back down it was awesome!

Since there are no mile markers on the trail, I kept referring to my GPS to get a better idea of how much more I had to run. Being in the woods made it interesting, as you had no real idea to where you were in relation to the finish line….there was no way to see through the trees! I could sense, though, when we were getting on the home stretch, as we ran back on pieces of the beginning of the race. I could hear commotion and announcements through the trees, and soon we hit the paved main road….I was almost done!

I pushed my way through to the finish in a time of 1:13:20! I was pleasantly surprised with my time, and I definitely think that Erin telling me I could get the 14 km done in under 1:20 really pushed me. It was a little chaotic finding Greg in the relay exchange area, as I had to stop quickly and was a little disoriented. Soon he had our timing chip and was off, and I got my finisher’s medal!

The rest of huge day was spent going from inside to outside and trying to stay warm as we waited for all our runners to run their legs. I felt fantastic during the run, but the hours that followed led to an extremely runny nose and an overall feeling of garbage. I tried to keep my mind off of the fact I was starting to feel petty sick by watching for our runners coming back and also keeping an eye out for Erin as she came through for each leg. 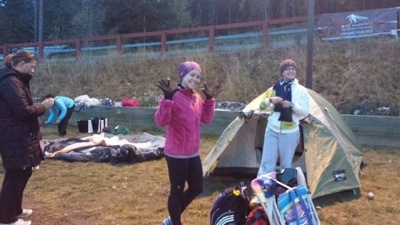 In the end, our team finished with a time of 6:13:24. It was awesome. Seeing all our runners come in at the end of their legs and then our next runners head out to start their leg, but it was especially cool to see Trish finish for us, since it was her first race ever! This race was organized very well and the scenery was next to none….beautiful! I would definitely recommend this race for runners looking for a change of pace an a challenge! We are all already talking about doing it again next year, and now we all wouldn’t be strangers!