Today ends my 16 day extravaganza in Walt Disney World. Maureen and I are still friends, even after spending August 1-16 in a small Disney “value resort” room, so that’s what matters. We honestly never got sick of Disney World! Really! We just started to get really, really tired….and really, really wacko. Hence, our decision to have me do a “beat the bus” challenge on August 14th. A little background in this decision first….

The last year my mom, dad and I stayed at Yacht Club while in Disney World (2003) we had the luxury of being able to walk to both EPCOT and Disney Hollywood Studios from the resort. This was a great option instead of having to take the bus everywhere. We would usually walk back from the Studios, but if my mom had her way, we would take the alternate option of the boat. One morning, the boat was not there yet so my dad and I convinced my mom to walk with us, because we could “beat the boat.” She obliged, and since the boat wasn’t even at the Yacht Club dock yet, we felt solid. Well, we got past the hotel docks the boat stops at and the boat was behind us, in our sight. Dad and I couldn’t lose, so we started speed walking, and then to a jog, and then too pretty fast clip.

Mom was not pleased.

But, we did beat the boat. And my dad and I thought it was hysterical. My mom, however, did not. 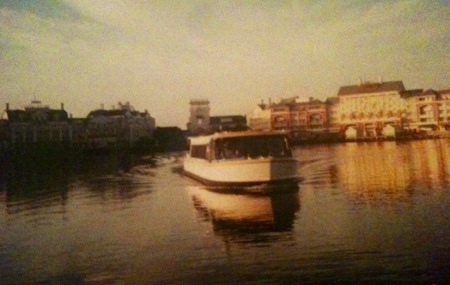 So now fast forward to August 2013. It’s hot as hell in Disney World. The humidity is through the roof. It’s your 14th day of vacation. So naturally, you decide to run 2+miles in the early afternoon heat, without a sidewalk, and without running shoes.

I don’t know how it came up, but one of the times we had to wait for a bus at the Studios it was taking longer than the advertised “every 20 minutes.” I must have told Maureen I could run back to Pop Century faster. On that bus ride “home”, we decided that on August 14th, during our “Four Parks, One Day” mess, I would run back to the resort while Maureen casually walked to the bus stop. We routed the distance the Studios main gate to our hotel room using Google Maps, and the distance was only 2.3 miles. I would run the same route as the bus, all in the attempt to beat Maureen and have the glory and recognition that goes with the title…Thus, the challenge was born.

So August 14th rolled around. Alarm went off at 5:30 am, as we had an early magic hour morning planned at Animal Kingdom. After Animal Kingdom, we headed to the Studios for a short while. We had already done a lot that morning when 10:30 am rolled around and we slowly started heading out of the park. 10:30 am is early…but in Florida, the heat is already kicked in. Note in the two photos below how “gung-ho” I am to begin this challenge 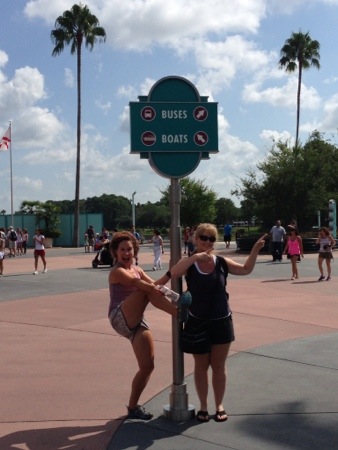 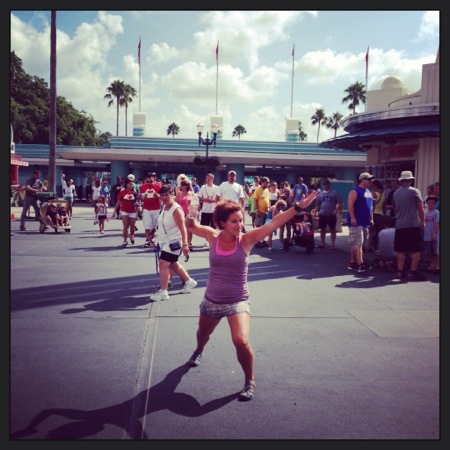 As we left the main gate, I bid Maureen ‘Adieu!’ and started bolting out of the lot. Please note—I had not ran since the 10 miles I did on July 31st. Sure, we had been logging 10+ miles of walking each day while in Disney, but I was taking this vacation as the break I probably needed from my running. And because of that, I did not pack my tennis shoes. So, I ran in my Keen’s hiking sandals. Oh, this was going to be good….

I was going at a fast clip out of the lot, mainly because I felt like an idiot running from the park. At my first turn onto the main roadway (Buena Vista Drive) I came in contact with my first “obstacle”—no sidewalk. I was aware this would occur, as I knew what this route entailed, so I dug my Keen-wearing feet onto the soggy Orlando sod and trucked along. This was some resistance training! I came to find out later that Maureen lucked out and caught a bus immediately after going to the bus station, so she passed me at this point, but luckily got a photo of my efforts. 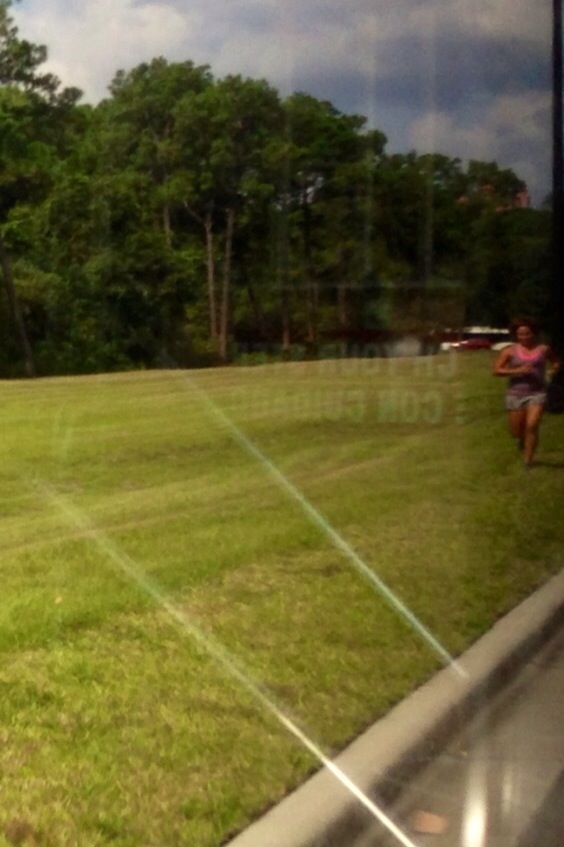 I kept trucking down Buena Vista Drive and at my first mile, I clocked 7:58! I was racing! It was at this point the sweat poured into my eyes and my shoulders started to burn from the heat. I had no idea myself where Maureen was, so I kept booking it. I turned right at the ESPN Wide World of Sports sign, and then straight ahead I could see my final turn into the resort. 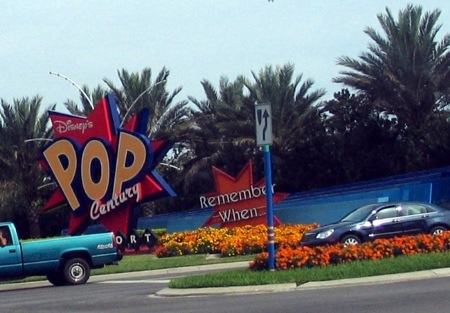 I cut through the resort exit driveway, through a parking lot, ran to our building and up to our room on the 2nd floor. After digging my room key out of my shorts zipper, I entered the air conditioned room hoping to claim victory!….but Maureen was lying on the bed. Yes….she won this time. But her bus arrival was perfect timing! So I will defend myself and say I COULD have beaten her if the bus even was 8 minutes late, or if someone needing assistance with a wheelchair had needed to get on. The final distance from gate to room—2.3 miles. My time—19 minutes and 30 seconds. Not to shabby, if I do say so myself.

And running in those Keen’s……while i wouldn’t make this a normal occurrence, I had bought them before the Disney trip, and let me say….I recommend them for anyone wanting comfortable sandals who do a lot of walking. I didn’t buy the heavy-duty ones for all-terrain hiking, but these were perfect for trekking through Disney for miles upon miles a day. I even took the liberty of taking a creepy photo of a family wearing coordinating Keen’s while walking around EPCOT….no big deal! 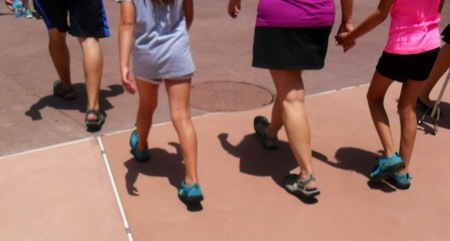 So now as my flight from Denver approaches Calgary, I reminisce abut the memories from the past 16 days…this “beat the bus challenge” was just one crazy idea we had, and if I were to list all of them here, you would never read my site again. I did joke that this challenge was good “Spartan Race” Preparation, as this Sunday, my husband and I will be participating in our SECOND Spartan Sprint! This one is just a 5 km race and is in Calgary at a bike park. So, the terrain isn’t mountainous like the one we did in Montana…and while I haven’t been running or doing Spartan Specific Workouts of the Day, I have been sweating my ass off daily in Disney world, running in ridiculous conditions, and dragging a backpack around the airport while in layover. I think my backpack did weigh about 30 pounds today, no lie, and I wandered for a good hour in Denver.

So how will I do in the Spartan Race Calgary? Who knows. My mom thinks it will be laughable given I was vacationing and living the good life for the past 16 days. We will see…and I will show her. Remember, I showed her when dad and I beat the boat back 10 years ago! 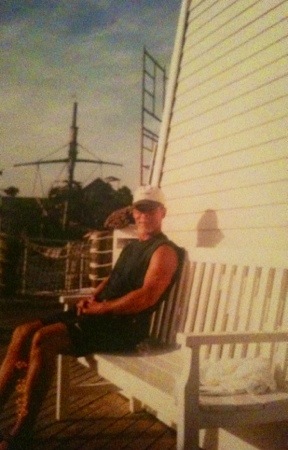