June 1st marked the fourth race weekend in a row, with myself previously doing the Spartan Sprint, Woody’s RV Half Marathon and the Calgary Half Marathon.. So naturally, I thought it to be a good idea and run a 20+ mile trail race in the coulees of Lethbridge. Yes, I did know what I was getting myself into—-the coulees and landscape of Lethbridge is extremely cross country and challenging. But I figured I was up for the challenge.

I went into this race telling myself this was for completion, not time.. I was fine with that, as looking at previous years’ results, there were many DNF (did not finish) results in the solo categories. You can enter this race as a solo runner, or as part of a relay team with up to five runners. The way the five legs were set up created a few repeat areas in the course, as relay transition areas were located on flat areas at the top of the coulees. These spots also had water, which I used to refill my hydration belt, and a good resting point, which I took advantage of for a few minutes each time I reach a peak.

The weather in Lethbridge had been questionable all week and inconsistent—some days reached 80 degrees, and other evenings we would have a hailstorm. The weather at the high noon start time of the Coulee Cactus Crawl was in the mid 60s, reaching the 70s, with very little cloud coverage. For a short 5k, this would have been fantastic. The cloud coverage didn’t show until about 3.5 hours in. But, regardless, the race started at Fort Whoop Up at noon, and away went all the first relay members and all the crazy solo runners.

I felt pretty strong the first leg and ran all the hills, until I hit the incredibly cruel climb to the college parking lot where relay exchange #1 was located. No exaggeration, but this incline was about 50 meters at a 75 degree angle of elevation.. Once to the top, you checked in with the volunteers, who recorded your time (no chip timing). People in the exchange area then realized how much of an idiot I was, because my bib had a black number that was between 1-30. All relay e members had red numbers greater than 100. Runner #1 checked her sanity level, got some water, and barreled down the hill to continue on leg 2.

The long and short of the race was that as I moved on, I knew for my own survival and wellness, I would need to walk up any steep-grade hills as I felt necessary. Some I could run the first time I met them, and then later, I would have to power walk. Yes, I had done some of these “obstacles” before on marathon club runs (the wooden stairs by the Sugar Bowl are a bitch) but there were some very narrow, unstable areas that I had to be cautious around, mainly because I wasn’t use to these extremes. I did see some fantastic areas of south Lethbridge that I did not know existed. I plan on using these trails in the future with my husband and dog, as the views were gorgeous and breathtaking. I have a new appreciation for individuals who call them selves trail runners, as it takes a different level of athleticism to complete this type of course competitively!

By the time I finished, 4 hours 56 minutes and some odd seconds had passed. The course totaled 21.5 miles, as told by my Nike+ GPS watch. If you are curious of the route, elevation, and craziness of this route, click the link below, as it shows my turtle-like paces through the terrain:

I ended up not finishing last, which was fantastic. I was one of four women to run the race solo. I even got a medal for finishing 2nd in women under 40! (There was only two of us, but hey, I will take what I can get!)

This race was a great experience, and I am happy I registered and mustered on through.. I got to see parts of the city I live in that I never knew existed. I gained a new appreciation for runners who partake in trail running and ultra-race events. I also want to thank Runners Soul for putting on this fantastic event, as the concept of being able to do a relay race through this beautiful landscape is fantastic. Also, the chance to run it as a solo idiot is fantastic too 🙂 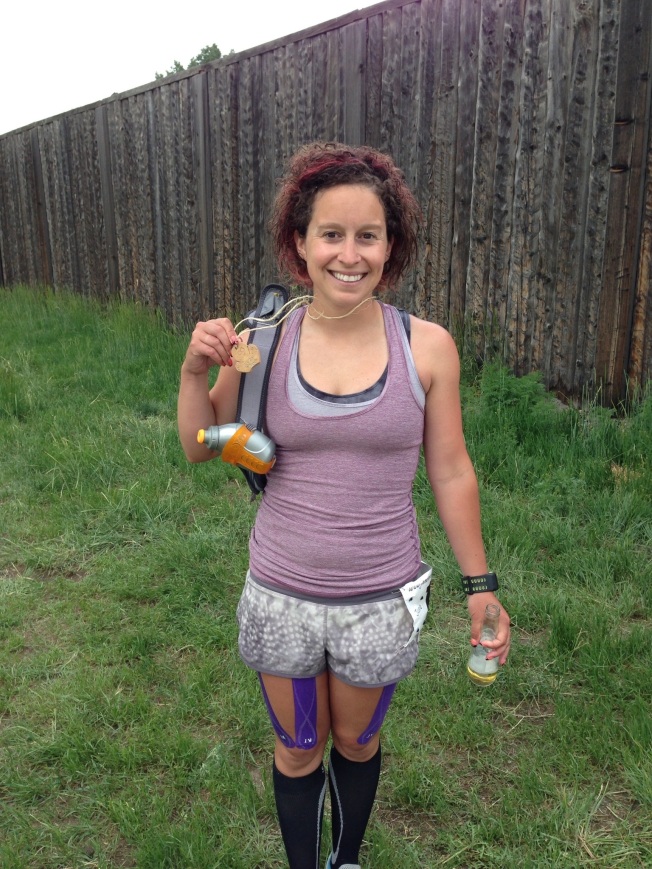