Since I did not have a race this weekend and would have no race recap to do, I decided to continue a post I started previously. Back on January 27th, 2013, I posted about my dad’s early years and spoke about his leaving the orphanage in Quebec, becoming a US citizen, and growing up in Beloit, Wisconsin. That entry can be found by following this link:
You Have to Take a Look Back in order to Take a Look Forward…

Today, I am going to talk about my dad’s middle childhood years, when his family moved overseas to Zurich, Switzerland. The experiences he had there were always fascinating to me, but when I was growing up and would ask my dad about life over there, he didn’t really have much he remembered. There were limited photos and some of my dad’s stories I assumed to be exaggerated. Since my dad passed away, my husband and I have spent two vacations visiting my dad’s brother and his wife, Uncle Ed and Aunt Dorothy, at their summer home in Longville, Minnesota (the ‘Turtle Race Capitol of the World’. No joke!). Uncle Ed has been an excellent source for accurate stories and memories, as he seems to have a memory vault as a brain! So this entry would not have been fully possible if it wasn’t for those late nights up in Longville talking with Uncle Ed, or the email he sent me a few weeks back giving me more details about their time overseas that I didn’t even know about!

My dad and his family lived in Beloit, Wisconsin, up until my dad was 8 and a half. My grandpa worked for Beloit Corporation (Later called Beloit Iron Works) and they established their headquarters in Zurich, Switzerland, in 1961. My grandpa was transferred out there as Chief Financial Officer. My grandma, dad, and Uncle Ed went out to meet my grandpa in Zurich in May 1961. They travelled by boat, leaving from the port in New York, with their final destination being LeHarve, France. My dad is fine on the boat, but apparently my Uncle Ed was very sick the whole time! They arrived in Zurich 10 days layer, where they stayed downtown at the Carlton Elite until they could move into Klus Strasse 46, and later moving to 173 Witikonerstrasse.

The schooling my dad and his brother received over there is what I find most intriguing. My dad and his brother were three grades apart, which for some time meant they were at different school. My dad started in 3rd grade at an American school in Zurich in August 1961, as my uncle went to a British day school for 6th grade. It was the following year that things started to really change. My Uncle Ed began boarding school in Zugerberg at the Institut Montana, which at that time was an all-boys boarding school. The school is on a mountain and my uncle tells me they had fabulous skiing, and at that time, they had a 2 1/2 kilometer road that they closed in the winter for a sled run! My dad loved skiing and anything to do with winter sports! The school is still in existence to this date, but now accepts both sexes. I hope to someday travel overseas and actually visit Institut Montana! (There is a link at the bottom of this entry to the school’s website)

Uncle Ed says the reason he was switched to boarding school was because of the better education. During the time while Ed was at boarding school, my dad continued school in Zurich and stayed at home with their parents. Ed only saw my dad on holidays during those years. My dad began school in Zugerberg in 1965, when he was in 6th grade. He was in the Juventus building. My dad apparently had no adjustment issues and had actually gone to the Zurich school with 2 of his new classmates. While my dad and uncle were now at the same school, they did not see each other much. They had different classrooms, different living quarters. They wold briefly see one another while waiting to enter the dining room, but did not sit together. They were seated by class with their teachers while in the dining room.

My dad did not go home too many weekends, as there was much more to do at school than at home. Also, they went to school on Saturdays, so there wasn’t much time to even get back to Zurich! My uncle tells me that while he was an obnoxious, challenging teenager, my dad was nice and well-liked, but a loud kid. He was always watched out for by his brother, but rarely needed intervention! I personally enjoy the yearbook entries and comments they included about the students. Below are a snapshot of some of the real gems! 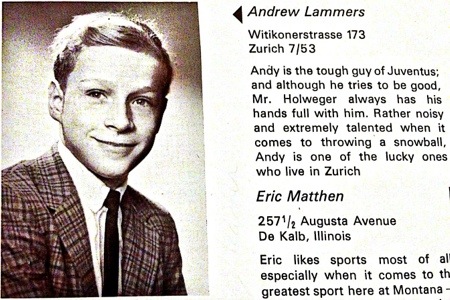 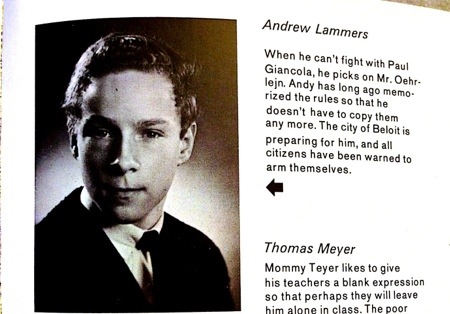 The culture and worldly experiences my dad and his brother got to experience by being at boarding school in Zugerberg is amazing, and I’m immensely jealous! When my dad was in 6th grade (1965), they both went on a 3 week Easter trip to Greece and the Greek Islands. They went along with about 30 other students from Zugerberg. For Easter 1966, they both went on another 3 week school trip, but this time to Syria, Lebanon, Eqypt, Jordan, and Israel. My uncle tells me this one was simply an incredible experience, but that the political tensions were high-the Six Day War occurred the following year.

I really value the stories and information Uncle Ed has shared with me recently, as my dad just would talk about general things from his experiences. Oh, and trust me, Uncle Ed has some wicked stories from their youth overseas, including but not limited to seeing The Beatles at some outdoor concert in Germany with a little-known-band called The Rolling Stones opening for them! I am sure if my dad was still alive and I asked more about these trips, he would divulge more stories, but he never just openly shared. I really enjoy finding out more about my dad’s past, because as I have eluded to before—-you need to know about where you came from, in order to enjoy where you are going.