There is always something new at WDW no matter how many times you go. It may be a ride, event, show, merchandise, restaurant or hotel. But there are always things you have to do each trip. This may be eat at a certain restaurant, see a certain show, go to a specific park first when arriving. It may also be taking the same photo as you do every year. In the same pose. In the same spot. With the same people.

Photo-op traditions have become more significant to me as the number of Disney trips I have gone in has increased. Family trips to Disney World with my mom and dad total 6, however, my overall total is much more. I went to Walt Disney World 3 times in high school with the Franklin High School Pom Pon Squad as part of the Badgerette All-Star Talent Tour. My mom and I have gone together 3 times since my dad passed away. And my friend Maureen and I have gone twice together. And this year I am getting an annual pass, since Maureen and I are going for a crazy 16 days in August of this year…my mom, husband, and I are going for the marathon weekend in January…and my mom and I will also go next July for a week. So yes, the current visits total 14 times, but after this year I will have been to my favorite place on Earth 17 times. Insanity!

Photo ops with my parents didn’t get that crazy until in later years when I started to feel nostalgic. I started making my mom take photos of me in the same pose as older photos probably in Spring 2003. That was the year I was in Photography class in High School and we could do whatever final project we wanted. I did a family trip to Walt Disney World scrapbook, where I used black and white film and captured moments from our final family trip to WDW. I put them in an old-timely scrapbook, wrote our captions, and decorated it appropriately. It was at the end of this album that I did a few “flashback photos.” Below is one example I did, where you have a photo of me in October 1991 on our first trip, on the carousel, and a second photo of me in 2003, attempting to strike the same pose. 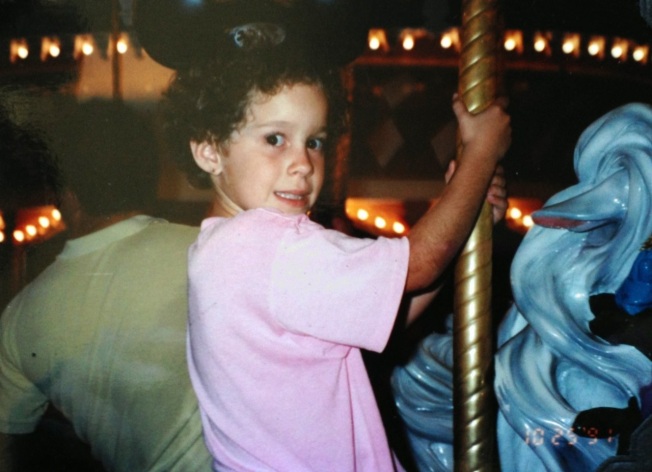 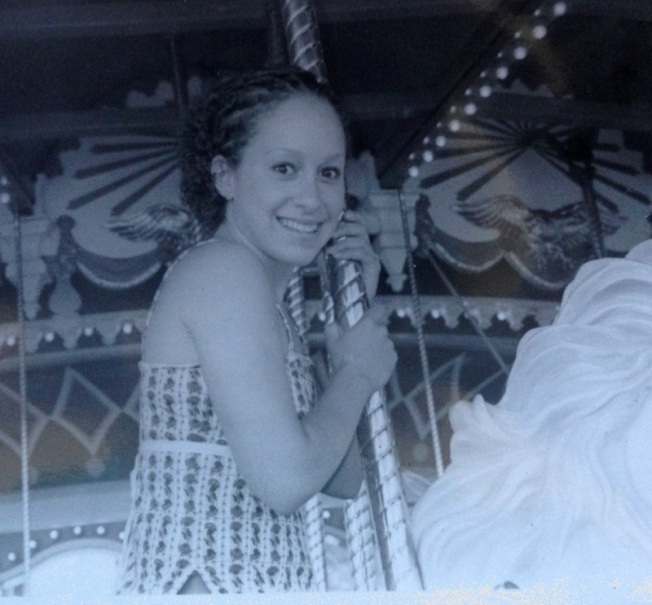 Cute, right!?!? So now I make a point of doing photo-ops like these on trips I go on now. I love the nostalgic feeling and it reminds me of the great times we had on initial trips as a family. Another photo-op most people who visit WDW take part in is a photo with the wooden stockades as you enter Frontierland. I have a photo from every trip in this said stockade. And it all started with this solo photo in 1991: 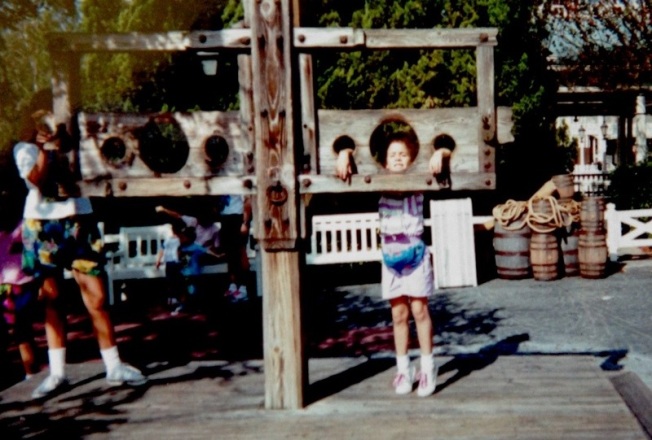 Please take note of my style and height. I am 7 years old and rockin’ a lavender and white tank top and corduroy short set. My fanny pack is gigantic, so I can fit my disposable camera and autograph book comfortably. I look to be in much pain, as I can barely reach the head hole. Go forward two years later, and it was a little better: 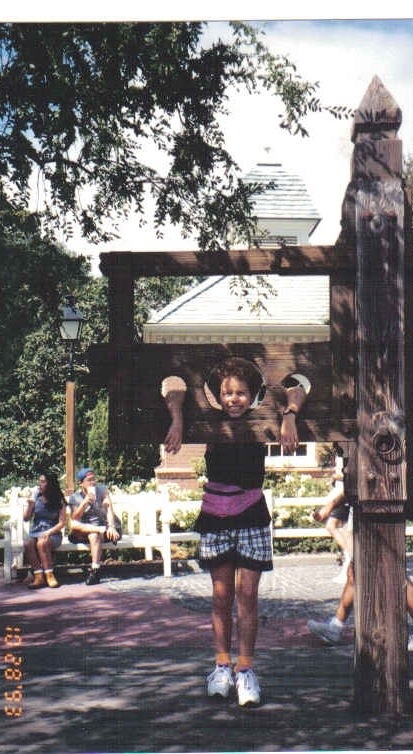 October 1993. Again, matching tank tops and shorts must have been a thing, or at least it was for me. I upgraded my fanny pack to a gigantic pink one. Who the hell knows why? The only extra thing in there had to be my EPCOT “passport” that got stamped in every country. I didn’t do a good job of keeping it in there, though, as I left it in the United Kingdom bathroom. It did get recovered, thou. Phew! After 1993, it seemed like a good idea to add something to these annual trip photos. My dad: 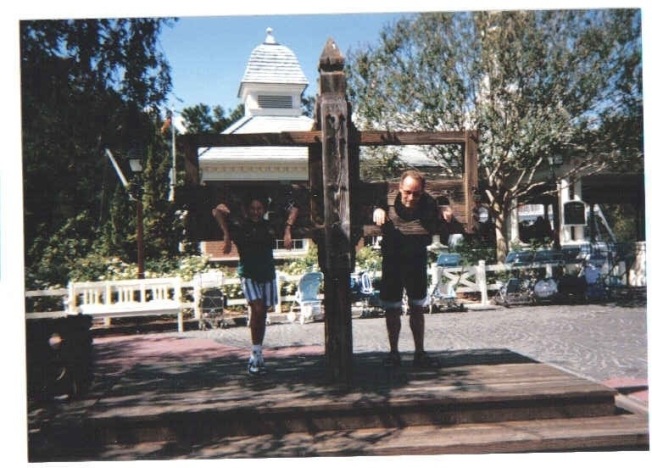 I am still a “style icon” with more patterned shorts and a coordinated tank top. However, the fanny pack has been ditched, since it is not cool anymore (Was it ever cool?). And I now do reach the stockade openings with no effort. But the addition of my dad in 1995 was glorious. He had his triple bypass surgery in June 1995, so this was a big trip for us three. In photos other than this one, you notice how thin he is, compared to his built-bulky-strong self we were use to. He never could fit his arms through those tiny openings, but he enjoyed posing with me anyway. May 1997 was the same old news 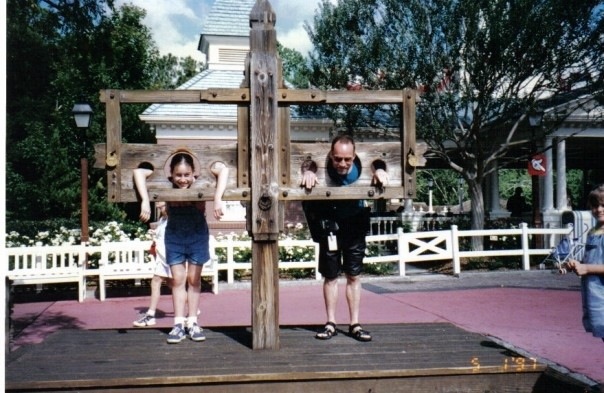 Um, please…why didn’t someone tell me that my middle part in my hair was bad, that my ‘short-alls’ were ugly, and that I was a soccer player so I shouldn’t be wearing those Adidas shoes?. My dad was wearing his usual WDW garb-a muscle shirt, athletic shorts, sandals, and no sunscreen. Could it get any better?…. 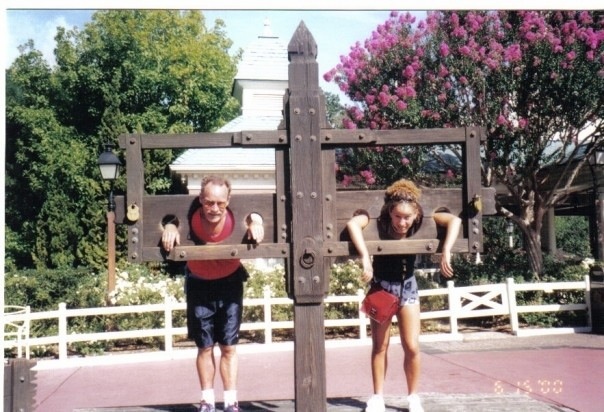 Well, in June 2000 we messed up our positions, with me on the other side. But now I am back to what I was so good at back in the day-wearing patterned shorts and a matching tank top. Blue Hawaiian floral was so hot in the millennium…and I had a navy tank top to match. My dad coordinated with me well too, going for the American look of a red muscle shirt and navy blue shorts. Little did we realize his shirt coordinated so well with my unnecessarily massive red purse. Why do I always carry gigantic bags in WDW? In the heat nonetheless? I have to work on that.

So then there was one more family trip left. Spring break 2003. Little did we know this would be the last opportunity for a Dad-Daughter stockade photo. Even at 18 years old, I had to get this done. It was a tradition!: 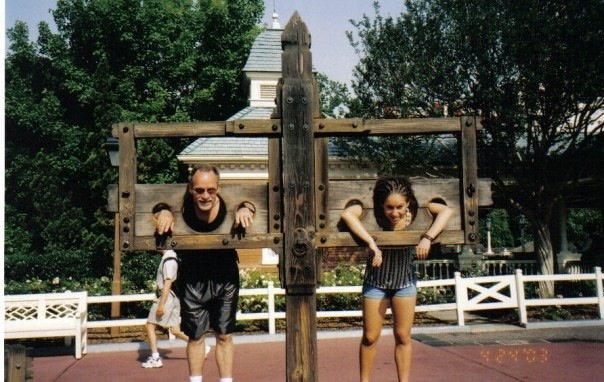 This one isn’t a total fashion disaster. Actually, we look pretty put together if I do say so myself. I now have jean shorts on and a crazy top, and dad has on his go-to athletic wear. I am hiding my gigantic purse somewhere, and we don’t look like idiots. We are happy to be in the stockade together.

Ever since this last trip I still always get a stockade photo taken, either by my mom or by Maureen. It has to be done! And this year maybe I can get Dan to start taking them with me, when we go down for the marathon. There are so many other photo-ops and traditions that occur on my WDW trips now, but this one is a personal favorite. 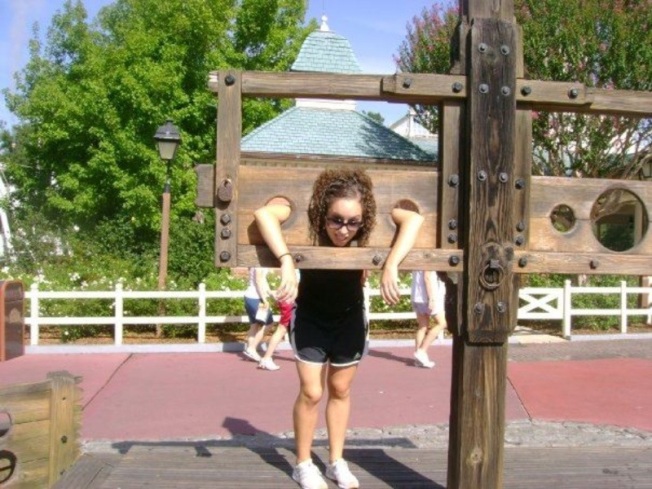 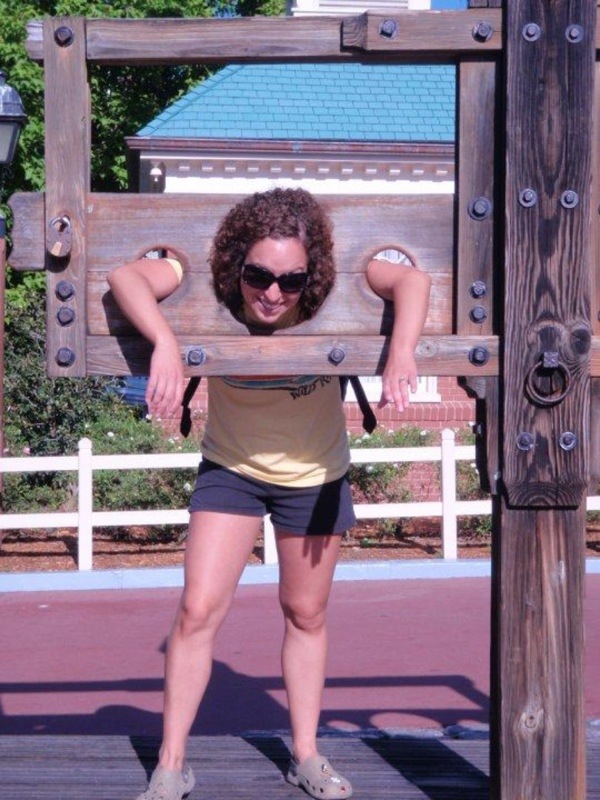 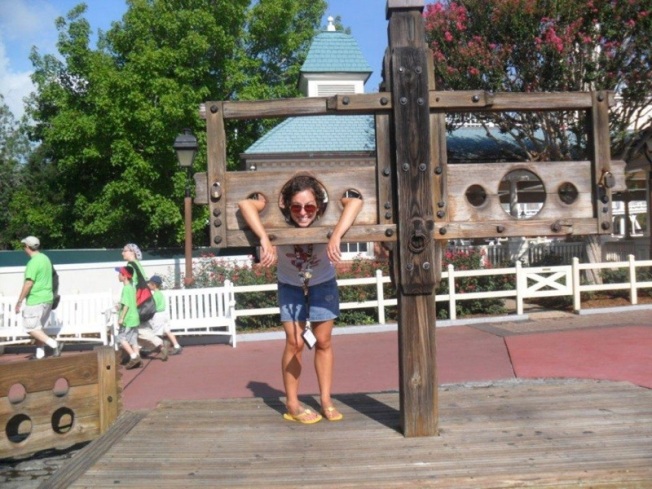 and for one last final thought…lets take this full circle….Spring Break 2010…almost 20 years after the first carousel picture… 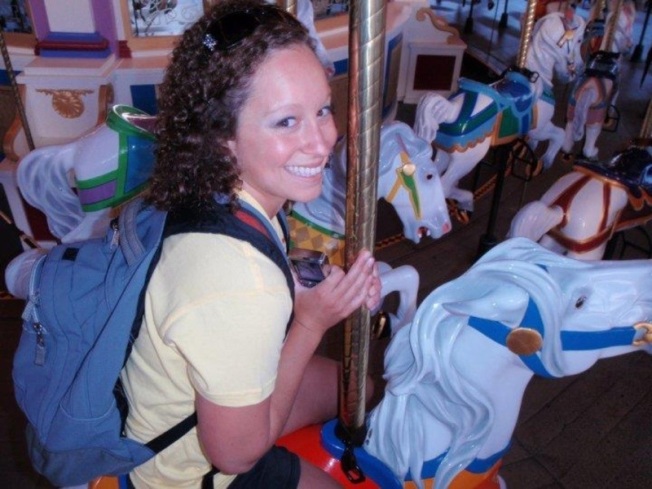