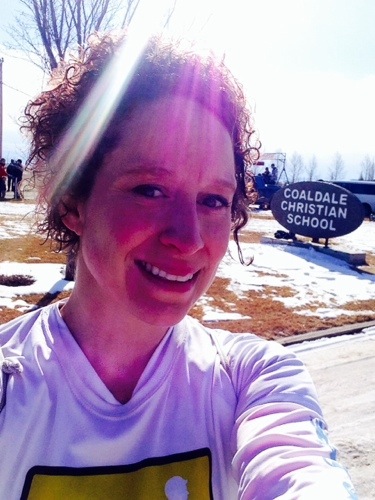 Today I ran the Coaldale Family Fun Run 5km. While I ran a ridiculous 22 races in 2013, not one of these were a traditional chip-timed 5 km event! I haven’t ran a traditional 5 km timed event since my days at UW-La Crosse, and that would usually be once a year during the annual Turkey Trot. My personal best for a 5km race goes way back….wayyy back!….to August 2003 when I ran the Milwaukee Brewers Sausage Race 5 km in 22:09.

The Coaldale 5km was a small local event held to raise funds for the Coaldale Christian School. Coaldale is about 25 minutes east of West Lethbridge, so getting over to the race start was easy this morning. I had picked my packet up the day before, so I parked in a neighborhood at 9:40 and jogged to the start at the school. 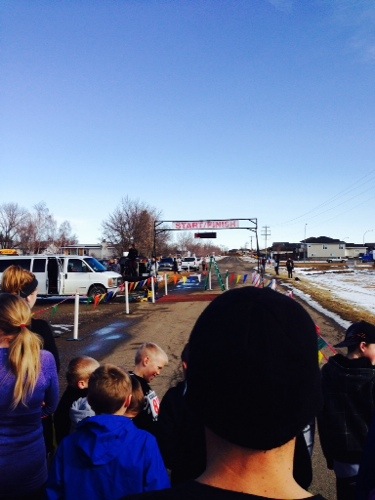 A lot of families were at this event today, which was fantastic. What was even better was that we had a strange three-hour pocket of sunny warm weather! It was around 50 degrees at start time. The race started at 10 am, with the route taking us out on a paved road towards highway 3. Not going to lie—I went out way too fast. As I pounded out of the starting gate, I knew within 100 metres this race was going to hurt. My legs and my glutes already had tension forming due to the faster threshold I was attempting to hold. I just kept telling myself it would only be 5 km….just a 5 km!

I chose to listen to my music this race, which is rare. Problem was, I didn’t have an arm band or my waist band for my phone. I held it the whole race with my headphones in. I now wish I hadn’t held it, so I could have relaxed my hands, but nothing I can do about that now. In case anyone cares, it took approximately one full play of Macklemore’s “Can’t Hold Us” to do 1 kilometer. Now you know!

I was holding my ground fairly well during the race, but could tell I was slowing down about 3/4 through. The paved road turned to gravel, and it was a little mushy. Definitely not a “fast” track. At about 4 km, a lady did pass me, and she turned out to be the 20-29 female winner. As she passed me, I gave her a thumbs up. Again, gotta keep up the good karma! There was no way I could have possibly gone any faster, so no biggie!

When I finished in 22:59 (yes, for real…just broke 23 minutes) my chest hurt and burned so bad. I felt more exhausted than I did last week at Run for L’Arche Half Marathon when I ran 1:38! I was overjoyed to be done with this race, but I couldn’t just walk it off like it didn’t hurt. I had to wander around the finish area a few minutes before my chest and throat stopped burning before I could even attempt to walk and get water! 5 km races are tough for us half marathon runners!

The awards were held shortly after in the gym of the school. They had lots of post race snacks (I had chocolate milk, an orange and coffee). One awesome thing that they did during awards was intersperse random prize draws between the age categories. They also gave awards to the youngest runner, the oldest runner, and the family with the most participants. That family got an incredible gift basket and the kids were so excited to “win” it!

I earned a silver medal in the female 20-29 category. I was 2/16 in my category, 5/125 females, and 23/225 runners overall. This “fun run” really was just that—-the energy was positive, the crowd was fired up, the weather was beautiful, the perks were outstanding. I would definitely recommend this run to anyone in the Lethbridge area looking for a Spring 5km next year! 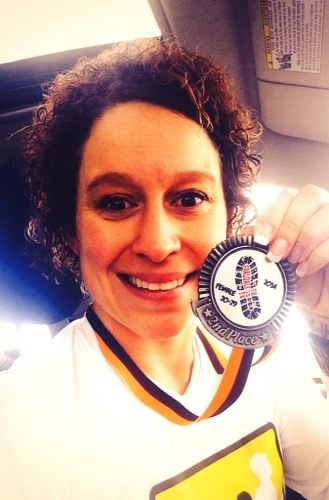