Call us crazy, but the first vacation we took our son on was to Walt Disney World. And if you want to call us crazy, just keep it to yourself. You see, I know that Andy won’t remember anything from this trip. After all, Andy turned 6 months the day we left on the vacation. But Walt Disney World is a place I feel very comfortable in travelling to. This blog started as one about “Walt Disney, Running and my Dad.” Those three things all tied together for this “first vacation” as we we brought Andy, who was named after my late father, to Disney World…Dan and I ran in the Star Wars First Order 10km & Half Marathon Challenge…and on the day we left it was 14 years since my father passed away. So to go to Disney with baby Andy and run a 10km and half marathon one day after another while surrounded by the memories of the trips my family made together in the past makes sense!

Is traveling to Disney World with a 6 month old for everyone? Probably not. Like I said above, I have been to Disney a lot. I could take the time to count the individual trips but I believe I am now over 20. I am familiar with the resort enough that I figured it would help ease the stress of travelling with an infant.

And trust me…it did. 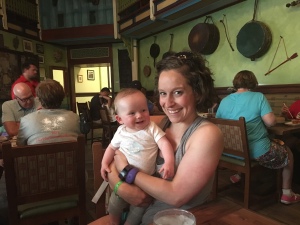 The first airplane ride was going to be a challenge no matter wheee we were going. I booked the tickets before Andy was born, and in my head I figured a red eye would be ok because “he would sleep.” Well. He maybe would have slept better if Dan and I hadn’t tried to stick to our “plan” so much. We assumed that having him in the Ergo chest carrier would be just fine while we flew. But really, he got too warm and was PISSED. He did better the second portion of the trip after our connection because we just swaddled him in his blanket and laid him across us. So rule #1-don’t stick to what you think will work best, because ultimately the baby will tell you what does! 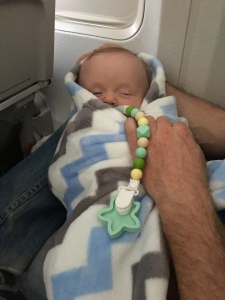 One thing I was anxious about in the general travelling issues with this trip was travelling with breast milk. I was bringing about 2L of frozen milk in a soft sided carrier (Dan’s personal item for onboard) and then a few bottles of fresh milk. We had no issues going through security and customs. So easy!

Pumping while flying is a different story. I had originally wanted to keep my fresh supply the same as normal, but after the terrible red eye flight I was so tired and worn out. I had thought I would pump in the Priority Pass lounge in Toronto but I forgot to pack my ID card and couldn’t remember my log in information on the app. So I pumped in some sketchy corner of the airport. Instead of worrying about pumping at the airport in those conditions, I should have just breastfed. I’m not 100% confident in my breastfeeding abilities, which is why I stray away from it, and I don’t like not knowing how much he intakes during a session. But doing this on the flight did help calm him down and also made it easier than dealing with pump parts. If you are a breastfeeding mama who does give the baby a bottle with expressed milk, I strongly encourage bringing frozen milk on a trip because once we arrive to our resort I stored the milk in the fridge. The frozen milk was thawed slowly and used within two days. This gave me time to build back my fresh supply from pumping. It also allowed us to be relaxed on the trip and not have our plans dictated by a pumping schedule.

Going to the Disney parks with Andy was definitely different than any of my previous trips where I’d gone with family or friends. I knew that we’d have to definitely do it in pieces with an afternoon break. As the trip progressed we really did listen to Andy on when it was time to go home. For instance, our second Magic Kingdom day we had a Splash Mountain fastpass after lunch. Andy was getting tired, and if we did the fastpass we would probably be adding on another hour to our day before getting to hotel. While Andy did fall asleep in the stroller or chest carrier on this trip his naps in those positions weren’t of high quality. Getting him back to the hotel for a proper nap was key. It also allowed us to enjoy the evening more. What worked for us-we’d get back to the hotel for his nap. I would pump and dan would get him settled. Dan would take a nap too and I’d go to the pool. We could usually count on 2 hours of a nap for him in the pack and play, so he’d be ready to go for a short evening at EPCOT then!

Andy did a handful of rides: at Magic Kingdom he did People Mover, Dumbo, Small World (ate a bottle during 3/4 of it), Peter Pans Flight (asleep in chest carrier the whole time), Voyage of the Little Mermaid and saw Mickey Mouse at Town Square Theatre (unimpressed but good). At EPCOT he did Nemo (just wanted to stand up the whole time), saw fish at Living Seas (was wide eyed), Gran Fiesta Tour Boat Ride in Mexico (loved it and did great) and Frozen in Norway….whoops, sorry Andy for scarring you for life! He was getting tired during our fastpass time but I strapped him to my chest and we road anyway. What the picture doesn’t show is that he is wailing so loud as we go down that little hill. It was too loud and too much for him. He screamed as Elsa sang “LET IT GO!” 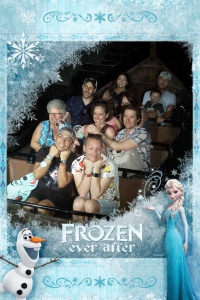 At Hollywood Studios the only thing he did was get pictures with Minnie & Mickey. And at Animal Kingdom he road Kilimanjaro Safaris and went on the Pangani Forest Trail. Andy is happiest in the morning so we made sure to do the safaris first thing. I was nervous since it’s a 20 minute ride, but I had him in the chest carrier looking out and when he started to fuss we distracted him by giving him solid food (those dissolvable crackers for babies). Worked so well! One of the moms in my Mommy Connections class suggested those so I’m glad we bought them before the trip. 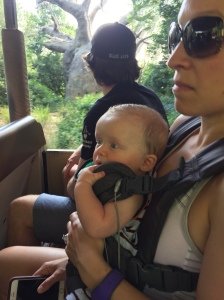 If you go to Disney and want to do the rides, using Baby Swap/Rider Switch is a must. I knew it existed, but did not really understand how to best utilize it. A friend and her husband explained it to me a few days before leaving and it was well worth using! You could also plan fastpasses a bit better if you wanted to try to do more rides and do rider switch, but we just stuck with our original plans. The key component is that rider switch is good for up to three guests. If you have a fastpass, your whole party & Baby go to fastpass area to check in. (They need to see you actually have a baby!!!). The ones who want to ride first go through. Since Dan and I would ride together first we scanned our fastpasses. Grandma waited with Andy. We receive a ticket (like the old paper fastpasses) to use at any time during the day. We always had Grandma ride it right away after we were done, but you could leave the attraction and go back to it later if you’d like. The awesome thing is that 1.) either Dan or I could ride again with my mom when she went and the other person stayed with Andy 2) my mom did not need a fastpass booked for this ride. Just return to fastpass queue with rider switch and they let you through. This could be extremely beneficial in trying to get difficult fastpass rides like Flight of Passage. You can basically use rider switch/baby swap on any ride in Disney that your baby would not be able to ride with you. If you have more rider switch questions, feel free to message me and I can try to help or direct you to someone who can explain better.

Dining with Andy went pretty well. We had one reservation a day. Some meals he slept. Some meals he was awake. Some meals he lost him mind. Just have food for baby and a sense of humour if you are bringing to meals at Disney. And really, having a baby crying at a dining reservation in Disney is the best place for it to happen! There are toddlers having tantrums and grumpy adults all around…a cute 6 month old with tears isn’t too bad. One thing we did change part way into our trip was our final dinner time. We had a 7:45 pm reservation, but Andy had been falling asleep at night by 7:30-8:30 pm. Changed it to 5:15 pm. Smartest move ever. 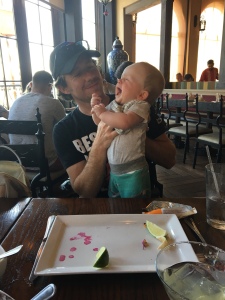 I could talk more about this trip, and I will in two other posts. Those posts will be recaps on the 10km and half marathon. But to end this post, taking Andy to Disney at 6 months worked for our family. Having my mom down there with us in a connecting room was a HUGE part to why the trip was a success and generally went smoothly. If it was just Dan and I down there with him I am not sure we would have enjoyed it as much. I know not everyone has that luxury to have a grandparent travel with them on vacation to help (she watched him in the mornings we did the races and on Sunday night when we went out) and we won’t have her on other family vacations. But for our first trip it helped tons! It was awesome seeing my mom spend time with Andy and getting him to giggle and smile. The pictures we have from this trip will be something we cherish.