A few weeks ago I had a post about “Race Envy.” Well…it struck again. Bad. After completing the Red Deer Super Spartan at the beginning of September, my husband’s cousin and I had the wise idea to drive out to British Columbia a few weeks later to compete in the Sun Peaks Beast. And the Sun Peaks Sprint. I mean, come on….just a mere 10.5 hours away was our chance to earn a Trifecta medal…and do something completely bad ass! We both got on the bandwagon, registered ourselves, and started the planning for our weekend adventure!

Today I am going to touch on our Spartan Beast experience, and in a later post i will talk about the Sprint. The weather for Sun Peaks was not looking promising for race day—-pretty much a chance of rain all day. And cold. And on race morning we found out there was a solid 15 cm of snow near the top of the ski hill we would be climbing. Hello September 28!

We started in the 10:30 am heat. We were fired up and ready to go! The race started at the base of Mt. Tod, which is about 4,200 feet above sea level. We would be climbing up the mountain and back down during our 21km adventure, eventually totaling around 4,000 feet of climbing.

While I have done Spartan Races before, this one provided challenges unlike any other. Basically, take the Montana Sprint and times it by 5, add in polar opposites of weather, and you have an idea of what we faced. There were the standard Spartan obstacles on the course, with the over-under-through being one of the first. The obstacles had to be strategically placed, as the trails we were running were mountain bike or hiking trails up the slope. The obstacles had to be placed in open areas that were relatively flat—-this was hard to come by. Some that could be placed in the trails, like the first rope net, were fun, but got backed up due to the narrowness of the course and the fact you couldn’t have more than one or two people attempt it at a time.

The weather was the biggest factor in the Beast. The higher we got, the more the weather turned. It started out just damp and slightly muddy. And at one point Erin and I did notice little patches of snow flurries at the base of some trees. No biggie. But then the ground started to become a horrendous mix of mud and snow, and then pretty soon just snow and ice. When we got to the Hercules Hoist, we had to climb up a little incline that was covered in fresh wet snow. We would not be messing around. I would dare say we reached blizzard conditions when we got to the highest point of the course, the sandbag carry. 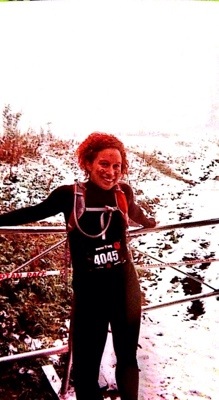 During our descent, you had to go almost as slow as you did going up, due to footing issues, ice, snow and mud. Erin and I used her patented “McLaren Slide” to get down many of the narrow trails—-a squat down to the ground, with both hands anchored behind your butt, and your right leg extended as a guide. I got a sweet bruise almost immediately after sliding over a rock, but it was better than tumbling face first and ruining my whole septoplasty procedure! 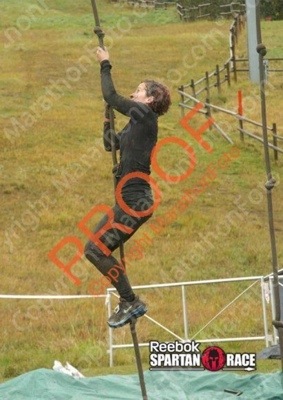 All in all, the race was incredible. Erin and I finished in a respectable time of 3:33:28. They had to shorten the course about 4 km due to the dangerous weather conditions even higher up the hill. We understand and appreciate why they did this, but now we want to make sure to do another Beast in the future so we can do a full 21 km! But, this Beast was my Trifecta Tribe race and I am happy that I had my trifecta be all Canadian races. My Trifecta Tribe medal is being mailed out to me soon, as they did not order enough for the event, but Tara (new friend from Edmonton!) let me borrow hers for a photo in the beer garden! AROO!